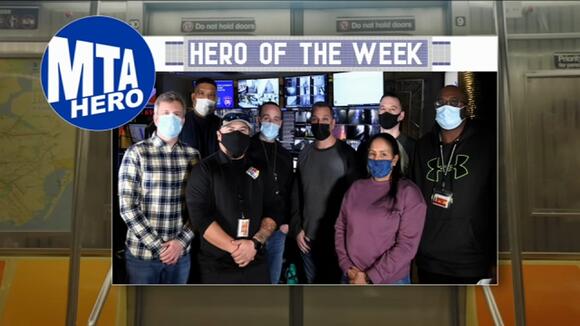 This week's MTA Heroes are the team that helps police solve crimes underground. The MTA is recognizing the Video Retrieval Unit from New York City Transit's security department. Each member of the group has an eagle-eye talent at reviewing surveillance footage from subway stations when police need help. Their work recently helped officers quickly arrest a suspect in a case in the Bronx. The employees that reviewed the footage of the incident and identified the suspect are: Special Inspector Derek Brown, SI Joseph Misiti, and Unit Lead David Lang. The other members of the Unit are Terry Blessings, Radoika Marrero-Cabral, Alejandro Escobar, Joseph Kerins, Dan Low, Jason Thom, Joseph Salzone, and Chantharath Xumphonphakdy. ALSO READ | NJ tow truck driver hailed as a hero after saving driver from crash

Authorities say 25-year-old Andrew Abdullah, who has about 20 prior arrests, was the man seen pacing around the subway car before shooting 48-year-old Daniel Enriquez in the chest, killing him.
NEW YORK CITY, NY・4 HOURS AGO
ABCNY

Omar Bojang, the 18-year-old who was allegedly driving the scooter from which a gunman killed 11-year-old Kyahara Tay, surrendered Monday.
BRONX, NY・23 HOURS AGO
ABCNY

A 19-year-old man is in the hospital after being attacked by another man with a hatchet.
MANHATTAN, NY・11 HOURS AGO
ABCNY

The 90-year-old woman was walking on West 64th Street when a man approached her and took her purse from her walker.
UPPER WEST SIDE, NY・7 HOURS AGO

The manhunt is on for a gunman who shot a man in an unprovoked attacked on a Manhattan-bound subway train.
MANHATTAN, NY・1 DAY AGO
ABCNY

Charges were filed against nearly three dozen alleged gang members who police say rapped about their crimes and beat a pigeon to death with a cane.
BRONX, NY・5 HOURS AGO

Police are investigating two fatal hit-and-run crashes on Long Island that happened not far from each other. Both happened in Suffolk County late Monday night.
SUFFOLK COUNTY, NY・5 HOURS AGO
CNN

MIDTOWN MANHATTAN (WABC) -- Once, not so long ago, pay phones were a common sight all around New York City, and they had been for over a century. But then came cellular phones in the late 1990s, and the number of public phones began to decline. And later, smart phones like the iPhone arrived. And pay phones kept disappearing.
NEW YORK CITY, NY・1 DAY AGO
ABCNY

Three females were killed in a crash near a catering hall on Long Island, as they left a Sweet 16 birthday party.
ACCIDENTS・1 DAY AGO

CONNECT will be launched at nine clinic sites in high-need areas throughout The Bronx, Manhattan, and Brooklyn. They are currently accepting referrals.
NEW YORK CITY, NY・16 HOURS AGO
ABCNY

A federal judge could determine the future of Rikers Island during a hearing Tuesday afternoon on the city's plans to reform the troubled jail amid a possible federal takeover.
NEW YORK CITY, NY・12 HOURS AGO
ABCNY

The City is working to build a massive 2,200-acre park on the land in phases, starting with projects adjacent to surrounding communities.
NEW YORK CITY, NY・8 HOURS AGO
ABCNY

Authorities say it started as some sort of collision involving a jet ski.
MANHATTAN, NY・2 DAYS AGO
ABCNY

The incident at Pier Village in Long Branch, which authorities say quickly got out of hand, created a public safety emergency that resulted in a 9 p.m. curfew imposed by the city.
LONG BRANCH, NJ・1 DAY AGO