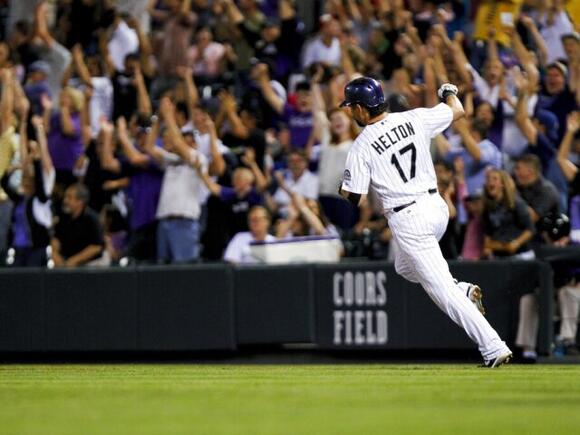 DENVER — Todd Helton continued his climb toward immortality on Tuesday, inching closer to reaching the Hall of Fame.

His vote total increased to 52% in his fourth year on the ballot, well shy of the 75% required, but trending in the right direction. It makes the idea of the first baseman reaching the required threshold reasonable over the next six years.

"I hope so," Helton told Denver7 on Tuesday night.

The writers elected one player , Boston Red Sox legend David Ortiz. He received 77.9% confirmation from the 307 voters, becoming a first-ballot Hall of Famer and the fourth Dominican-born player in Cooperstown.

In their 10th and final year on the ballot, slugger Barry Bonds (66%), pitcher Roger Clemens (65.2) and Curt Schilling (58.6) fell short. Schilling cratered after he wrote a letter to the Hall of Fame last year to remove him from the ballot, while criticizing writers who didn't vote for him.

Alex Rodriguez, who failed multiple PED tests and was suspended, received 34.3% on his first ballot.

Larry Walker was inducted into the Hall of Fame last September, the first ever Rockie to make it. He enjoyed huge jumps on the ballot over his last final years, overcoming lost games and the bias against numbers at Coors Field, the most offensive-friendly ballpark in MLB history before the humidor was installed to store the baseballs in 2002.

Walker's entrance bodes well for Helton. Helton posted 61.8 wins above replacement during his career, slightly below the average for Hall of Fame first basemen (66.0). However, his peak WAR was better than those in the hall — 46.6 to 42.4.

Per Jay Jaffe's research, Helton represents one of 19 hitters with at least a .300 batting average, .400 on-base percentage and .500 slugging percentage and 7,000 career plate appearances.

There have been 55 Hall of Famers who played their entire career with one team. Helton is looking to join that exclusive club.

April 14 (Reuters) - Billionaire entrepreneur Elon Musk took aim at Twitter Inc (TWTR.N) with a $43 billion cash takeover offer on Thursday, with the Tesla CEO saying the social media company needs to be taken private to grow and become a platform for free speech. "I think it's very...
BUSINESS・30 DAYS AGO
NBC News