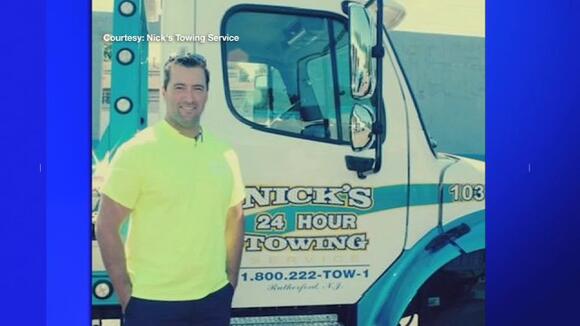 A tow truck driver is being hailed as a hero after saving someone from a fiery crash in New Jersey. John Jay Tashjian was driving on the New Jersey Turnpike early Sunday morning when he noticed a car that crashed and landed in tall grass just outside of Newark. Tashijan acted quickly calling his team at Nick's Towing Dispatch before he rushed over to the burning vehicle. The team at Nick's Towing notified NJ Turnpike Operations of the situation. Tashijan then pulled the driver from the wreck and brought him into the safety of his truck. ALSO READ | Mayor Adams unveils New York City's 'Blueprint for Safety' to combat violence

Moments later the car was engulfed in flames. NJ Turkpike Operations was notified and expedited emergency responders to the scene. Paramedics soon showed up and rushed the driver to the hospital. "I couldn't be more proud of John Jay's efforts." said Nicholas F. Testa, owner of Nick's Towing Dispatch. "He is a courageous young man. In this day and age when most people would simply drive by a scenario like this, he instead jumped into action and put himself in jeopardy to save another person." ---------- * Get Eyewitness News Delivered * More New Jersey news * Send us a news tip * Download the abc7NY app for breaking news alerts * Follow us on YouTube

The 90-year-old woman was walking on West 64th Street when a man approached her and took her purse from her walker.
UPPER WEST SIDE, NY・12 HOURS AGO

Three people were killed and several others were injured in a crash near a catering hall on Long Island, according to police.
NEW HYDE PARK, NY・2 DAYS AGO
ABCNY

A 19-year-old man is in the hospital after being attacked by another man with a hatchet.
MANHATTAN, NY・16 HOURS AGO
ABCNY

Authorities say 25-year-old Andrew Abdullah, who has about 20 prior arrests, was the man seen pacing around the subway car before shooting 48-year-old Daniel Enriquez in the chest, killing him.
NEW YORK CITY, NY・3 HOURS AGO
ABCNY

Authorities say it started as some sort of collision involving a jet ski.
MANHATTAN, NY・3 DAYS AGO
ABCNY

Rachel Nugent, 14, was last seen leaving her residence located at 551 Old Dock Road in Kings Park at approximately 6:45 a.m. Investigators believe she may have taken a train to New York City and may have traveled out of state.
SUFFOLK COUNTY, NY・3 DAYS AGO

Charges were filed against nearly three dozen alleged gang members who police say rapped about their crimes and beat a pigeon to death with a cane.
BRONX, NY・10 HOURS AGO
ABCNY

Authorities say a suspect in a stolen Honda CRV struck an occupied police vehicle that was pulled over on the side of the road before colliding with another vehicle and hitting several pedestrians.
PATERSON, NJ・5 DAYS AGO
ABCNY

The officers' vehicle was struck by a black Mercedes at the intersection of Dyckman Street and Nagle Avenue in Inwood just after 5:30 a.m. Friday.
MANHATTAN, NY・4 DAYS AGO