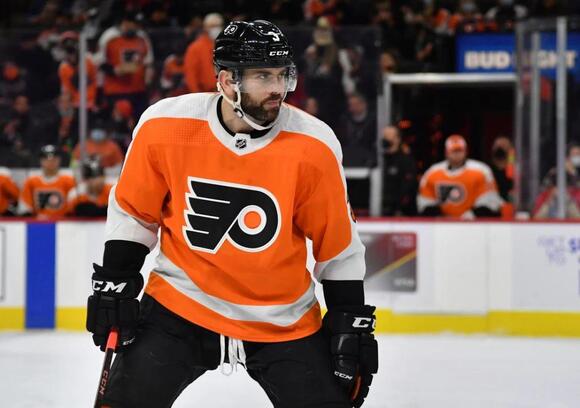 Philadelphia Flyers defenseman Keith Yandle became the NHL’s all-time ironman Tuesday night when he appeared in his 965th straight game by starting for the Flyers against the New York Islanders in Elmont, N.Y.

When the puck dropped between the Flyers’ Scott Laughton and the Islanders’ Casey Cizikas, Yandle — starting on the visitors’ blue line along with Ivan Provorov — officially snapped the tie with Doug Jarvis, who never missed a game in his career while playing in 964 games for three teams from 1975 through 1987.

Yandle, who hasn’t missed a game since he was a healthy scratch for the Phoenix Coyotes on March 22, 2009, stood almost perfectly still and seemed unfazed by the imminence of history as he stood on the Flyers’ blue line alongside Provorov, the latter of whom swayed back and forth during the National Anthem before tapping Yandle with his stick.

Yandle then took a couple laps in the Flyers’ zone before briefly falling into step with right winger Cam Atkinson, who patted Yandle with one of his gloves.

After faceoff, a sizable cheer went up from the crowd at UBS Arena.

The players on the ice tapped their sticks and those on both benches applauded when Yandle’s feat was announced during the first TV timeout with 12:36 left in the opening period. Yandle initially nodded before skating onto the ice, skating in a circle and raising his stick to acknowledge an ovation from the crowd. He then made an appreciative gesture towards the Islanders’ bench.

Jarvis had been the NHL’s ironman since he broke Garry Unger’s record of 914 games while playing for the Hartford Whalers on Dec. 26, 1986. Jarvis’ record was the longest-established ironman record among the four major pro sports, a distinction now held by Cal Ripken Jr., who has held Major League Baseball’s record for consecutive games played since Sept. 6, 1995.

Two notable hitting streaks and a winning streak will be on the line Tuesday night when the St. Louis Cardinals
SAINT LOUIS, MO・1 DAY AGO
Sportsnaut

Flames stare down elimination in G5 vs. Oilers

The challenge to the Calgary Flames is extremely simple heading into Thursday’s home clash with the Edmonton Oilers: Win or
NHL・11 HOURS AGO
Sportsnaut

Senators G Matt Murray (concussion) to be ready for camp

It will be the Miami Heat’s chance to turn the tables in the Eastern Conference finals when they play host
BOSTON, MA・13 HOURS AGO
Sportsnaut

Tarik Skubal ready to go for Tigers against Guardians

Tarik Skubal was the last man standing from the Detroit Tigers’ season-opening rotation. Then in his latest start, he could
CLEVELAND, OH・1 HOUR AGO
Sportsnaut

Tyler Bozak scored at 3:38 of overtime, and the St. Louis Blues rallied to beat the Colorado Avalanche 5-4 in
SAINT LOUIS, MO・4 HOURS AGO

The Chicago Bulls said Tuesday that guard Zach LaVine had successful arthroscopic surgery on his left knee. LaVine, who was
CHICAGO, IL・1 DAY AGO
Sportsnaut

Hurricanes back home, out to stunt Rangers’ momentum

For every bit as good as the Carolina Hurricanes looked in winning all six home games of the current playoffs,
RALEIGH, NC・14 HOURS AGO
Sportsnaut