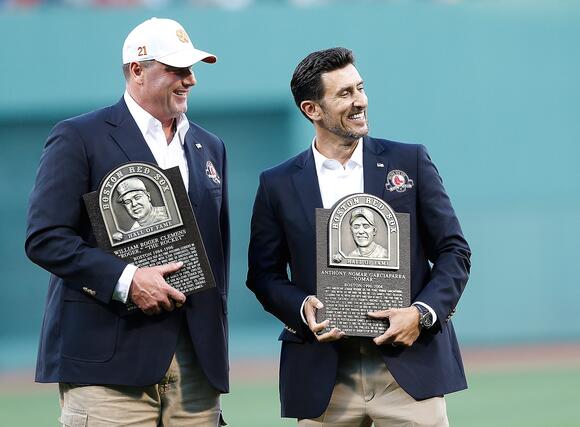 Based on the social media reaction, Evan Roberts’ rant, and the buzz on TV and talk radio, a lot of people are upset that Roger Clemens was once again snubbed by the Baseball Hall of Fame voters, and will fall off the ballot after 10 years of not being elected.

Not among those people? Clemens himself.

Rocket took to Twitter shortly after it was announced that he did not make it in again in 2022, and basically said that making the Hall was never in his sights anyway:

Clemens says in the note that he “put the HOF in the rearview mirror ten years ago” and “didn’t play baseball to get into the HOF,” so “everyone can now close this book.”

Rocket’s ties to alleged PED use were likely the factor in his non-election, although he came very close, and gained ground every year. Clemens got 65.2 percent of the vote this year, third-most behind David Ortiz and Barry Bonds, up from 61.6 percent in 2021, and his totals increased every year in his third through tenth years on the ballot.

Clemens’ 354 wins are ninth-most in MLB history, and his 4,672 strikeouts are third all-time, but he is the only one of the 24 members of the 300-win club not in the Hall, and he and Curt Schilling – who also timed off the ballot this year after not being elected – are the only ones among the 16 eligible pitchers in the 3000K club not in the Hall (CC Sabathia is not yet eligible, and Max Scherzer and Justin Verlander are still active.

There is still a chance, however, for the man whose seven Cy Young Awards are the most in MLB history: Clemens will be eligible in December for consideration by the Today’s Game Era Committee.

The plan is for Rocker to pitch for the Valleycats, who play in the independent Frontier League, starting in June, giving him about a month of action leading up to the 2022 MLB Draft.
NEW YORK CITY, NY・2 DAYS AGO
WFAN Sports Radio

Was Pete Alonso's flyout another victim of deader baseballs? 'I thought that should go over the wall'

Was Pete Alonso’s flyout, which he thought for sure was a home run, another victim of deader baseballs? ‘I thought that should go over the wall.’
MLB・2 DAYS AGO
WFAN Sports Radio

Winker has been a villain to Mets fans since a series in 2019, when he was a Red, where he hit a game-winning homer and made a game saving catch. Now back with the Mariners, Winker said he respects their passion and their back and forth is “special.”
NEW YORK CITY, NY・1 DAY AGO
WFAN Sports Radio

Buck Showalter raves about Max Scherzer: 'It's just an honor to watch him pitch'

Mets manager Buck Showalter raves about Max Scherzer after another dominant outing from the veteran: ‘It’s just an honor to watch him pitch.’
NEW YORK CITY, NY・2 DAYS AGO

With both teams off to terrific starts, Gio and Jerry stacked up the current Yankees and Mets with their best teams ever, 1998 for the Yanks and 1986 for the Mets.
NEW YORK CITY, NY・2 DAYS AGO
WFAN Sports Radio

There was supposed to be a ceremonial first pitch at Citi Field on Friday night, but Max Scherzer began his warm-ups and locked in before it could happen.
NEW YORK CITY, NY・2 DAYS AGO
WFAN Sports Radio

Chapman, Boone deny Chappy 'rattled' by Tim Anderson on base before blown save Saturday

To the naked eye, it looked like Tim Anderson’s one-out single in the ninth rattled Aroldis Chapman, who was rushed and wild against his final two batters - but both Chappy and Aaron Boone disagree.
NEW YORK CITY, NY・1 DAY AGO
WFAN Sports Radio

Despite his two home runs the night before, MLB Network’s Brian Kenny made the case that Giancarlo Stanton is bad for the Yankees, who he says regret making that trade.
NEW YORK CITY, NY・2 DAYS AGO

IKF made a ‘bad read’ when thrown out trying to advance from second to third on Kyle Higashioka’s sacrifice fly, turning a possible one-out, runner on second situation into a killed rally for the Yankees.
NEW YORK CITY, NY・1 DAY AGO
WFAN Sports Radio

Shakira is at Citi Field, and Buck Showalter isn't hiding his excitement

Shakira, the famous music artist, is making an appearance at Citi Field on Saturday for the Mets game, and manager Buck Showalter is pumped up.
CELEBRITIES・1 DAY AGO