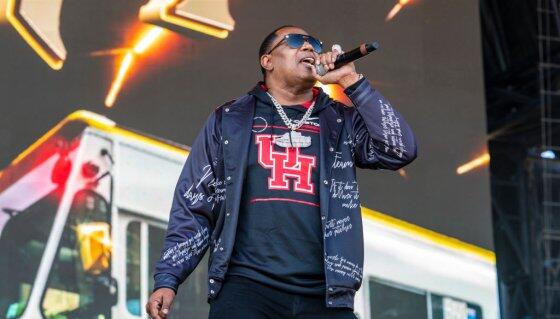 Wack 100 is up to his antics again and recently argued that Master P isn’t holding figures like everyone thinks he does. Well Percy has spoken up and has addressed the hate.

As spotted on Vibe Magazine the internet troll is now speculating that the New Orleans, Louisiana native is penny pinching. In a recent Clubhouse chat the talent manager expressed his doubt on P’s current business ventures. “You think this n***a be selling noodles?” he asked. “The feds took his catalog, bro. Nick Cannon got real money, for real. Real, real money. I’m like, ‘How is [Master P] talking to this n***a about what he doing and you ain’t nowhere in place, my n***a?’ You can’t even stand with this man on a bad day. Who is you, bro, to be telling this n***a about his business decisions and your business decisions ain’t been right for damn near 20 years?!”

While P didn’t address Wack by name his recent Instagram post made it clear he isn’t losing focus by paying attention to any speculative chatter. “BROKE is a mindset HATE is a disease,” he wrote in a clip of him talking to Nick Cannon. “[Nick Cannon] is my brother from another mother. We’ve got a lot of love and respect for each other. We discussed this a couple months ago the three types of people: poor-minded people think and talk about money, rich people collect material things and wealth-minded people produce ideas that create success. The Bible says our people perish from lack of knowledge. As a culture we have to stop comparing, self-hating and tearing each other down. Let’s educate and empower the next generation.”

You can Nick and Master P discuss their history and bond below.

Listen up! Read this and tell me if it describes you and your ancestors or the people who own the diamond industry, Hollywood, and the world banks? "They are a stiff-necked (hard-headed) people", "I will bring you into Egypt (slavery) again ON SHIPS", "your men will have an evil eye towards their brother (violence), toward his wife, and to his kids which he will leave", "the brokenhearted, the captives, and them that are bound", "you will discontinue (forget) your heritage and you will serve your enemies in a foreign land" This is ALL in the bible! The same book that says "I know the blasphemy of them that say they are Jews and are not..." If they were the Jews and not us why do we fit the curses? Why don't they? If they were us how would they "remember this whole time" they were Jews when the bible said the real Jews would forget who they were? Wake up and return to your stolen heritage, we are the Israelites. I'm not looking for a like, please if this speaks to you RESEARCH IT!

It's hard to get through the article with all of the n-word usage. Forget who is broke, it's time to break the poor habit of using the n-word.

why is the next man's pockets anyone else's business anyway??

Fat Joe is now a much wiser Fat Joe. The Don has admitted he was wrong by beefing with Jay-Z and the Roc-A-Fella Records crew. As per Hype Beast you can always count on the South Bronx native for a great interview. In his latest Q&A he sat down with Math Hoffa and crew on the My […]
CELEBRITIES・19 HOURS AGO
HipHopWired

Harlow caused a stir after recently discovering that the R&B singer is the sister of Ray J, sparking a mild back and forth.
CELEBRITIES・6 DAYS AGO
The US Sun

RAY Liotta, the brilliant actor who made his name in Martin Scorsese's crime classic Goodfellas, has passed away. The star died in his sleep in the Dominican Republic, where he was filming Dangerous Waters, according to Deadline. There were no signs of foul play or anything suspicious about the death,...
CELEBRITIES・21 HOURS AGO
Insider

A former employee from TMZ has testified in the Johnny Depp and Amber Heard defamation case that has gripped the world. Morgan Tremaine, who was a former field assignment manager at the publication, took to the stand to claim he dispatched photographers to get pictures of Amber at court in LA in May 2016 after they were tipped off.
CELEBRITIES・1 DAY AGO
People

Shanna Moakler is wishing her ex-husband Travis Barker and his new wife Kourtney Kardashian the best. The Celebrity Big Brother alum recently shared her feelings on the Blink-182 drummer's wedding to the Poosh founder, and she also discussed her connection to Barker moving forward. "I wish the happy couple a...
CELEBRITIES・19 HOURS AGO
HipHopWired

One of New York City’s greatest talents has received a special distinction. Remy Ma has been honored with a street in her name. As per Vibe Magazine the “All The Way Up” rapper is now officially in the Big Apple history books. Earlier this week a ceremony was held to unveil the newest addition to the […] The post Big Bronx Energy: Remy Ma Honored With Street In Her Name [Video] appeared first on The Latest Hip-Hop News, Music and Media | Hip-Hop Wired.
BRONX, NY・9 DAYS AGO
HipHopWired

The cause of the untimely death of YSL rapper Lil Keed still hasn’t been determined, but details are coming to light surrounding his health. The Atlanta rapper was reportedly suffering from stomach pain severe enough that it sent him to the hospital before his untimely passing. As previously reported, Keed died late last week, with […] The post YSL Rapper Lil Keed Suffered From Severe Stomach Pain Before Death appeared first on The Latest Hip-Hop News, Music and Media | Hip-Hop Wired.
ATLANTA, GA・9 DAYS AGO
HipHopWired

However, it looks like the beef between the past collaborators escalated after Gibbs was allegedly beaten by goons affiliated with Benny The Butcher. The post Freddie Gibbs Allegedly Catches B$F Taper & The Fade In Buffalo From Benny The Butcher’s Goons? appeared first on The Latest Hip-Hop News, Music and Media | Hip-Hop Wired.
BUFFALO, NY・9 DAYS AGO
Cinemablend

Viewers were suspicious when a Texas affiliate cut into Jimmy Kimmel's pre-taped monologue addressing the state's school shooting, and now it's been addressed.
DALLAS, TX・22 HOURS AGO

Get Your Loonies Up: Drake Confirms OVO Fest Will Return In 2022

We guess we can take this as a sign of nature finally healing. Drake's OVO Fest will return in 2022. The post Get Your Loonies Up: Drake Confirms OVO Fest Will Return In 2022 appeared first on The Latest Hip-Hop News, Music and Media | Hip-Hop Wired.
MUSIC・10 DAYS AGO
HipHopWired

Rihanna and A$AP Rocky are now the proud parents of a baby boy. Reportedly, the Bajan singer gave birth to the couple’s first child last week. Apparently, this is old news for some since TMZ reports that the bundle of joy actually arrived on May 13. If we’re keeping it a bean, speculation began spreading […] The post Rihanna & A$AP Rocky Welcome Baby Boy appeared first on The Latest Hip-Hop News, Music and Media | Hip-Hop Wired.
MUSIC・7 DAYS AGO
HipHopWired

Check out the rest of today’s drops and some joints you might’ve missed over the weekend including work from Moneybagg Yo featuring Kodak Black, Toosii, and more. The post Vic Mensa & Chance The Rapper “Wraith,” Ne-Yo “Don’t Love Me” & More | Daily Visuals 5.16.22 appeared first on The Latest Hip-Hop News, Music and Media | Hip-Hop Wired.
MUSIC・10 DAYS AGO
HipHopWired

Flava, You ARE The Father: Flava Flav Finds Out He Has A 3-Year-Old Toddler

In today’s episode of Flava Of Love Child, Hip-Hop icon Flava Flav has been informed, at 63-years-old, that he is the father of an eighth child. According to TMZ, a paternity test has proven the Public Enemy hype man and Hip Hop producer has a 3-year-old son named Jordan, whose mother is Flav’s former […]
RELATIONSHIPS・4 DAYS AGO
HipHopWired

MF DOOM Biography In The Works From Veteran Music Journalist

The late Daniel Dumile was something of an enigma, and a new biography hopes to partially lift the veil of the "Supervillain."
CELEBRITIES・6 DAYS AGO
HipHopWired

The enigmatic, extended and elusive path toward the release of Kanye West’s 11th album, DONDA 2, continues. The announcement of a new soundtrack tied to the documentary on late rapper XXXTentacion includes a song that features Kanye West and is scheduled to be on the “proper” release of the aforementioned, mythical album.   YE & […]
CELEBRITIES・3 DAYS AGO
HipHopWired

Doja Cat Drops Out Of The Weeknd’s Summer Tour, Slated To Have Surgery

The "Say So" singer shared that she'll drop out The Weeknd's summer tour in order to recover from tonsil surgery.
MUSIC・6 DAYS AGO