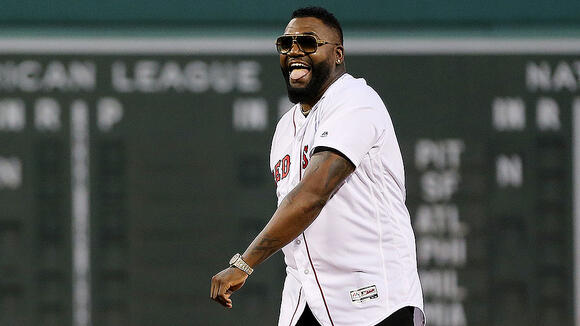 BOSTON (CBS) — David Ortiz got a very important phone call on Tuesday night, letting him know that he is now a Baseball Hall of Famer. Big Papi was pretty pumped to receive that call.

Ortiz was in the Dominican Republic surrounded by family and friends — including former Boston teammate and fellow Hall of Famer Pedro Martinez — when he received the news from Jack O’Connell of the BBWAA.

“I’m calling you from Cooperstown, New York to let you know that the baseball writers have elected you to the National Baseball Hall of Fame,” O’Connell told Ortiz.

With that, Ortiz threw his arms in the air and let out an emphatic “YES!” before giving his father and Martinez a massive bear hug. The Red Sox shared that moment with the world on Twitter shortly after Ortiz received the news:

That is just pure joy on everyone’s face. (And what a sweet shirt on Big Papi!)

Ortiz became the 58th player to make it in on his first try and just the fifth Red Sox player to be a first ballot Hall of Famer, joining Martinez, Wade Boggs, Carl Yastrzemski and Ted Williams. Ortiz is only the fourth Dominican Republic native to be elected to the Baseball Hall of Fame.

“For a young boy from Santo Domingo, I always dreamed of playing professional baseball. Thanks to the encouragement of my father, Leo, and my mother, Angela Rosa, I knew from my earliest days at Estudia Espaillat High School in the Dominican Republic that I had the opportunity to pursue my dream of playing in the big leagues,” Ortiz said in a statement shortly after Tuesday’s announcement. “And while my path to success was not straightforward, it was my friend, the Hall of Famer, Pedro Martinez, who convinced the Red Sox to give me a chance to achieve success. And while my path to Boston took 10 years, those 14 years in a Red Sox uniform were the best of my life. We broke the curse and then got two more championships before I retired in 2016—what a sweet and beautiful journey it has been.

“I am so thankful to my family and my children for being with me tonight on this special recognition,” Ortiz added. “And I know my mother is throwing me kisses from heaven just like I always threw her a kiss after every home run.”

BOSTON -- Red Sox pitching prospect Josh Winckowski is expected to make his big league debut this weekend. Manager Alex Cora said Wednesday that Winckowski will likely start the second game of Boston's double header with the Baltimore Orioles on Saturday.Winckowski, a 23-year-old righty, was acquired from the Mets in a three-team trade last February that sent Andrew Benintendi to the Kansas City Royals. (Franchy Cordero also came to Boston in the trade.) He is currently the 13th-ranked prospect in the Boston farm system.Added to the Red Sox 40-man roster last November, Winckowski has spent the 2022 season with Triple-A Worcester. He owns a 3.13 ERA and 34 strikeouts to just six walks over 31.2 innings over seven starts. Winckowski split his 2021 season between Double-A Portland and Triple-A Worcester. He made 23 appearances for the two teams, 23 of which were starts, and compiled a 9-4 record with a 3.94 ERA while striking out 101 batters over 112 innings pitched.
BOSTON, MA・1 DAY AGO