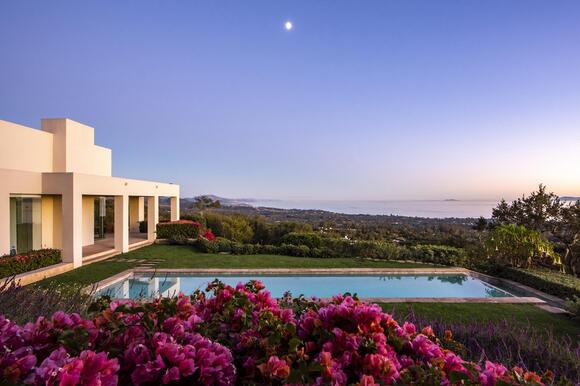 Publishing heiress Virginia Hearst Randt has made swift work of dispatching her trophy Montecito estate. First offered last November at nearly $9 million, the house sold in mid-January in a cash deal — albeit for a heavily discounted $7.5 million. Still, that sale price rings in at a hefty $2 million more than what Hearst paid for the property nearly a decade ago, way back in March 2012. Records indicate the buyer is veteran Broadway producer and philanthropist Thomas “Tom” Perakos, who is known for being the primary financial backer of “ The Band’s Visit ,” winner of 2018’s Tony Award for Best Musical.

As for Randt, she’s the second of Randy Hearst’s five daughters — five years older than her sister Patty Hearst, who was (in)famously kidnapped in 1974 — and a granddaughter of media baron William Randolph Hearst. Now 72, Randt mostly keeps a low public profile, though she has served on the board of directors at Hearst Corporation, the $11-billion-a-year media juggernaut that has long financially supported Hearst family members.

Randt’s Montecito castle is a bit less grandiose than her grandfather’s San Simeon landmark . Spanning just under 3,500 square feet of living space, the contemporary home features two bedrooms, both of them equipped with ensuite full bathrooms, and a separate powder room. There’s also a detached guest cottage with another bedroom and bathroom.

Designed by acclaimed Santa Barbara architects Warner & Gray , the 2001-built structure pays clear visual homage to contemporary mansions of the late ’90s, and likewise boasts more than a passing resemblance to some of Ricardo Legorreta’s more widely published homes, though it’s distinctly more whitewashed and neutral rather than playfully colorful throughout. But the real value of this property is in the land itself, which spans 4.3 hilltop acres in prime Montecito with spectacular views of downtown areas, the Santa Ynez hills and always-sparkling Pacific Ocean on the horizon.