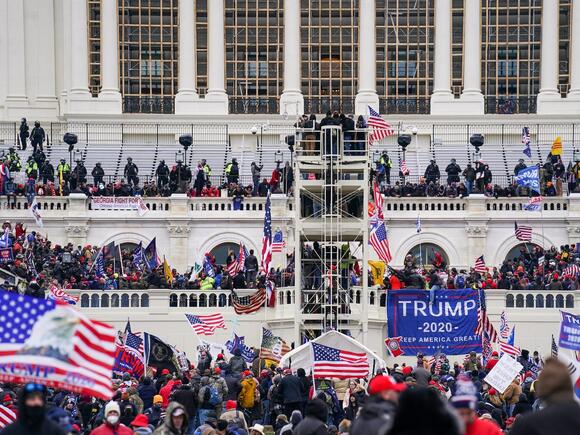 A Georgia lawyer who made multiple threatening social media posts in the aftermath of the January 6 attack will head to trial later this year after rejecting a government plea deal earlier this month.

William McCall Calhoun Jr. faces three charges stemming from his role in the insurrection, including a felony count of obstructing an official proceeding, as well as entering a restricted building and violent entry or disorderly conduct.

As the government works to prosecute the more than 760 people arrested in connection with the attack, federal prosecutors have offered several Capitol rioters a lesser charge in exchange for guilty pleas. But during a Monday status hearing, Calhoun's legal team announced he had declined the government's plea deal, according to WUSA.

If convicted of the felony obstruction charge, Calhoun could face up to 20 years in prison.

Prosecutors say Calhoun documented his participation in the Capitol riot with detailed social media posts that included photos and videos. In one Facebook post from January 6, Calhoun wrote that he was among "the first of us who got upstairs kicked in Nancy Pelosi's office door and pushed down the hall toward her inner sanctum," according to charging documents.

"Crazy Nancy probably would have been torn into little pieces, but she was nowhere to be seen," Calhoun reportedly wrote in one post.

In another, Calhoun said he helped "bring our Government to its knees," and vowed to return "armed for war," according to screenshots of his posts included in charging documents. He also admitted to overrunning multiple police barricades and swarming the building looking for members of Congress in his Facebook posts.

But prosecutors say Calhoun was posting threatening political posts even before the insurrection, which prompted an anonymous tipster to alert the FBI to the lawyer's social media presence in November 2020. The unnamed tipster told the FBI that Calhoun had posted a message encouraging people to storm Washington, DC, while openly carrying firearms, according to charging documents.

The caller also alleged that Calhoun wrote "some of you will live long enough to be exterminated with extreme prejudice," and "we are going to kill every last communist who stands in Trump's way."

In a lengthy statement to Insider, Calhoun maintained that his conduct at the Capitol was nonviolent and part of a peaceful protest.

"In sum, my 'crime' was that I peacefully walked through the Capitol and took videos — this is 100% corroborated by the Capitol's video cameras," Calhoun said.

Calhoun repeated several falsehoods in the statement, emphasizing his continued belief in the false notion that President Joe Biden lost the election to former President Donald Trump; accusing the "Democrat controlled DOJ" of persecuting him; and suggesting that the prosecution of Capitol rioters amounts to "communism."

"I will not be intimidated, and I will never bend the knee to the Communists by pleading guilty to something I did not do," he said.

An attorney for Calhoun said she supported her client's decision to decline the plea offer.

"I think he made the right decision, and I am confident that the evidence will show that he is not guilty of what he is being charged of," Jessica N. Sherman-Stoltz said. "I look forward to proving his innocence at trial."

Calhoun was arrested with his friend, Verden Andrew Nalley, in January 2021 and charged the next month. In December, Nalley pleaded guilty to one count of entering and remaining in a restricted building.

Calhoun is due back in court in April where a federal judge is set to announce a trial date.

To begin you journey as an attorney in this country you must swear on a Bible to uphold the laws of this country. Should he be found guilty he should be stripped of his credentials.

now he is going to say something about his first amendment rights or that you misunderstand what he was saying. Good felony conviction is on the way. hopefully.

I really can't believe not many Trumplicans have posted on this. I might regret saying this but, I kind of miss putting them in their place lol

Former Trump lawyer Michael Cohen threw his former boss under the bus on Monday, appearing to contradict claims that the former president does not possess the documents New York Attorney General Letitia James is after.
POTUS・28 DAYS AGO
Business Insider

In the hours after the riot, McConnell spoke briefly about his intentions to quash Trump's influence within the GOP.
CONGRESS & COURTS・29 DAYS AGO
WashingtonExaminer

This is the surreal moment 21 migrants were found concealed inside two wooden crates during a traffic stop in Texas. The shocking findings took place April 6 when state troopers and U.S. Border Patrol agents pulled over a pickup truck and disrupted the human smuggling attempt in Laredo. Footage released...
LAW ENFORCEMENT・29 DAYS AGO
Newsweek

"This should never have been allowed to occur to my colleague," Representative Matt Gaetz said about the legal challenge seeking to disqualify Greene.
GEORGIA STATE・29 DAYS AGO
Daily Mail

The United States' top military officer warned soldiers graduating from West Point Saturday to prepare for a 'significant international conflict' with Russia and China - a skirmish he said will see the cadets battle robotic tanks, ships, and planes. 'You'll be fighting with robotic tanks and ships and airplanes,' General...
MILITARY・2 DAYS AGO
CNN

CNN — Sarah Huckabee Sanders will win the GOP nomination for governor of Arkansas, CNN projects, putting her in strong position to win the governorship in this red state in November. The 39-year-old former Trump White House press secretary enjoyed the support of former President Donald Trump and easily...
ARKANSAS STATE・12 HOURS AGO

A sheriff in Florida arrested his own daughter on drug charges as his department continues its war on addictive substances. Franklin County Sheriff A.J. Smith gave a statement on April 19 confirming that his daughter, Kristen Kent, had been arrested under suspicion of meth trafficking two days prior. "Methamphetamine does...
FLORIDA STATE・28 DAYS AGO
MSNBC

Colorado Governor Jared Polis cited the "impacts of inflation and the cost of living" as reasons for the tax rebate program.
COLORADO STATE・29 DAYS AGO
Business Insider

If Roe v. Wade is tossed it would mark the first time the Supreme Court overturned precedent 'to limit civil rights, not expand them,' expert says

"Instead of using the Constitution to expand rights" overturning Roe v. Wade would limit the rights of Americans, an expert told Insider.
CONGRESS & COURTS・2 DAYS AGO
Fox News

In the latest set of text messages between the Fox News host and Trump's former chief of staff, Meadows told Hannity to "Stress every vote matters."
PRESIDENTIAL ELECTION・29 DAYS AGO
americanmilitarynews.com

"It's like the disinformation board on steroids. Another way to look at is the Patriot Act for American citizens," Sen. Josh Hawley said.
BUFFALO, NY・2 DAYS AGO
Business Insider

Lockheed Martin's political action committee spent more than $250,000 in April donating to the campaigns of members of Congress and other political committees, new records show.
CONGRESS & COURTS・1 DAY AGO