Father dying of Covid regrets not getting vaccine in heartbreaking texts 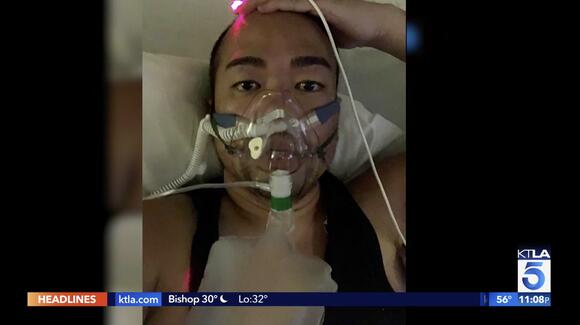 Shortly before dying of Covid-19 , a father in Los Angeles texted family members to express his regret over not getting vaccinated.

Christian Cabrera, 40, tested positive for the coronavirus around Christmas. Not long afterward, he was in an emergency room with pneumonia in both lungs.

“I can’t breathe again,” he texted his brother, according to KTLA . “I really regret not getting my vaccine. If I can do it all over again I would do it in a heartbeat to save my life. I’m fighting for my life here and I wish I [had] gotten vaccinated.”

On 22 January, Mr Cabrera died. His family shared the tragic news on a GoFundMe raising money for his three-year-old son, Noel.

“We are very sad to announce that our beloved brother Christian Cabrera … has lost his battle with Covid pneumonia and passed away tonight,” Mr Cabrera’s brother, Jino Cabrera, wrote in the fundraiser. “He touched so many people’s lives because he was a very loving, kind, generous, caring person with a beautiful heart and soul.”

Even before Mr Cabrera’s death, his brother said, he worried he might not survive.

“He keeps saying, ‘Please take care of my son,’” Jino told KTLA last Thursday. “He knows he might not make it. He might die in there.”

Covid cases in Los Angles are currently dropping from their Omicron-era peak, but they’re still extremely high. As of 24 January, the city was facing an average of almost 33,000 new infections per day. And on 20 January, just two days before Mr Cabrera died, LA County reported 102 deaths from the virus in a single day – the highest number in a year.

“Our hearts go out to everyone mourning the loss of a loved one as we are once more witnessing the utter misery caused by COVID,” Dr Barbara Ferrer, the city’s public health director, said last week. “Let’s not fool ourselves by not recognizing the danger presented by the Omicron variant, which is capable of spreading with lightning speed and causing serious illness among our most vulnerable residents.”

Helen Skelton has revealed that she has separated from her husband, rugby player Richie Myler.The Countryfile host announced the news in an Instagram statement, writing that Myler has “left the family home”.Skelton’s announcement comes just four months after they welcomed their third child.“Very sad to say that Richie and I are no longer a couple,” she wrote. “He has left the family home. We will be doing our best to co parent our small children.”Skelton, who married Myler in 2013, accompanied the post with two broken heart emojis.The pair have three childen together: Ernie, aged six, Louis, aged...
CELEBRITIES・20 DAYS AGO
Davenport Journal

Unfortunately, the 27-year-old mother and the 31-year-old father say their baby daughter has months to live. The 1-year-old child is suffering from a rare condition which was caused by a gene defect both parents carry. The parents knew something was wrong with their child when the baby started to go off her food at six weeks. The baby also started to lose weight, the couple said. The condition was confirmed with genetic testing and the doctors said it affects her ability to absorb the nutrients she needs from food. The condition is so rare it is thought to only occur in one in 79,000,000 people, the doctors said.
WEIGHT LOSS・21 DAYS AGO
Hello Magazine

Robin Roberts got emotional as she opened up about her relationship with partner Amber Laign, especially in the midst of a challenging health battle. The Good Morning America star made an appearance on The Ellen DeGeneres Show to promote her new book, Brighter By the Day. VIDEO: Robin Roberts enjoys...
CELEBRITIES・21 DAYS AGO
Daily Mail

Walking at a brisk pace for just 75 minutes every week could cut your risk of depression, a new study finds. The World Health Organization recommends everyone should exercise for at least two-and-a-half hours every seven days. But researchers at Cambridge University, England, found adults who got half as much...
FITNESS・21 DAYS AGO

Andrea Lynn Hayslette lived in Surfside Beach, South Carolina with her husband Larry and their two children; 5-year-old Ryan and 2-year-old Katie. According to The Charley Project, the 29-year-old was a straight-A student at Coastal Carolina University and she worked part-time.
SURFSIDE BEACH, SC・22 DAYS AGO
The US Sun

WHEN little Rio Fowler started to vomit and suffer with diarrhoea, his parents feared he'd been struck by a tummy bug. Mum Karen and dad Ryan said their daughter who was in pre-school had gastro so thought he had caught it off her. The 15-month-old had to be taken to...
KIDS・20 DAYS AGO
Grazia

Gender reveals have firmly become part of the 21st-century parenting journey. While once you had simply to decide whether to wait until your due date to know the sex of your baby, now you have the option of whether to shower your nearest and dearest with pink or blue fireworks, balloons, confetti, or cake to announce the big boy or girl baby news.
FAMILY RELATIONSHIPS・25 DAYS AGO
The US Sun

MILLIONS of Brits have been urged to take up a rapid test to see if they have bowel cancer. The Health Secretary has called on men over 60 to make sure they have the life-saving checkups. It couldn't be easier - with a home testing kit on offer, or use...
CANCER・22 DAYS AGO

A MUM has issued an urgent warning after her son collapsed and started having a fit after having just two puffs on an e-cigarette. Spencer Smith, from Honeywell, was 16 at the time and ended up being rushed to A&E and fighting for his life after inhaling from a vape.
WORLD・21 DAYS AGO
Newsweek

Bodycam footage captured the snake slithering around the room as an officer attempted to capture it.
BOYNTON BEACH, FL・20 DAYS AGO
The US Sun

WEDDINGS are meant to be happy occasions where loved ones come together to celebrate a new union. But, as we all know, there’s usually some drama involved during every stage of the planning. One woman has received backlash online because of the location she chose to marry her second...
RELATIONSHIP ADVICE・21 DAYS AGO
Chip Chick

2 Years Ago, She Disappeared On Mother's Day And Her Daughter Is Convinced That Her Neighbor Had Something To Do With It

It was May 10th, 2020 when 47-year-old Echo Lloyd vanished right out of her home located in Edwards, Missouri. Earlier that day, Echo's daughter Kelsey drove over to give her some Mother's Day presents consisting of flowers and a card. When her mom didn't answer the door, Kelsey placed her presents right there on Echo's porch. But 3 days later when Kelsey still had not heard from her mom, she reported her as missing. In the days between Kelsey going to her mom's house to deliver her presents and reporting her mom missing, Kelsey called her mom multiple times, though her mom never picked up...
EDWARDS, MO・20 DAYS AGO
Newsweek

Megan Fox wants her kids to express themselves however they please. In a wide-ranging interview with Glamour U.K. for their April cover story, the 35-year-old actress opens up about how she teaches her children, Journey River, 5, Bodhi Ransom, 8, and Noah Shannon, 9, about gender identity and encourages them to be confident in who they are.
FAMILY RELATIONSHIPS・20 DAYS AGO
The Independent

A wedding caterer has been praised for turning down all events where the bride and groom are asking their guests to pay for their own meals.In a recent post shared on the discussion-based site Mumsnet, a user explained that they run a “wedding catering company” that is “based on a food truck” and works for “less formal weddings”.They then revealed that some couples who have reached out to them about catering have been expecting their guests to purchase their own dinners at their weddings, a concept that the caterer said they have been “turning down” because they believe it is...
RELATIONSHIP ADVICE・21 DAYS AGO
Shreveport Magazine

According to the boy’s mothers, a teacher at the charter school decided to cut their son’s hair while he was in distress, instead of calling them for help. Now, the mothers claim that this will not go unnoticed until everyone is held accountable. The boy’s parents were reportedly upset that the teacher didn’t find a more effective way to help their son aside from cutting his hair. The boy’s mothers also said that their son was proud of the afro he was growing. “What made her think that this is OK? if you were going to help my child why wouldn’t you do it the proper way, common sense way, the helpful way? By getting him some real help?” one of the mothers said.
MINNESOTA STATE・20 DAYS AGO
Newsweek

The poster offered a solution for what someone should do should they see someone in the restroom they don't think matches the sign on the door.
RELIGION・21 DAYS AGO
The Independent

Dementia Action Week: What are the symptoms and how can you spot the early signs?

Britain observes Dementia Action Week from 16-22 May, recognising a cognitive condition that affects an estimated 900,000 people in the UK.The term “dementia” does not refer to a single specific ailment but rather a collection of symptoms occurring as a result of a disease like Alzheimer’s causing damage to the nerve cells that transmit messages from the brain.It is particularly common among the elderly, with one person in 14 people aged over 65 experiencing the condition and one in six aged over 80, with women statistically more likely to suffer than men.Everyone experiences the condition differently but common symptoms of...
DISEASES & TREATMENTS・17 HOURS AGO
The US Sun

WHEN a young mom shared the rules she has in place for her toddler son, she expected backlash – especially because she doesn't allow others to give her child sugar and won't force him to share. Thousands of people weighed in on the mom's parenting choices, with some labeling...
FAMILY RELATIONSHIPS・20 DAYS AGO
musictimes.com

Andrew Woolfolk, popularly known for being Earth, Wind & Fire's longtime saxophonist, has passed away at the age of 71; what was his cause of death?. Fellow bandmate Philip Bailey took to Instagram to confirm the tragic news and recalled their early years, saying they met in High School and quickly became friends and bandmates.
BILOXI, MS・20 DAYS AGO