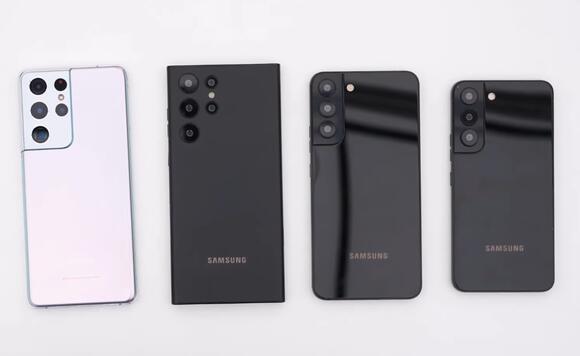 We’re now less than a month away from Samsung’s reveal of the Galaxy S22 . Well, Samsung hasn’t actually announced the phones yet, but it has confirmed that its next Unpacked event will take place in February . That’s where we expect to see the reveal of their next generation Galaxy smartphones. But you won’t have to wait that long to see high-quality renders of all three Galaxy S22 models, as a prolific leaker just shared them on Twitter.

Rumors about the designs of the Galaxy S22 models have been swirling for months. Even before Evan Blass published a set of press renders on Tuesday, we knew that the Galaxy S22 and Galaxy S22 Plus would look virtually identical to the 2021 predecessors. Meanwhile, after skipping the Galaxy Note 21 last year, the Galaxy S22 Ultra would absorb many of the Note’s key features. That appears to be the case, as you’ll see below:

At a glance, you might mistake the Galaxy S22 for a Galaxy S21. The design is unchanged, although the side button and volume rocker do appear to be slightly lower than they were last year. The display should once again be around 6.1 inches, and all three models will be powered by the new Snapdragon 8 Gen 1 chipset.

Once again, we see another familiar design on the Galaxy S22 Plus, which should feature a 6.5-inch display. All three models will also have 120Hz dynamic AMOLED displays.

And now we come to the Galaxy S22 Ultra, which is the clear highlight of this year’s lineup. There are three key changes to the design worth noting. The first is the shape of the phone. Samsung has flattened out the edges of the Galaxy  S22 Ultra, similar to what Apple did with the iPhone 12 and iPhone 13. It looks almost nothing like the other S22 models.

There is also no longer any separation between the camera array and the rest of the rear panel. Instead, the rear camera lenses are simply embedded throughout the top-left corner. Finally, the S22 Ultra does indeed ship with an S Pen. The S Pen is black, but the clicker at the top matches the color of the phone. We can’t see it, but there is a slot for the S Pen.

Be sure to check out Blass’s Twitter thread for a wider variety of colors.

When are Samsung’s new phones coming out?

Every new version of iOS includes hundreds of features and bug fixes for the iPhone. In fact, there are often so many big changes that some of them go unnoticed by a majority of users. That was certainly the case for Visual Look Up on iOS 15, which can help you identify plants, animals, landmarks, and more with the tap of a button.
CELL PHONES・2 DAYS AGO
BGR.com

With June creeping up around the corner, we’re only a few short months away from Apple introducing its 2022 iPhone 14 lineup at a special event in September. While iPhone designs since the iPhone X haven’t changed that drastically, the iPhone 14 is poised to shake things up. According to several credible reports, Apple’s iPhone 14 Pro models will ditch the famed notch entirely.
CELL PHONES・1 DAY AGO
BGR.com

Apple is widely expected to announce the next-gen AirPods Pro model in the second half of the year. A recent report offered a tentative launch date for the AirPods Pro 2, indicating that Apple might unveil the new wireless earphones at the same time as the iPhone 14 this September. The same report said that Apple tested AirPods Pro 2 models with USB-C connectivity instead of Lightning. But an insider now says that Apple will stick with Lightning for the new AirPods Pro model.
ELECTRONICS・1 DAY AGO
BGR.com

It seems reasonable to expect first-party accessories from huge technology companies to have at least the same level of quality as third-party products. Unfortunately, that does not seem to be the case for Google’s Pixel 6 cases. As spotted by The Verge, reviews on Amazon reveal a number of major issues with Google’s official case for the Pixel 6.
ELECTRONICS・18 HOURS AGO
BGR.com

NASA recently celebrated 32 years of Hubble observations. The space telescope was launched back in 1990. Since its launch, it has managed to complete over 1.4 million observations. Now, a physicist named Casey Handmer has combined all of those observations into one breathtaking image. This is what all 1.4 million...
ASTRONOMY・2 DAYS AGO
BGR.com

We recently updated our roundup of the best Memorial Day 2022 sales available right now. You’ll find so many crazy deals in there, but that’s just the tip of the iceberg. On top of all that, there are so many great daily deals you need to check out.
SHOPPING・2 HOURS AGO
BGR.com

Sure, Memorial Day 2022 means you’ve got a long weekend coming up. But it also means there are tons of incredible deals out there to take advantage of!. Today, you’ll find so many spectacular sales to check out. There’s a big one-day sale on popular mosquito repellers and a laser hair removal gun that people are obsessed with.
SHOPPING・3 DAYS AGO

Since I test new gadgets all the time, I probably appreciate smart Wi-Fi-connected devices more than most people. The amount of convenience afforded by gadgets like robot vacuum cleaners and smart locks is fantastic. On top of that, there are new types of smart devices that hit the market all the time.
ELECTRONICS・2 DAYS AGO
BGR.com

First things first: you need to see our roundup of the best Memorial Day 2022 sales out there. You’ll find so many fantastic deals, but they won’t last much longer. Once you’re done with that, it’s time to check out some of the awesome daily deals we found on Tuesday.
ELECTRONICS・2 DAYS AGO
BGR.com

Get a Ring Video Doorbell for $52 in this Amazon sale

There are some smart home devices that everyone should have. And when it comes to smart home devices, you should always be on the lookout for Ring doorbell deals. It doesn’t matter whether or not you’re tech-savvy. As a matter of fact, it doesn’t even matter if you have no idea what the actual definition of a smart home device is. You’ve still undoubtedly heard of gadgets like Echo speakers and smart plugs.
ELECTRONICS・5 DAYS AGO
BGR.com

Memorial Day 2022 is just days away, which means all the best sales are now in full swing. Needless to say, you’ll find the lowest prices of the season from Amazon, Target, Best Buy, and all the top retailers. From robot vacuums and other smart home gadgets to Apple...
SHOPPING・3 DAYS AGO

New videos captured by the ESA and NASA’s Solar Orbiter showcase the Sun in a brand-new light. The videos were captured during the probe’s first close perihelion passages. This is, of course, just the first time that the space probe will zoom in on the Sun’s details. But that doesn’t make things any less exciting.
ASTRONOMY・6 DAYS AGO
BGR.com

Apple buying gaming studio EA might seem like a strange proposition, but it wouldn’t be the craziest deal we’ve seen in recent months. Microsoft bought Activision Blizzard for $69 billion. Then, Sony got Bungie for $3.6 billion. Microsoft and Sony are active players in the console gaming business, so the acquisitions are logical developments.
BUSINESS・2 DAYS AGO
BGR.com

With one week until Memorial Day 2022, the deals are definitely heating up. You won’t believe how many deep discounts I found today on best-sellers. To start things off, #1 best-selling Beckham Hotel Collection bed pillows are down to $12.90 each. That’s the best price of 2022 for pillows with 127,000 5-star Amazon ratings.
ELECTRONICS・5 DAYS AGO
BGR.com

Google Chrome just got a new feature that should excite some users. Google is making it easier than ever to perform Google Lens image searches inside the Chrome browser. It all happens on the page where you found the image of interest, with results showing up in a panel that opens alongside the page. That means you won’t have to move between different tabs as often. And you’ll get the search results faster than before.
SOFTWARE・1 DAY AGO
BGR.com

There are so many amazing daily deals out there on May 22nd that you might feel overwhelmed. Don’t worry because that’s why I’ve narrowed things down and rounded up the best of the best. For example, best-selling smart plugs with Alexa and Google Assistant can be had...
ELECTRONICS・4 DAYS AGO
BGR.com

PS4 and PS5 owners, rejoice. PlayStation kicked off its annual Days of Play spring sales event on Wednesday, May 25th, discounting hundreds of games as well as controllers, accessories, and more. If you were waiting for the right time to give your game library a boost, then you are going to want to check out these deals before they expire.
VIDEO GAMES・20 HOURS AGO
BGR.com

Spider-Man: No Way Home hits HBO Max in July, but not in the US

From the moment the latest Spider-Man movie hit theaters, fans had one question on their minds: When is Spider-Man: No Way Home streaming on Disney Plus? Unfortunately, the answer to that question is not as simple as you might expect. This movie doesn’t have a 45-day theatrical window. It’s also a Sony movie, so Spider-Man: No Way Home will hit other streaming services before Disney Plus, like HBO Max.
MOVIES・18 HOURS AGO
BGR.com

When will Doctor Strange in the Multiverse of Madness stream on Disney Plus?

Doctor Strange in the Multiverse of Madness has crossed $700 million at the box office despite a significant drop in the second weekend. The movie should top $1 billion globally by the time it’s done with the theatrical window. But some MCU fans will wait until Doctor Strange in the Multiverse of Madness hits Disney Plus to see the sequel. Others are awaiting the Disney Plus release so they can rewatch the film at home, where they can control the playback and watch extras.
MOVIES・4 DAYS AGO