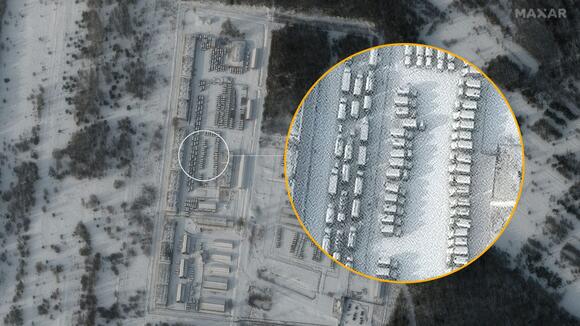 At least 8,500 U.S. troops were put on "high alert" Monday for possible deployment to Eastern Europe as fears rise over the threat of a Russian invasion of Ukraine.

The soldiers could either be part of a rapid response NATO force of 40,000 or used "if other situations develop" with the 127,000 Russian troops deployed near Ukraine, according to John Kirby, Pentagon press secretary.

There are no plans to send U.S. troops into Ukraine, he said.

Timeline: How the Ukraine-Russia crisis began

President Joe Biden said Russia would pay “a dear price” in economic sanctions if it attacks Ukraine but maintains that American troops won’t be used in combat . Some U.S. forces in Europe could be sent to support Poland, Lithuania, Latvia or Estonia , all members of the North Atlantic Treaty Organization. Some of the sanctions would cost Russian President Vladimir Putin personally .

Russia transferred troops and hardware into neighboring Belarus on Jan. 19 for a joint military exercise called "Allied Resolve 2022." The exercise is a two-part operation scheduled to end Feb. 20.

The move could put Russian troops less than 60 miles from the Ukrainian capital of Kyiv and force Ukraine to redirect some of its defenses to the Belarusian border.

In Ukraine, the United States removed families of embassy staff and nonessential personnel from diplomatic posts, the State Department said Jan. 23. The U.K. is bringing home half its diplomatic staff. U.S. citizens are urged to leave.

How big are Russian, Ukrainian armies?

Though Russia says it has no plans to invade, the West's evolving response illustrates a harder-line approach as Russia refuses to back down after gathering more than 127,000 troops around Ukraine .

The Western military alliance says it will support Ukraine while crafting a response that will incur “a heavy price for Russia.” It’s unlikely that NATO will send troops to Ukraine since it's not part of the alliance.

NATO said Jan. 24 that its members put forces on standby and deployed fighter jets and ships to Eastern Europe. It has about 4,000 troops in Poland and the Baltic nations of Estonia, Lithuania and Latvia. Those forces have tanks, air support and surveillance units.

NATO is not completely united on Ukraine.

Germany refused to send weapons to Ukraine. Croatia, a member of NATO since 2009, says it will withdraw its military from NATO if conflict develops between Russia and Ukraine.

What weapons are being sent to Ukraine?

"We will defend ourselves, but help us," Ukrainian Minister of Defense Oleksii Reznikov appealed to NATO in December .

"We need electronic warfare, electronic intelligence, anti-missile systems, cyber defense, we need to strengthen our fleet," Reznikov said. "We name all these needs publicly, we do not hide, and then the aggressor will not go further."

Ukrainians say they will resist a Russian invasion , polls show.

The United States increased aid to Ukraine. The White House said Jan. 19 it will give an additional $20 million in defensive military equipment. The package reportedly includes anti-armor missiles, ammunition and other items.

The United States is sending weapons to Ukraine in third-party transfers, in which NATO members provide U.S.-made weapons. Transfers include:

Javelin weapons are medium-range, shoulder- or vehicle-fired missiles used against armored vehicles, bunkers and caves , according to Raytheon.

The anti-tank missiles from Britain are shoulder-fired weapons capable of taking out a tank from a distance of about a half-mile.

Other U.S.-made weapons , not identified by the administration, will be sent by Estonia, Latvia, Lithuania and Britain, officials said.

How else is NATO aiding Ukraine?

NATO is bolstering its allies in the region:

The Pentagon kept the USS Harry S Truman carrier strike group , a group of six warships, in the Mediterranean Sea. The strike group had been scheduled to move on to the Middle East after a naval exercise.

Russia demands guarantees that Ukraine will never be permitted to join NATO or the European Union. It wants NATO expansion halted, which NATO rejected .

NATO and the EU say those choices belong to Ukraine. A majority of Ukrainians want to join both organizations, polls show.

Russia could plan to halt that movement by installing a regime in Ukraine, according to statements by the U.K. Foreign Office on Jan. 22. Officials said Russian intelligence agents contacted former Ukrainian politicians as part of an invasion plan.

Western officials say an invasion could range from a full-fledged attack, as most officials anticipate, to a “ minor incursion ,” as Biden said, and was criticized for, during a news conference Jan. 19.

Biden's choice of words highlighted a potential problem for the United States and allies. How should they respond to something less than a full invasion – the movement of a few units or a cyberattack?

The White House said that if “any assembled Russian units move across the Ukrainian border , that's an invasion,” which would be met with a “severe and coordinated economic response.”

Russia maintains an overwhelming arms advantage over Ukraine. If diplomacy fails and direct military action is ruled out, here is what the United States and its allies could do:

'Deterrence by punishment' is an option

Deterrence by punishment “threatens severe penalties, such as nuclear escalation or severe economic sanctions, if an attack occurs,” according to a RAND Corp. study and other sources .

It includes aiding an insurgency – in this case in-country Ukrainian resistance against Russian invaders.

The Obama administration used sanctions against Russia in March 2014 after it invaded Ukraine and annexed Crimea. They targeted small Russian banks and low-level military officials involved in the attack.

Most of those sanctions remain in effect. Though they damaged Russia economically , they did not force Russia to give up Crimea or stop supporting separatists in eastern Ukraine.

The Biden administration plans stronger sanctions that include restrictions on exports to Russia, prohibiting Russian banks from participating in global transactions and giving military assistance to Ukraine.

Biden said Tuesday he would consider directly sanctioning Putin if Russian forces invade. Possible sanctions would block all U.S. property transactions and interests in property held by the Russian president and other top military and government officials.

The most severe overall sanction is the foreign direct product rule , which would prohibit companies from exporting any electronic items, including microchips, made with U.S. equipment or designed by U.S. software, even if the items were made overseas.

The Trump administration used the rule against the Chinese company Huawei in May 2019 after labeling it a security threat. Company revenue fell nearly 30% in 2021.

Export restrictions would place Russia on a trade level with North Korea, Iran, Cuba and Syria. Restraints could preclude Russia from importing:

Financial restraints would include disconnecting Russia from SWIFT, the Society for Worldwide Interbank Financial Telecommunication, a global messaging system for banks to send and receive financial information.

Russia created a similar messaging system of its own called SPFS. That service is designed to ease financial sanctions on Russian banks.

Some US troops are already in Ukraine

About 100 troops from the Florida National Guard are in far western Ukraine as instructors at the Yavoriv Combat Training Center. They're part of the 53rd Infantry Brigade Combat Team , which is training Ukrainian troops to strengthen their defensive abilities.

The Guard members serve as advisers only. The training center is considered outside Russia's military reach.

The U.S. Army has rotated other National Guard units there as instructors with the goal of helping Ukrainian forces reach NATO standards.

This article originally appeared on USA TODAY: How US and its allies could respond to Russian invasion of Ukraine

Vladimir Putin is so popular in Russia that he has the “political space” to withdraw his forces from Ukraine, said Boris Johnson.The prime minister said the Russian president still has “massive backing” from his own people despite international outrage over the invasion.“The Russian public overwhelming back Putin,” Mr Johnson told Talk TV. “Therefore he has the political margin for manoeuvre from within Russia … Putin has far more political space to back down, to withdraw.”The PM added: “There could come a point when he could say to the Russian people, ‘The military-technical operation that we launched in Ukraine has...
POLITICS・29 DAYS AGO
Newsweek

"After Ukraine, if we're given the command, in six seconds we'll show you what we're capable of," Chechen leader Ramzan Kadyrov said.
POLITICS・23 HOURS AGO
Newsweek

The brigade said it hit the base of the Russian command staff and destroyed a military SUV marked "Z," killing several enemy soldiers in the process.
MILITARY・1 DAY AGO
Salon

On March 6, 2022, 14 days into Russia's war against Ukraine, a video was shared on Facebook showing seven-year-old Amelia Anisovych singing "Let it Go," the hit song from the Disney musical "Frozen," inside a crammed Kyiv bunker. A sign of beauty, resilience and hope, it was viewed more than eight million times within days of posting.
POLITICS・1 DAY AGO

In an interview with Russian TV, Sergei Lavrov said that Russia is essentially at war with NATO. This rhetoric has some worried that Russia may use nuclear weapons in Ukraine. Lt. Col. Dakota Wood weighed in on the likelihood of this happening.
POLITICS・29 DAYS AGO
Business Insider

From a first-person perspective, the videos show an anti-tank missile system being fired at Russia armored vehicles seen across a field.
MILITARY・29 DAYS AGO
US News and World Report

WASHINGTON (Reuters) - The United States on Tuesday offered a reward of up to $10 million for information on six people it described as Russian military intelligence officers who had conducted cyber attacks affecting critical U.S. infrastructure. The six officers work in a cyber-focused unit of Russia's Main Intelligence Directorate...
PUBLIC SAFETY・29 DAYS AGO
USA TODAY

Mike Pence saved American democracy once. Now, he's helped to do it again against Trump.

Mike Pence took a stand in Georgia that could help America avoid disaster. He's working against the resurrection of Donald Trump's political career.
POTUS・13 HOURS AGO

200 bodies found in bombed Mariupol building; Kissinger urges Ukraine to give up disputed territory to end war: May 24 recap

200 decomposing bodies were found in the basement of a bombed-out apartment building in battered Mariupol, authorities said.
POLITICS・2 DAYS AGO
POLITICO

Fact check: False claim about Biden, WHO and U.S. sovereignty

The Biden administration's proposed amendments to a treaty will not give the World Health Organization authority over health care or U.S. sovereignty.
POTUS・18 HOURS AGO
USA TODAY

'A charged moment for the world': Blinken says war in Ukraine will not distract US from China threat

Secretary of State Antony Blinken said China is testing American diplomacy like “never before,” as he laid out how the U.S. should respond.
FOREIGN POLICY・4 HOURS AGO

Thousands of secret files that were obtained from computer systems of two local police agencies in China are now public. Here's a closer look at what they contain.
PUBLIC SAFETY・2 DAYS AGO
USA TODAY

'Why are we willing to live with this carnage?'

A Texas city mourns after a gunman killed at least 21 people, two years have passed since George Floyd's death and more news to start your Wednesday.
UVALDE, TX・1 DAY AGO
USA TODAY

Chen Quanguo, a Communist party leader, has been a leader in campaign against the minority ethnic group. Hacked files reveal details of his approach.
CHINA・1 DAY AGO