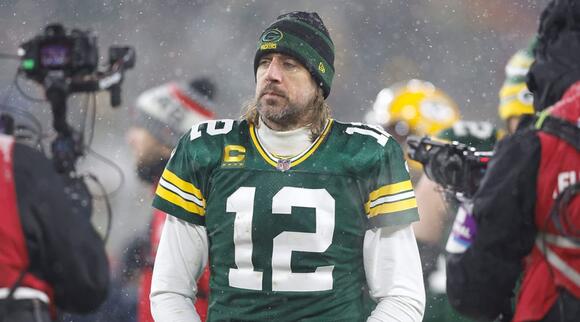 The Packers QB said fear and hatred is not going to end the pandemic, but rather "love, connection and actual conversation, debate and information sharing."

The uncertainty surrounding Green Bay quarterback Aaron Rodgers's future has been widely discussed since the Packers’ loss to the 49ers in the NFC divisional round on Saturday.

As the 10-time Pro Bowler contemplates what his next move will be, he's still keeping fans in the loop on what's on his mind outside of the field via weekly appearances on The Pat McAfee Show . On Tuesday, Rodgers said that he has "empathy" for those who are living in fear of COVID-19, despite his decision to not get vaccinated against the virus.

"I do have empathy for those individuals who have been dealing with this fear," Rodgers said. "Is the hatred based on the fact that I don't have that fear, that I took responsibility for my own health... that I don't fall in line with a narrative... possibly.

"But I don't believe hatred and fear and name calling is going to get us out of this pandemic. It's going to be love, connection and actual conversation, debate and information sharing... I realize that I've been divisive this season by my vaccination status and my willingness to talk about it. I take accountability for that and I never wanted to be a divisive, polarizing figure on this. I wanted to inspire people, encourage them to think for themselves, to take their health into their own hands."

Rodgers has been under heavy scrutiny for misrepresenting his vaccination status after he said he was "immunized" earlier this season, only for it to be revealed upon him testing positive that he was not vaccinated and had sought alternative methods to protect himself against the virus that were not cleared by the NFL or medical experts.

After the Packers lost this past weekend, Rodgers said he knew some people were rooting against him because of his controversial decisions regarding the pandemic.

"We knew this was coming down the pipe at some point. With the amount of guys who did get COVID throughout the year, I knew there was a possibility that I would have to make comments about my own personal status and possibly be in the fire from it all."

Despite the controversy surrounding Rodgers, he is the favorite to win this year's MVP award after doing so last season. That would be the fourth MVP of his career, putting him alone in second place all-time behind only Peyton Manning, who won five. Rodgers finished the 2021 regular season throwing for 4,115 yards, 37 touchdowns and four interceptions and led the Packers to the NFC's No. 1 seed before they were upset at home by the 49ers on Saturday.

He had nine sacks in Cleveland last season.
CLEVELAND, OH・1 HOUR AGO

John Ruiz believes the Alabama coach was way off base with his comments.
MIAMI, FL・1 DAY AGO
Sports Illustrated

A tit-for-tat exchange between the Seahawks and Vikings in 2006 led the league to outlaw the cost-spiking strategy that's recently been in the news for other reasons.
SEATTLE, WA・2 DAYS AGO
Sports Illustrated

Dallas has now been fined three separate times for breaking this rule.
DALLAS, TX・2 HOURS AGO

The Giants wideout is reportedly expected to be ready for training camp in July.
EAST RUTHERFORD, NJ・1 DAY AGO
Sports Illustrated

The journeyman QB revealed the Bucs captain snubbed him on more than one occasion.
NFL・2 DAYS AGO
Sports Illustrated

The sophomore already has sparked interest from 13 colleges.
NFL・2 DAYS AGO
Sports Illustrated

Greg Olsen keeping the seat warm for Tom Brady could lead to some wild scenarios.
NFL・2 DAYS AGO
Sports Illustrated

The former teammate of James addressed the rumors about the superstar’s impact in roster building.
CLEVELAND, OH・1 DAY AGO