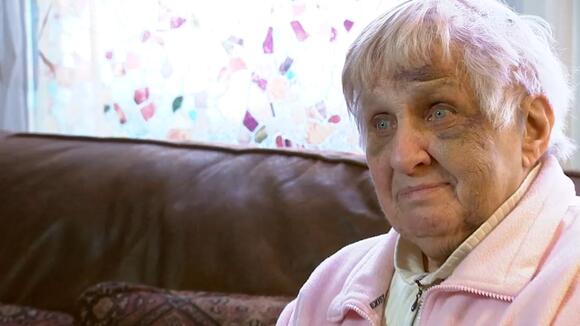 Police in New Jersey are investigating a disturbing crime in New Jersey in which a 90-year-old women was beaten in her home. It happened as she slept inside her house on East 27th Street in Paterson, after her vicious assailant broke in and attacked her in the middle of the night. "All of a sudden I was being beaten," Mary Veronelli said. Veronelli is now out of the hospital but is also out of her home. She says simply too afraid to return until the attacker is found and arrested. "When I was on the floor, he was punching me in the back," she said. "I'm still black and blue." ALSO READ | Mother, 2 young children reported missing in New Jersey

Toni Yates reports from Montville on the missing mother and two young boys.

The tough, independent woman barely survived the attack and was left a bloody mess. "Then I was on the floor," she said. "I couldn't get up because I was in a pool of blood by the dresser." The suspect broke into the house through a back door window, came into her room, and -- without saying a word -- he unleashed his anger on her. "He just pummeled me," she said. It happened in a section of Paterson that is not known for crime, but as scary as the incident was, Veronelli said she still wants to come home. "(I'm afraid to go home now) because he's still there," she said. No one has been arrested, but there are reports that cops are looking at possible suspect. "We are hyper focused on bringing her assailant to justice," Mayor Andre Sayegh said. ALSO READ | Fire at junkyard in Port Newark impacts NYC air quality

Meteorologist Jeff Smith says people with underlying conditions and even the average person might want to avoid outdoor activity due to the fire.

Veronelli's son Robert says this is the second incident involving his mom in less than two years, and he wants answers. "She has 21 staple marks in her head," he said. "Not from him hitting her, but police said there's puncture wounds, which means he didn't hit her. He probably had something in his hands. Mary has lived in Paterson most of her life, worked in the school district and still loves her home, friends and people in her neighborhood. ---------- * Get Eyewitness News Delivered * More New Jersey news * Send us a news tip * Download the abc7NY app for breaking news alerts * Follow us on YouTube

find the people who did this to mother grandmother auntie and take straight to the chair these people have know rite to exist. ps let the family pull the switch

I pray they catch the person who did that to her. I'm so glad she is ok. What an awful experience to go through.

this city need a wall around it! it is so disheartening to read this story. WHAT IS THE CITY GOVERNMENT'S PLAN??? Where is Speziale?

Authorities say 25-year-old Andrew Abdullah, who has about 20 prior arrests, was the man seen pacing around the subway car before shooting 48-year-old Daniel Enriquez in the chest, killing him.
NEW YORK CITY, NY・20 HOURS AGO
ABCNY

Animal Control recued 16 German shepherds and three Dobermans from what officials called the dilapidated basement of a once shining mansion in New Jersey Tuesday.
PATERSON, NJ・3 HOURS AGO
ABCNY

Police are investigating two fatal hit-and-run crashes on Long Island that happened not far from each other. Both happened in Suffolk County late Monday night.
SUFFOLK COUNTY, NY・9 HOURS AGO

A 19-year-old man is in the hospital after being attacked by another man with a hatchet.
MANHATTAN, NY・1 DAY AGO
ABCNY

The man was shot near the BP gas station at Communipaw Avenue and West Side Avenue just before midnight on Tuesday.
JERSEY CITY, NJ・5 HOURS AGO
ABCNY

Police released the first photos of the man suspected of fatally shooting a man in an unprovoked attack on a Manhattan-bound subway train.
MANHATTAN, NY・1 DAY AGO

Three females were killed in a crash near a catering hall on Long Island, as they left a Sweet 16 birthday party.
ACCIDENTS・2 DAYS AGO
ABCNY

The manhunt is on for a gunman who shot a man in an unprovoked attacked on a Manhattan-bound subway train.
MANHATTAN, NY・2 DAYS AGO
ABCNY

Surveillance video shows the robber walking around the BP gas station in Bensonhurst Sunday at 11:40 p.m.
BROOKLYN, NY・1 DAY AGO

Charges were filed against nearly three dozen alleged gang members who police say rapped about their crimes and beat a pigeon to death with a cane.
BRONX, NY・1 DAY AGO
ABCNY

A 20-year-old was shot in face and killed after meeting with alleged motorcycle sellers under the Deegan Expressway.
BRONX, NY・2 DAYS AGO
ABCNY

A man was stabbed to death by a suspect that broke into a second-floor apartment Sunday in Queens.
QUEENS, NY・2 DAYS AGO
ABCNY

A search was launched after 15-year-old Naz'ier Randolph, of Paterson, disappeared on Saturday afternoon while swimming with friends.
PATERSON, NJ・2 DAYS AGO
ABCNY

Nassau County is increasing waterway patrols ahead of the busy Memorial Day holiday weekend and urging boaters to refrain from drinking and driving.
NASSAU COUNTY, NY・2 HOURS AGO