Pelosi announces she is running for reelection 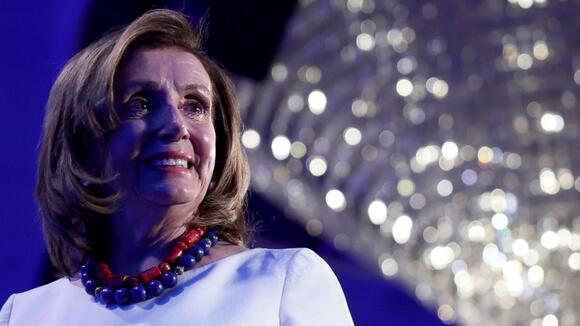 "While we have made progress much more needs to be done to improve people’s lives. This election is crucial: nothing less is at stake than our Democracy. But we don’t agonize-we organize. I am running for re-election to Congress to deliver For The People and defend Democracy. -NP," Pelosi said in a tweet.

As rumors continued to swirl over Pelosi's possible retirement, she is putting them to bed -- for now.

MORE: Pelosi announces she is running for reelection

She could always announce a resignation in the coming months, depending on which party keeps the House after the midterm elections -- or she could choose to stay if she wins her seat.

The reelection announcement does not mean she will necessarily be running for the speaker's gavel should Democrats keep the House.

And if they do retain the majority through the midterms and she stays in office, Democrats will likely be looking for fresh leadership.

Last January, the House narrowly reelected Pelosi as speaker with 216 votes, giving the California Democrat a fourth term as its leader.

Pelosi, who is the only woman to ever serve in the leadership role, has previously said she will not run for speaker after 2022.

You would think she would be too embarrassed to try to run again and to say democracy is at stake. well she is telling the truth there because her party is doing everything they can legal and illegally to destroy our country and she would dearly love to finish it off

Who's running against her ? Time for her to retire. The only people in California that care about her are those from Yeman and Russia. 3rd world head in that skull of hers.

Give it up you old bag, you have done enough damage to America that it will take years to repair. But Trump will be back to fix it.

EXCLUSIVE — Archbishop Wilton Gregory of the Archdiocese of Washington, D.C., has refused to comment publicly on whether he supports the barring of House Speaker Nancy Pelosi (D-CA) from receiving Holy Communion in light of her stance on abortion, with his office saying in a blunt and mistakenly sent email to the Washington Examiner that requests “will be ignored.”
WASHINGTON, DC・1 DAY AGO
WashingtonExaminer

When President Joe Biden named Kamala Harris as his running mate, he promised his former campaign rival would be one of the most influential voices in the White House.
PRESIDENTIAL ELECTION・29 DAYS AGO
Salon

"It's a shame all those people are dead, all because of a rigged election," Trump said in an interview with Piers Morgan.
PRESIDENTIAL ELECTION・29 DAYS AGO
Salon

House Republican Leader Kevin McCarthy (R-CA) (Joe Raedle/Getty Images) There was a flurry of headlines last week when news broke that House Minority Leader Kevin McCarthy (R-CA) said out loud that he thought former President Donald Trump should resign in the wake of the deadly Jan. 6 insurrection. The focus was on the fact that McCarthy lied about ever expressing that thought - until, of course, he was confronted with the audio recording of him saying exactly that.
CONGRESS & COURTS・28 DAYS AGO
The Atlantic

Last Monday, Malcolm Nance, an MSNBC talking head and former sailor in the United States Navy, showed up on the channel by satellite from Ukraine, dressed to kill. He wielded an assault rifle and wore full-camo military dress, including a ballistic helmet, and U.S. and Ukrainian flag patches. About a month ago, he said, he decided he was “done talking.” He then talked about how he had joined Ukraine’s international legion to help the country “fight [against Russia’s] war of extermination—an existential war.” Others have traced a similar journey. Andy Milburn, a journalist and ex-Marine who stopped writing and began training Ukrainians for combat, wrote an article about how he, too, was finished writing articles about Ukraine. “It just started to seem so frivolous,” he wrote, solemnly. “I didn’t want to be an observer.”
MILITARY・29 DAYS AGO
Newsweek

Kellyanne Conway, former campaign manager to Donald Trump, sat down with “The View” co-hosts on Tuesday to discuss her new memoir, her husband’s attacks on then-President Trump and a moment with the former president that she says left her heartbroken. When Trump won the 2016 presidential election,...
PRESIDENTIAL ELECTION・18 HOURS AGO