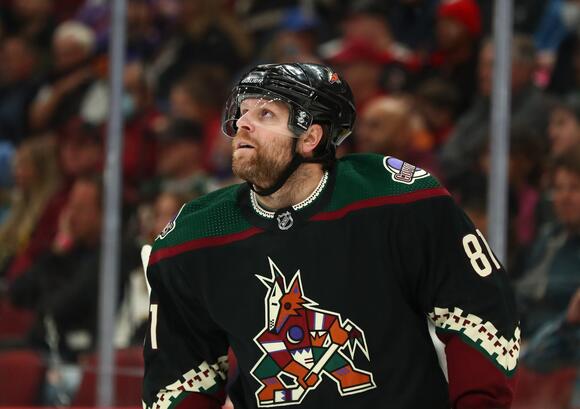 PITTSBURGH (93.7 The Fan) – Pens go for a sixth straight win tonight hosting the 10-26-4 Arizona Coyotes. It’s been two years since teams met with Arizona coming off a 7-3 loss at the Rangers and 4-0 loss at the Islanders preceding that.

The Pens have owned the series, as have most teams against the Coyotes.  Pittsburgh has won six straight against Arizona, points in nine straight and haven’t lost at home to Arizona since 2015.

If ever you were going to overlook someone, tonight could be it.  The Coyotes didn’t get a first win until November 6.  They have the worst record in the Western Conference, against which the Pens are 12-4 on the season.

“They’ve had turnover, new faces, new coach,” said veteran forward Brian Boyle.  “Now they are playing a lot better and this is the NHL.  If you look at their lineup and what they’ve accomplished in the league and their ability.  You have to respect that.”

“We plan to win games against everybody.  We don’t look at the opponent and let that affect our mindset going into it, at least we shouldn’t.”

“We understand every team in this league is a good hockey team,” said Pens head coach Mike Sullivan.  “I like to believe we have real strong leadership that understands these circumstances and we’ve been in them before.”

“We have a lot of respect for Arizona, I know it’s been a struggle for them this season.  Having said that, they have won four of their last 10.  They have very good players on their team, they are a proud group.  It’s our challenge to make sure we bring our best every night.”

“Definitely a team you can’t look past,” said forward Zach Aston-Reese.  “Every team in this league is good, whether they are in first or last place.  Every night is a battle, we approach it the same way we have.  We have to generate that emotion, I think that’s something we have been pretty good at the last couple of years.  Will see tonight.”

The last meeting in January 2020 was memorable, a 4-3 Pens shootout win as the teams combined to use 16 shooters.  The game-winner by the man who isn’t available tonight, Teddy Blueger.

With the loss of Blueger for potentially two months, here were the line combinations during the game day morning skate.

Tristan Jarry will start in goal.

The good news for Phil Kessel is he continues to be one of the healthiest players in NHL history, playing 940 consecutive games.  The bad is the lack of goal scoring.  Kessel has but five goals in 40 games this year, leading the Coyotes in assists.

The former Pens Stanley Cup champion did have four assists in a game at San Jose in late December.  The 34-year-old hasn’t scored since December 17 against Anaheim.  In 34 career games against the Pens, Kessel has 11 goals and 13 assists.

Was it the last game with Crosby, Malkin & Letang together

Sunday was the end of the season and likely the end of the Big 3 after 16 years together, hear what players are saying & what the future could be for 71 and 58
PITTSBURGH, PA・1 DAY AGO
93.7 The Fan

A phrase that’s been thrown around since the Penguins lost Game 7 to the New York Rangers on Sunday night is “end of an era.” Forward Evgeni Malkin and defenseman Kris Letang just played their last game in Pittsburgh under their current contracts.
PITTSBURGH, PA・1 DAY AGO
93.7 The Fan

For a 3rd straight game the Pens blew a lead and lost as you will hear postgame reaction from Mike Sullivan, Sidney Crosby, Tristan Jarry and Jake Guentzel
NEW YORK CITY, NY・1 DAY AGO
93.7 The Fan

Despite a report to the contrary, Sidney Crosby says he wasn’t cleared from his concussion in time for Game 6–hear what Crosby had to say in his last season interview
PITTSBURGH, PA・8 HOURS AGO

Malkin wants to stay, has more to give, doesn’t know future

Listen to what Evgeni Malkin said about his future in Pittsburgh, the future of his game and his desire to show he’s still an elite NHL player
PITTSBURGH, PA・7 HOURS AGO
ABC Action News WFTS

Local businesses and fans credit the Lightning, among other things, for Tampa's rapid growth.
TAMPA, FL・33 MINUTES AGO
Sportsnaut

There were several big moments in the Pens-Rangers series, several of the players involved in those moments commented for the 1st time on Tuesday
PITTSBURGH, PA・6 HOURS AGO

CHICAGO (AP) — The Orlando Magic won the NBA draft lottery Tuesday night and landed the No. 1 overall pick for the first time since they got Dwight Howard in 2004. It’s the fourth time lottery luck struck for the Magic, who won in back-to-back years in 1992 and 1993, taking Shaquille O’Neal and then […]
NEW ORLEANS, LA・37 MINUTES AGO
93.7 The Fan

What is Pitt getting in addition of transfer guard

Another new face for Pitt basketball, a look at the guard they got from Marquette, originally from Detroit. It’s part of the new-look Panthers roster for 2022-23
COLLEGE SPORTS・6 HOURS AGO