Baking soda vs. baking powder: When to use each ingredient to get light and airy baked goods 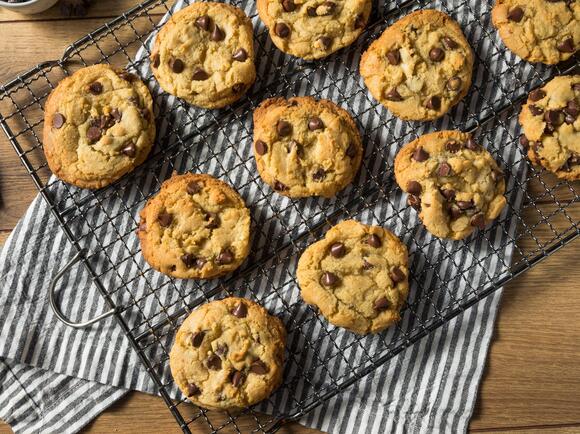 It's common to find baking soda, baking powder, or a mixture of the two on the ingredients list for a baking recipe. But what exactly are they? Baking soda and baking powder are chemical leavening agents. While they both play a role in making batters or doughs rise — as well as changing the texture of food — they are not one and the same.

"While both leaveners create a rise, they work differently to get there," says Lindsey Johnson, baker and owner of Lady in the Wild West .

Baking soda and baking powder are distinct ingredients, and each serves a specific purpose. Because of the way they differ in make-up, they cannot be used interchangeably.

What is baking soda?

Baking soda is pure sodium bicarbonate. According to Johnson, it's used in baked goods such as cookies, muffins, and quick breads. When baking soda is paired with an acidic ingredient such as brown sugar, cocoa, sour cream, or buttermilk, it reacts with the acid. That reaction creates tiny bubbles of gas, or carbon dioxide, which makes a batter or dough rise and spread. "Think of the perfect chocolate chip cookie," says Johnson, referring to the chewy texture. "That's baking soda."

If you're out of baking soda, baking powder can be substituted by multiplying the amount called for by three. However, Johnson advises only doing this in a pinch because it can cause the taste and texture of the end product to be too dense or salty.

Baking soda can be stored unopened for up to three years, but once the box is open, that shelf-life begins to dwindle. Because baking soda has the ability to absorb odors and moisture, an opened box stored in a cool, dry pantry should be replaced after six months.

When to use baking soda

What is baking powder?

Baking powder is made up of both sodium bicarbonate and a dry acid such as sodium aluminum sulfate or cream of tartar. It's used in baked goods such as cakes, biscuits, and pastries. According to Johnson, baking powder relies on the liquid in a mixture, such as water or milk. It reacts to the liquid first and then reacts again to heat. Both reactions produce tiny bubbles of gas, or carbon dioxide, causing the batter to rise and puff to create a light, airy texture.

Baking powder can be stored unopened for two years, but once the package is opened, that shelf-life is also reduced. Because baking powder reacts with liquid, any exposure to moisture over time can change how effective it is. Store opened baking powder in a cool, dry place for no more than one year.

When to use baking powder

Quick tip: You can make a substitute for baking powder at home by combining 1 teaspoon of baking soda with 2 teaspoons of cream of tartar .

Some recipes may call for baking soda or baking powder on their own, while others may require both ingredients to create the ideal balance for great texture.

I'm a chef. Everyone should know how to make this no-bake cake using store-bought cookies.

Every home cook should be able to make this easy dessert that uses premade cookies and bananas. It's easy to serve and doesn't require any baking.
RECIPES・1 DAY AGO
Insider

Gordon Ramsay revealed how to make the "perfect" plate of eggs on TikTok. Insider's food reporter put his tips to the test — and loved the result.
RECIPES・23 HOURS AGO
Insider

There are lots of beloved takes on the classic pasta sauce. I tested three recipes with different prep and cook times to see which is worth it.
RECIPES・21 HOURS AGO
SheKnows

Click here to read the full article. Khloé Kardashian’s perfectly curated kitchen pantry (read: grocery store) is a slice of organized, structured Heaven that puts even the best kitchen storage solutions to shame. And if you’ve ever caught a glimpse of her color-coordinated fridge (and her urge to keep everything super neat and tidy inside it), the immaculate state of her pantry really should come as no surprise. Luckily for us, we can recreate some of the organizational magic with Aldi’s new glass storage containers. View this post on Instagram A post shared by Aldi Connoisseur 🌈 (@aldi.is.my.jam) Aldi fan account,...
CELEBRITIES・26 DAYS AGO

I tried black coffee at 4 fast-food chains, and there's only one I would ever buy again

I tried plain hot coffee from Sonic, Wendy's, Burger King, and McDonald's to find out which drive-through restaurant has the best cup.
RESTAURANTS・2 DAYS AGO
Insider

Rodney Scott told Insider adding sauce to your dishes at a barbecue joint without tasting anything first is a mistake he sees a lot of diners make.
CHARLESTON, SC・1 DAY AGO
Insider

Restoring old leather furniture, shoes, and home goods can be done at home with these easy-to-use products, and now my old leather chair looks new.
LIFESTYLE・2 DAYS AGO
Insider

The trending "coastal grandma" aesthetic is all about creating a laid-back (but chic!) beachy vibe inspired by Nancy Meyers movies.
INTERIOR DESIGN・2 DAYS AGO