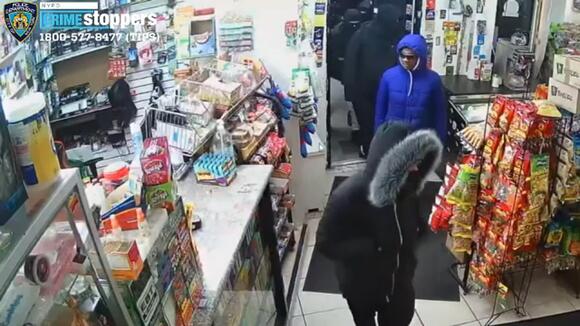 Police released video of a violent attack inside a bodega in the Bronx in hopes someone may recognize the group of suspects. The incident happened early Saturday morning around 3 a.m. inside a store on Grand Concourse. Police say five suspects walked in and showed firearms and knives. They allegedly assaulted multiple store employees, including Rafael Gonzalez. "I saw this guy coming up to me with a gun, he hit me in the face and told me to stay there," Gonzalez said. "They said hurry up, hurry up, that's all they were saying. And the other guy told me to stay down." They also attacked and stabbed a 37-year-old employee behind the counter several times in the neck, torso and arm. "He fought back, I don't know why, he fought back because he was trying to protect the money and everything," Gonzalez said. The clerk was taken to the hospital in critical condition. His mother said he was out of the hospital by Tuesday afternoon, but not up for talking. The attackers got away with cash, vape equipment and cellphones. Gonzalez finally mustered up the courage to tell the suspects to leave the store. "I was not scared, but I was nervous and I couldn't do anything," Gonzalez said. Anyone with information is asked to call the NYPD's Crime Stoppers Hotline at 1-800-577-TIPS (8477) or for Spanish, 1-888-57-PISTA (74782). RELATED | Bronx DA Darcel Clark to man who shot baby girl: 'You're not going to get away with it'

The pain is piercing to know that her 11-year-old daughter, Kyhara was another victim of gun violence.
BRONX, NY・6 HOURS AGO
ABCNY

Rachel Nugent, 14, was last seen leaving her residence located at 551 Old Dock Road in Kings Park at approximately 6:45 a.m. Investigators believe she may have taken a train to New York City and may have traveled out of state.
SUFFOLK COUNTY, NY・14 HOURS AGO
ABCNY

In the most recent attack, a 51-year-old thought her life was over, but the thieves took her jewelry -- $7,000-worth before letting her go.
QUEENS, NY・1 DAY AGO

Police in Long Branch, New Jersey imposed a 9 p.m. curfew after a crowd got out of hand at Pier Village.
LONG BRANCH, NJ・6 HOURS AGO
ABCNY

Video shows the man throwing traffic cones at the vendors cart and yelling at him.
NEW YORK CITY, NY・18 HOURS AGO
ABCNY

Two people were found dead in a burning car in the Bronx were both fatally shot, and a double murder investigation is now underway.
BRONX, NY・2 DAYS AGO

A puppy that was snatched from a pet store in New Jersey has been returned unharmed.
MIDDLETOWN, NJ・6 HOURS AGO
ABCNY

Authorities say it started as some sort of collision involving a jet ski.
MANHATTAN, NY・6 HOURS AGO

Graphic video shows three suspects attacking two men, lifting one up and slamming him onto the ground.
MANHATTAN, NY・3 DAYS AGO
ABCNY

The arrests were part of Operation Long Island Wave, and those arrested were wanted for offenses including homicide, attempted murder, narcotics, weapons offenses, robbery and assault.
LAW ENFORCEMENT・2 DAYS AGO
ABCNY

The BMW was southbound when the driver lost control and careened into the northbound lanes just after 11:45 p.m. Wednesday.
BRONX, NY・2 DAYS AGO
ABCNY

A man died after he collapsed at the finish line of the Brooklyn Half Marathon Saturday.
BROOKLYN, NY・11 HOURS AGO

The employees' scaffolding suddenly stopped moving and got stuck. It happened Friday just after 8 a.m. at 712 Fifth Avenue in Manhattan.
MANHATTAN, NY・1 DAY AGO
ABCNY

Fire ripped through the same buildings back on October 8, 2021. One firefighter sustained minor injuries battling this morning's inferno.
BRONX, NY・3 DAYS AGO
ABCNY

A community is rallying and demanding justice after an innocent 11-year-old girl was gunned down in the Bronx, struck by a stray bullet from a gunman on a scooter.
BRONX, NY・3 DAYS AGO
ABCNY

Authorities say a suspect in a stolen Honda CRV struck an occupied police vehicle that was pulled over on the side of the road before colliding with another vehicle and hitting several pedestrians.
PATERSON, NJ・2 DAYS AGO