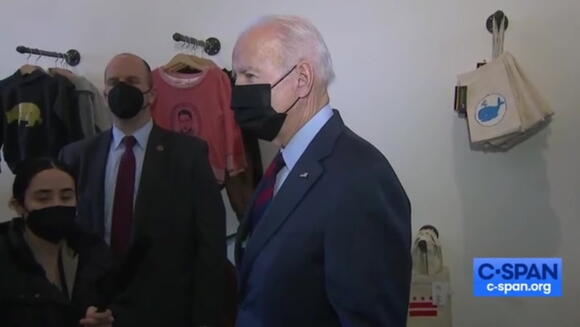 President Joe Biden assured reporters that US troops would not be going into Ukraine even as 8,500 American troops are placed on heightened alert.

“There is not going to be any American forces moving to Ukraine,” Mr Biden told reporters at a store in Washington .

Mr Biden made the remarks despite the fact that on Monday, the Pentagon announced that Defence Secretary Lloyd Austin placed 8,500 troops on “heightened preparedness”. The president said that the forces were on high alert and are a part of a Nato operation .

White House press secretary Jen Psaki said that the announcement was made to be a part of a Nato force.

“So all of these consultations that have been happening over the last several days with our European partners and Nato partners has been about that,” she said. “The decision about whether they would be deployed would be made in coordination with our Nato partners and allies.”

The tensions come as Russian President Vladimir Putin amasses troops on the border between Russia and Ukraine and now on the entire Belarusian border.

“And I made it clear to President Putin, we have a sacred obligation, Article V obligation to our Nato allies and if in fact, he continued to build up and/or wants to move, we would be reinforcing those troops and I’ve spoken with every one of our Nato allies,” the US president said. “What would lead to that is what President Putin does or doesn’t do.”

Mr Biden responded to a reporter’s question affirmatively when asked if he could see himself personally sanctioning Russian President Vladimir Putin.

“We have no intention of putting American forces or putting NATO forces in Ukraine but as I said, there are going to be serious economic consequences,” he said.

State Department spokesman Ned Price said there had not been evidence of de-escalation.

“We haven’t seen the de escalation that is necessary for diplomacy and dialogue to be successful,” he said. “We urge Russia to cease the abuse of of ‘extremism’ designations to target nonviolent organisations, to end its repression its repression of Mr Navalny and his supporters and honor its international obligations to respect and ensure human rights and fundamental freedoms,” he said. “The Russian people, like all people, have the right to speak freely, form peaceful associations to common ends, exercise religious freedom and and have their voices heard through free and fair elections.”

Mr Price said Russia’s surge into Belarus is a cause for deep concern.

Ms Psaki also responded to claims by Ukraine’s government that an invasion from Russia was not imminent.

On Monday evening, Mr Biden expressed optimism at the agreement among world leaders.

“I had a very, very, very good meeting. Total unanimity with all the European leaders,” he said. But Germany has refused to say it would provide weapons to Ukraine. German Chancellor Olaf Scholz said explicitly “We don’t provide any lethal weapons.”

“As our National Security Adviser and our Secretary of State have said, that unity doesn’t happen on its, own--it’s required a lot of work,” she said. “It also means that actions may not be identical, but we will be unified and they will be strong and severe.”

Ukraine video shows massive Russian explosions: 'What the most horrific war of the 21st century looks like'

Ukraine’s Ministry of Defense has posted a video Thursday showing the devastating effects of Russian rocket attacks during the war. The clip shows aerial views of a series of blasts rocking the Ukrainian countryside, sending shockwaves and plumes of smoke billowing into the sky. "This is what largest and...
MILITARY・1 DAY AGO
Newsweek

The Russian official read out an appeal to the president demanding the immediate withdrawal of troops from the territory of Ukraine.
POLITICS・14 HOURS AGO
Newsweek

A Russian mother told the BBC that her two sons were conscripted into the military and found out later they had been sent to Ukraine.
POLITICS・23 HOURS AGO

On March 6, 2022, 14 days into Russia's war against Ukraine, a video was shared on Facebook showing seven-year-old Amelia Anisovych singing "Let it Go," the hit song from the Disney musical "Frozen," inside a crammed Kyiv bunker. A sign of beauty, resilience and hope, it was viewed more than eight million times within days of posting.
POLITICS・2 DAYS AGO
HuffPost

On Thursday, the former president said he would have shunned his former campaign manager had he known that "she thought we lost the election."
PRESIDENTIAL ELECTION・1 DAY AGO
Daily Beast

Sen. Ted Cruz (R-TX) abruptly walked off from a British journalist’s questions about gun violence in America two days after an elementary school massacre in his state left 19 children and two adults dead. Cruz, who is due to appear at a National Rifle Association convention this weekend, became...
CONGRESS & COURTS・1 DAY AGO

US president Joe Biden mocked walking out of a meeting with Australia’s prime minister Anthony Albanese after the latter recalled a trip to the US in his younger days and a visit with the National Rifle Association (NRA) more than three decades ago.Mr Biden pretended to storm out just hours before a teen gunman murdered 19 children and two teachers in an elementary school in Texas’ Uvalde town, in one of the worst mass shootings witnessed by the US in years.During his discussion with the US president on the sidelines of the Quad summit on Tuesday, Mr Albanese narrated...
POLITICS・2 DAYS AGO
americanmilitarynews.com

Putin's Elite Soldiers Getting Wiped Out as Russia Makes Mistakes—U.K.

The British defense ministry said in its daily update of the Ukraine war that Russia's airborne forces have been used in the wrong way.
MILITARY・1 DAY AGO

'Civilization may not survive this': US billionaire George Soros says Russia may have started World War Three and the only way to save mankind is to defeat Putin

Billionaire financier George Soros said on Tuesday that Russia's invasion of Ukraine may have been the beginning of World War Three and the best way to preserve free civilisation was for the West to defeat President Vladimir Putin's forces. Soros, 91, a legendary hedge fund manager who earned fame by...
WORLD・3 DAYS AGO
The Independent

A lawyer for Hillary Clinton's 2016 presidential campaign repeatedly billed to the campaign “general political advice" and legal work related to a since-debunked secret back channel between Donald Trump and Russia, according to evidence shown to jurors Wednesday in the attorney's trial.Prosecutors presented the billing records as part of an effort to convince jurors that Michael Sussmann was acting on behalf of Clinton's campaign when he approached the FBI with computer data that he said showed a link between the Trump Organization, the former president's company, and Russia-based Alfa Bank. The FBI investigated but quickly determined no such link...
U.S. POLITICS・2 DAYS AGO
The Independent

US Congress delegation ‘most undiplomatic visit I’ve ever seen’ – Donaldson

A visit by a US delegation led by Congressman Richard Neal has been termed “the most undiplomatic to these shores” by the DUP leader.Sir Jeffrey Donaldson slated the language used as “unhelpful”, adding it “displays an alarming ignorance of the concerns of unionism”, with reference to Mr Neal’s comment about the dispute over the Northern Ireland Protocol being a “manufactured issue”.However, Sir Jeffrey said he heard a “more realistic approach” during his party’s meeting with the delegation at Stormont on Thursday.Ulster Unionist leader Doug Beattie said he feels the delegation “now understand the issues at hand”.“I think they get it...
CONGRESS & COURTS・1 DAY AGO
The Independent

Government ministers will no longer be expected automatically to resign or be sacked if they breach their code of conduct, under changes announced by Boris Johnson.An update to the code published today states that it is “disproportionate” to expect heads to roll for every breach of the code no matter how minor, and says ministers could instead be punished by “some form of public apology, remedial action or removal of ministerial salary for a period”.The chair of the House of Commons standards committee said the change took the UK into “banana republic territory”, while Labour accused the prime minister...
POLITICS・6 HOURS AGO

A former U.S. Army reservist described by prosecutors as a Nazi sympathizer was convicted Friday of storming the U.S. Capitol to obstruct Congress from certifying President Joe Biden’s 2020 electoral victory.Timothy Hale-Cusanelli, who worked a security contractor at a Navy base when he joined the pro-Trump mob on Jan. 6, was also convicted of disorderly conduct and other misdemeanors. Hale-Cussanelli took the stand in his defense and claimed he didn't know that Congress met at the Capitol building.“I know this sounds idiotic, but I’m from New Jersey,” Hale-Cusanelli said, according to WUSA-TV. “In all my studies, I didn’t know...
PROTESTS・4 HOURS AGO