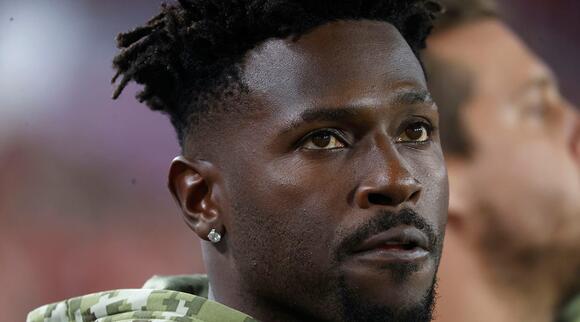 A short clip was released teasing the interview.

Antonio Brown and his lawyer, Sean Burstyn, are appearing on HBO‘s Real Sports with Bryant Gumbel on Tuesday. Before the full show, a short clip was released.

In the video, Brown doubled down on his claim that he was injected with Toradol, an anti-inflammatory drug, by the Buccaneers in order to numb the pain he was dealing with from an ankle injury against the Jets. Coach Bruce Arians previously said Brown never brought up pain from the injury during the game, but Brown disputes that notion.

Brown also refuted Arians‘s claim that Brown‘s exit in the middle of the regular season game against the Jets was after he complained about not getting touches at halftime .

“Tom Brady is my guy, he the reason I'm on Tampa Bay, so I know I'mma get the ball,” Brown said.

The Buccaneers and Brady have suggested Brown is dealing with issues regarding mental health on multiple occasions . Brown denied the idea in Tuesday’s clip, and Burstyn said the “spin” that Brown had dealt with a spontaneous mental episode was “resentful and hurtful.” Brown also added Tampa Bay made an offer to get him treatment for any mental health issues.

“These guys at Tampa Bay Bucs tried to make an agreement with me to get me $200,000 to go to the crazy house so these guys could look like they know what they're talking about,” Brown said.

Gumbel pushed Brown to clarify his remarks. Burstyn then jumped in to confirm the proposal from Buccaneers general manager Jason Licht.

“The offer was Antonio would basically sit on the sidelines, go on some list, and commit himself to some form of intensive mental health treatment,” Burstyn said. “We were specifically told, in writing by the general manager, twice, ‘Don't spin this any other way.’”

The former No. 1 pick has been retired from the NFL since 2017 after 13 seasons in the league.
ATLANTA, GA・4 HOURS AGO
Sports Illustrated

The two, along with Joe Buck, worked together at Fox for 10 years.
NFL・3 HOURS AGO
Sports Illustrated

The New York quarterback said the team’s decision was “out of his hands.”
NFL・2 HOURS AGO

The journeyman QB revealed the Bucs captain snubbed him on more than one occasion.
NFL・3 HOURS AGO
Sports Illustrated

The Alabama coach: "There’s nothing illegal about doing this. It’s the system. That’s the issue I have."
COLLEGE SPORTS・23 HOURS AGO
Sports Illustrated

The Lakers’ star doesn’t even hold back when playing against his son.
LOS ANGELES, CA・1 DAY AGO

The quarterback played in Indianapolis for one season.
INDIANAPOLIS, IN・2 DAYS AGO

A tit-for-tat exchange between the Seahawks and Vikings in 2006 led the league to outlaw the cost-spiking strategy that's recently been in the news for other reasons.
SEATTLE, WA・5 HOURS AGO
Sports Illustrated

Head coach and GM candidates will get face time with owners at the league’s spring owners meeting. Plus, James Bradberry’s fit with the Eagles, the Patriots’ lack of QB coaching and more.
NFL・1 DAY AGO
Sports Illustrated

Bets and analysis for Week 6 of the USFL, plus updated future odds.
BIRMINGHAM, AL・1 DAY AGO
Sports Illustrated

There is no offseason! Get the updated fantasy football rankings and auction values for the 2022 NFL season.
NFL・1 DAY AGO
Sports Illustrated

Greg Olsen keeping the seat warm for Tom Brady could lead to some wild scenarios.
NFL・4 HOURS AGO
NoleGameday

What a wild last couple of days in the college football world.
COLLEGE STATION, TX・36 MINUTES AGO
Sports Illustrated

Michael Pittman Jr. and Courtland Sutton will shine thanks to changes at quarterback.
NFL・2 DAYS AGO