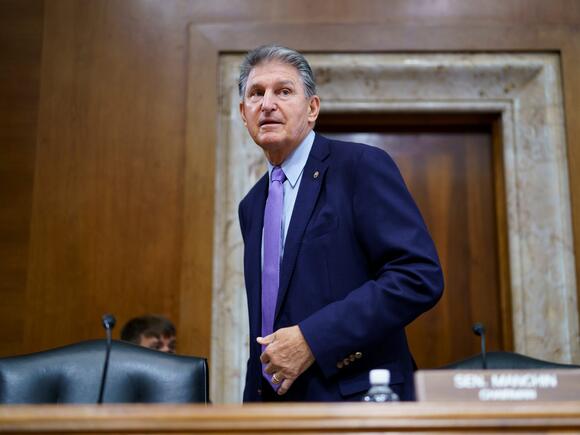 Sen. Joe Manchin snapped at Sen. Bernie Sanders on Tuesday after the former presidential candidate mused that Manchin could face a primary challenge after he voted against Democrats' efforts to weaken the Senate filibuster.

"Well, Senator Sanders is not a Democrat," Manchin told Newsy's Nathaniel Reed while back in West Virginia, pointing out that Sanders was a self-described democratic socialist. Manchin said Sanders' ideology was "not what I think the majority of Americans represent."

Both Manchin and Sanders are members of the Senate Democratic leadership. But they have an increasingly icy relationship because of their divergent views on how to move forward on President Joe Biden's economic agenda and voting rights.

"They have forced us to have five months of discussions that have gone absolutely nowhere. I think it's up to the people in their own states," Sanders told reporters last week when asked whether he'd support a primary challenge to Manchin, HuffPost reported .

Sanders, a Vermont independent who caucuses with Senate Democrats and ran twice for Democratic presidential nomination, supported an effort to make an exception to the Senate filibuster to pass voting-rights legislation. Manchin has said he supports the legislation itself, but he and Sen. Kyrsten Sinema of Arizona have remained staunchly opposed to any efforts to weaken the filibuster.

Manchin also dealt a significant setback to Biden's agenda in December when he declared that he couldn't support the president's climate and spending plan, known as "Build Back Better." Sanders has repeatedly pressed for Senate Majority Leader Chuck Schumer to hold a vote on the proposal in its current form even if it fails .

it's also funny that where Soros lives they have a wall and don't let many in that country Budapest! So why does he want too destroy America??

Sanders represents the welfare democrats and does not care if the country devolves into socialism and take us all down with them.

they should independent and side with the Republicans and watch the heads blow off the democrats!!!! be fun to watch, cause as of right now the democrats don't give a dam about Americans!!!

"Madison had some issues that came out," McDaniel said on Sunday. "He was a rising star in our party and we need to make sure we retain that seat."
CONGRESS & COURTS・2 DAYS AGO
Business Insider

"The filibuster is the only thing that prevents us from total insanity," he said. Congress hasn't passed a bill to address gun violence in years.
TEXAS STATE・13 HOURS AGO
Business Insider

Lockheed Martin's political action committee spent more than $250,000 in April donating to the campaigns of members of Congress and other political committees, new records show.
CONGRESS & COURTS・1 DAY AGO

If Democrats fail to resurrect Biden's agenda, millions could see their healthcare premiums sharply rise a week before the midterm elections.
U.S. POLITICS・1 DAY AGO
WashingtonExaminer

The poll also found that 44% of Republic voters want congressional candidates to focus on the 2020 presidential election.
PRESIDENTIAL ELECTION・1 DAY AGO
Business Insider

EXCLUSIVE — Archbishop Wilton Gregory of the Archdiocese of Washington, D.C., has refused to comment publicly on whether he supports the barring of House Speaker Nancy Pelosi (D-CA) from receiving Holy Communion in light of her stance on abortion, with his office saying in a blunt and mistakenly sent email to the Washington Examiner that requests “will be ignored.”
WASHINGTON, DC・1 DAY AGO
Fox News

"In retrospect, it's hard to understand David's campaign, and it's certainly not the campaign those of us who were for him expected," Gingrich told The New York Times of Perdue's race.
GEORGIA STATE・1 DAY AGO

"It would concern me," Gates told CBS News in an interview regarding former President Trump pursuing the White House again. "That's where I am."
PRESIDENTIAL ELECTION・2 DAYS AGO
Business Insider

"It's like the disinformation board on steroids. Another way to look at is the Patriot Act for American citizens," Sen. Josh Hawley said.
BUFFALO, NY・3 DAYS AGO
Business Insider

In an interview with the Daily Beast's Matt Lewis, one of the members of the conservative group that pulled out all the stops to make sure that Rep. Madison Cawthorn, R-N.C., lost his primary last Tuesday claimed that they are focusing their energy on also making Rep. Lauren Boebert, R-Colo., a one-term House member.
CONGRESS & COURTS・1 DAY AGO
Business Insider

Raffensperger, who Trump unsuccessfully pressured to "find" him 11,780 votes in the 2020 election, secured the nomination for another term.
GEORGIA STATE・10 HOURS AGO
Business Insider

Live election updates: Democratic runoff goes down to the wire in Texas while Trump-backed candidates have a bad night in Georgia

Georgia Gov. Brian Kemp and ex-Sen. David Perdue are vying for the GOP nomination, pitting a sitting governor against a Trump-backed challenger.
GEORGIA STATE・9 HOURS AGO