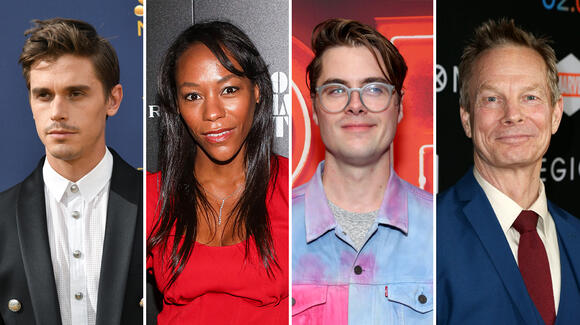 “Spoiler Alert,” a new feature led by Jim Parsons from Focus Features , has added four stars to its ensemble cast.

Having just wrapped principal photography in New York, the film is based on Michael Ausiello’s bestselling memoir “Spoiler Alert: The Hero Dies: A Memoir of Love, Loss, and Other Four-Letter Words.” It charts the emotionally turbulent 11-month journey of Ausiello’s former partner Kit, from his diagnosis with terminal cancer to his death. Interwoven in the narrative are glimpses of the roller-coaster ride that was the couple’s 14-year romance.

The actors join the previously announced Parsons, Ben Aldridge, and Sally Field — who reunites with Showalter following their 2015 quirky festival darling “Hello, My Name is Doris.”

A member of Netflix’s Emmy-winning Fab Five, Porowski is represented by CAA and Felker Toczek Suddleson Abramson. James, who appears in the Apple original “Severance” and on Amazon’s “Modern Love,” is represented by Liebman Entertainment.

Self, who broke out on the buzzy HBO Max dramedy “Search Party” and has appeared on “30 Rock” and in the Focus film “The High Note,”  is represented by Avalon Management and Schreck Rose Dapello Adams Berlin & Dunham. Irwin, whose credits also include “Interstellar,” is represented by Viking Entertainment.

Focus has domestic distribution rights, with a release date to be announced soon.

‘Stranger Things,’ ‘Westworld’ and More Shows to Look for This Summer

Click here to read the full article. Although summer used to be a time for TV fanatics to catch up on reading, that’s not the case these days, with new content constantly rolling out —— even during what used to be the TV off-season. Networks and streamers continue to mine existing IP — HBO Max will bring “Harley Quinn” and “Pretty Little Liars: Original Sin” in July, while Prime Video has the highly anticipated adaptation of “A League of Their Own” and Netflix will debut “The Sandman.” There’s also a slew of unscripted content, as per usual. Plus, expect buzzy, sure-to-be- trending...
TV SERIES・3 DAYS AGO
Variety

Click here to read the full article. Last week, “The Equalizer” star and executive producer Queen Latifah announced that the hit CBS series had been picked up for a third and fourth season. The show, in which Latifah plays vigilante Robyn McCall, is currently the network’s No. 2 primetime series, behind only stalwart show “NCIS,” so the multi-season commitment is logical. But success is never a given, at least not in Latifah’s eyes, who told Variety she’s “never satisfied” with the status quo. “I’ve been fortunate enough to have a film career where we were always coming up with new things. We’re...
TV & VIDEOS・3 DAYS AGO
Variety

Click here to read the full article. Reba McEntire is boarding “Big Sky” Season 3 at ABC in a series regular role. The news comes just days after the third season renewal announcement for the drama series, at which time it was also announced that both Jensen Ackles and Jamie Lynn-Sigler are also going to appear as series regulars in the new season. McEntire will play Sunny Brick, described as the mercurial matriarch of the Brick Family, a successful backcountry outfitter with a secret history of missing customers. McEntire is an incredibly accomplished musician, winning numerous top industry awards with 35 chart-topping singles...
TV SERIES・2 HOURS AGO
Variety

Click here to read the full article. Spoiler Alert: Do not read if you haven’t watched “all the sauces,” the fourth episode of Season 3 of “Barry,” streaming now on HBO Max. The first two seasons of Alec Berg and Bill Hader’s “Barry” followed the title character (played by Hader) as he barely maintained a double life between his hitman career and his newfound pursuit of acting. The character was able to keep these two worlds separate less because of any actions on his part than because of the self-absorption of the people he surrounded himself with — chief among them...
TV SERIES・12 HOURS AGO

Click here to read the full article. Ariana DeBose and Jennifer Jason Leigh have joined Chris Pine’s directorial debut, “Poolman.” Fully financed by Stuart Ford’s AGC Studios, the actors join an existing cast of Annette Bening and Danny DeVito. Pine also stars in the movie, which is billed as a moving tribute to Los Angeles. Plot details for the pic are so far sparse, but “Poolman” is crafted as a nod to famous LA noirs like “Chinatown,” “The Long Goodbye,” “The Big Lebowski” and “La La Land.” DeBose is fresh off her awards season sweep, which included Oscar, BAFTA and SAG awards for...
MOVIES・2 HOURS AGO
Hello Magazine

Robin Roberts got emotional as she opened up about her relationship with partner Amber Laign, especially in the midst of a challenging health battle. The Good Morning America star made an appearance on The Ellen DeGeneres Show to promote her new book, Brighter By the Day. VIDEO: Robin Roberts enjoys...
CELEBRITIES・20 DAYS AGO
The Independent

Laughter erupted in courtroom after Johnny Depp said he doesn’t watch his own movies and couldn’t recall the question he was asked. “I don’t watch them. I feel better not watching them. What was the question again?” Mr Depp said to laughter from the room. Johnny Depp trial – latest updates“Order in the court, or I will have you removed,” Judge Azcarate said. “Understood? Thank you.”The defamation trial between Mr Depp and Amber Heard began on Monday 11 April in Fairfax, Virginia following Mr Depp’s lawsuit against his ex-wife in March 2019. Mr Depp is arguing that she defamed him...
CELEBRITIES・20 DAYS AGO
Hello Magazine

The Today Show stars, including Hoda Kotb, Savannah Guthrie, and Craig Melvin, are reeling from the death of a beloved fellow Today host, one whose hiring onto the show made history at NBC studios. The co-hosts took a moment out of Monday morning's show to honor the legacy of Jim...
CELEBRITIES・21 DAYS AGO

Hoda Kotb took to social media to show her support for her co-star and close friend Jenna Bush Hager as she embarked on a brand new adventure. The Today host shared a snapshot of her co-host's book tour schedule, which took her around the country to talk about her latest release with sister Barbara P. Bush.
CELEBRITIES・21 DAYS AGO
Popculture

Netflix has canceled another one of its major shows, with this one getting the ax after only two seasons. Variety reports that hit sci-fi drama Raising Dion has been dropped by the streamer, following its recent season debut. The news seems to have been revealed by series star Sammi Haney, who shared the news with fans on Instagram. "Sad to say that Raising Dion is CANCELED [sic] Thank you for all of the amazing support we got from all of our wonderful fans!" Haney wrote, in part. "Season 2 was a success, equal to Season 1, even if just looking at how many people watched all of it and wanted a season 3!"
TV SERIES・19 DAYS AGO
The Independent

A woman has revealed several “red flags” that she found in the apartment of the man she’s dating, which included two books about pregnancy and a woman’s ring.In a recent video shared to TikTok, Devin, @discoveringdevin, filmed herself sitting on a bed and putting her thumb down, as the text reads: “Red flags in his apartment.”She then began by showing four Apple MacBooks, all placed on top of each other, on a desk. “Four laptops…what are you hiding?” Devin wrote in the text over the clip.Next, she documented what appeared to be a “girl’s ring” on a white shelf....
RELATIONSHIP ADVICE・20 DAYS AGO
Hello Magazine

Kate Hudson has realized one of her dreams and has taken to Instagram to share the incredible news with her 15 million followers. Sharing two pictures of her looking casual in a pair of baggy dip-dyed trousers and a white tank top, and singing into a microphone, the actress announced a surprising career change.
CELEBRITIES・20 DAYS AGO

Flo Milli is setting some boundaries. The Alabama native is known for hits like "In The Party," "May I," and "Not Friendly," and while she loves to see fans in the audience having a good time and turning up at her shows, she's not impressed with watching them snort lines from up on stage.
CELEBRITIES・21 DAYS AGO
The US Sun

GENERAL Hospital revealed a major character change is coming to the show this week as one of its stars battles health issues. There are often comings and goings happenings on soaps, and the latest cast switch-up involves longtime cast member Nancy Lee Grahn. Nancy, who turns 66 on Thursday, has...
CELEBRITIES・21 DAYS AGO
Outsider.com

Once again, Disney (DIS) - Get Walt Disney Company Report is finding itself embroiled in a political quagmire owing to its support of the LGBTQ community, after Florida Gov. Ron DeSantis punished Disney for denouncing his “Don’t Say Gay Bill,” by seeking to revoke Disney World’s designation as a special tax district (which as we pointed out, is ultimately a meaningless gesture).
FLORIDA STATE・19 DAYS AGO
Popculture

Spring is always a big time for engagements and weddings, and two beloved internet personalities are the latest to update their relationship status. On April 18, Rachel "Seltzer" Quirico revealed she and longtime boyfriend Trevor "TorcH" Housten were tying the knot after 17 years together. Both of them are beloved figures in the esports world, with Seltzer notably starring in the Syfy reality show WCG Ultimate Gamer. She's also hosted numerous esports tournaments and events for TV/streaming outlets; she also made a recent appearance on G4 TV's Boosted.
RELATIONSHIP ADVICE・20 DAYS AGO
Hello Magazine

Gwyneth Paltrow is a doting mom to two teenage children, Apple and Moses, who she shares with ex-husband Chris Martin. The family are notoriously private, but over the weekend the award-winning actress gave a rare insight into their upcoming plans - and how they are changing things up this year for Mother's Day.
FAMILY RELATIONSHIPS・20 DAYS AGO
hotnewhiphop.com

Kim Kardashian's ex-husband, Damon Thomas, continues to "wish her the best," despite any false narratives about their past relationship. The 51-year-old sat down with DJ Vlad, looking back at his marriage with now-billionaire businesswoman Kim Kardashian in the early 2000s. He believes he's played a "part in their journey," however, he doesn't want to be known as "Kim Kardashian's husband" and wants to "get in control of [his] narrative," as many people fail to recognize he has won Grammys and even made it to the Oscars.
RELATIONSHIPS・20 DAYS AGO
Newsweek

While Pratt has never publicly expressed his views on sexuality, his links to a church that has been accused of supporting conversion therapy and being anti-LGBTQ have made him a target for online criticism.
MOVIES・21 DAYS AGO