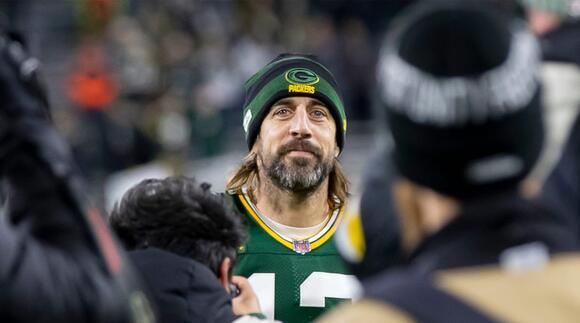 Green Bay‘s loss to the 49ers in the divisional round could mark the last time that Aaron Rodgers plays quarterback for the franchise, or in the NFL at all. Amid plenty of uncertainty about what the future holds, Rodgers appeared on The Pat McAfee Show on Tuesday to share insight into whether he'll return to Green Bay, play elsewhere or potentially retire after 2021.

Rodgers discussed Tuesday how he and general manager Brian Gutekunst have worked on their relationship after an offseason standoff in which Rodgers held out after seeking a trade. On multiple occasions during Tuesday's interview, Rodgers stressed he plans to make a decision with the needs of the franchise and some of his teammates in mind.

“I think some of the factors are the direction of the team and the organization, and how I feel like I fit in in the future,” Rodgers said. “Mentally, do I still have the passion, the competitiveness, the desire to keep playing? I think it’s a feeling, and you just kind of know when the offseason has started.

“When you’re a hyper-competitive individual, you also dream or think about what the fairy tale ending is. It doesn’t mean Super Bowl necessarily, but that’s a pretty damn good fairy tale.”

Rodgers‘s handling of retirement speculation is at odds with what we saw during Green Bay’s last quarterback change, when Brett Favre went back-and-forth on retiring for years, eventually playing for the Jets and Vikings before ultimately walking away from the game.

“One thing I would not do is retire and then come back a year later,“ Rodgers said Tuesday. “I don’t have any desire to do that. That makes no sense. I feel like I’m at the place with the Packers, you know in a really good place, especially with Brian [Gutekunst], and the way our friendship and trust has grown, where it would be a simple conversation, and whatever comes out of that conversation is moving forward.”

While Rodgers spent plenty of time praising the Packers during Tuesday‘s interview, he also confirmed that “all options” remain on the table. Rodgers said he wouldn't rule out playing elsewhere, though he didn't go into much detail about what that would look like.

“Everything is definitely on the table,” Rodgers said. “There are things that seem more plausible or more likely, which I won’t necessarily get into, but the most important thing is first the commitment to playing, and to going through the offseason and training and all that stuff is the first.”

The future Hall-of-Fame quarterback says he feels “no fear” of retirement, adding he's excited about what lies ahead after football.

While Rodgers isn't ready to make a call on his future quite yet, he shed some light on how he sees the process playing out, and again acknowledged that he expects a decision to come “sooner rather than later,” before free agency in March .

The impending free agency of wide receiver Davante Adams could play a factor in Rodgers‘s plans. Green Bay may have to get creative to hold onto a championship caliber roster, and Rodgers made it clear after Saturday's loss that he doesn't “want to be part of a rebuild” if he plays next year. Green Bay is currently projected to be about $40 million over the cap for 2022 .

Rodgers, a first-team All-Pro selection in 2021, is favored to win his fourth MVP award and second in a row.

He played for both the Dolphins and Texans in 2021.
INDIANAPOLIS, IN・2 DAYS AGO
Sports Illustrated

The quarterback played in Indianapolis for one season.
INDIANAPOLIS, IN・1 DAY AGO

The Bengals quarterback expected the Buccaneers quarterback to play all along.
TAMPA, FL・1 DAY AGO
Sports Illustrated

Both teams will square off on Sept. 3 on ESPN’s ‘College GameDay.’
OHIO STATE・1 DAY AGO
Sports Illustrated

The 38-year-old will call games with the network’s No. 2 announcing team beginning this fall after a pursuit by Fox for his services.
NFL・1 DAY AGO
Sports Illustrated

Al Michaels, Jim Nantz, Joe Buck talk about how Tom Brady will do as an analyst
NFL・1 DAY AGO
Sports Illustrated

Head coach and GM candidates will get face time with owners at the league’s spring owners meeting. Plus, James Bradberry’s fit with the Eagles, the Patriots’ lack of QB coaching and more.
NFL・3 HOURS AGO

Like Denver’s wide receivers, Albert Okwuegbunam will benefit from having Russell Wilson under center.
DENVER, CO・3 HOURS AGO
Sports Illustrated

All 43 games will be aired and distributed across ABC, ESPN and FX.
FOOTBALL・1 DAY AGO
Sports Illustrated

There is no offseason! Get the updated fantasy football rankings and auction values for the 2022 NFL season.
NFL・8 HOURS AGO
Sports Illustrated

The free agent hasn’t played since Week 3 of the 2020 season.
CHICAGO, IL・2 DAYS AGO
Sports Illustrated

He called Saban a narcissist and said his comments were “despicable.”
COLLEGE STATION, TX・4 HOURS AGO