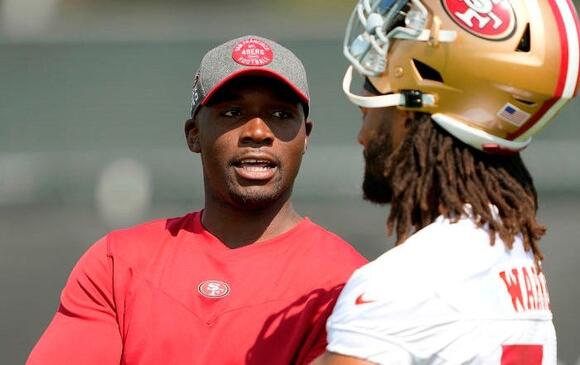 Both of the 49ers coordinators – DeMeco Ryans and Mike McDaniel – have conducted interviews this postseason for possible head-coaching gigs. With every passing week, it seems the stock of San Francisco’s first-year defensive coordinator, Ryans, is rising. In Saturday’s 13-10 win over the Green Bay Packers, the 49ers stifled Aaron Rodgers in the snow at Lambeau.

Personnel shuffling around the league continued Tuesday and it could have an impact on Ryans’ future with the 49ers. Former San Francisco exec and current Cleveland Browns VP of football operations Kwesi Adofo-Mensah has emerged a front-runner for the Minnesota Vikings general manager job, after the Chicago Bears’ reported hiring of Ryan Poles as GM .

Reporters like NFL Media’s Albert Breer and ESPN’s Nick Wagoner have already connected Adofo-Mensah with Ryans as a possible GM-coach pairing in Minnesota.

The 37-year-old Ryans has shined in his single season since succeeding Robert Saleh, who went 4-13 and finished last place in the AFC East with the New York Jets. Despite dealing with a host of injuries in the secondary, the 49ers finished top 10 in scoring (21.5 points per game, 9th), passing (206.5 yards per game, sixth) and rushing (103.5 yards per game, seventh).

Since moving Arik Armstead to the interior of the defensive line midway through the season, the 49ers defense has flourished. Armstead and Bosa have anchored the defensive line that has produced five sacks in three straight contests, all epic road wins by the 49ers. Ryans usually rushes four but dialed up a key blitz to help seal the Wild Card win in Dallas.

Ryans and Adofo-Menash spent three seasons together. Ryans joined the 49ers as a quality control coach in 2017 before being promoted to inside linebackers coach in 2018 for a three-year stint.

Ryans was the NFL’s 2006 Defensive Rookie of the Year and made two Pro Bowls with the Houston Texans during a six-year stint, before spending four more seasons with the Philadelphia Eagles and retiring in 2015.

He is regarded as a rising star who is destined for a head-coaching gig this offseason. Ryans will get another opportunity to add to his resume in Sunday's NFC Championship against the Rams.

Here’s a full list of the current NFL head-coaching vacancies:

95.7 The Game host Joe Shasky said the Warriors 110-96 win over the Memphis Grizzlies in Game 6 of the Western Conference semifinals was an “instant classic.”
SAN FRANCISCO, CA・21 HOURS AGO
95.7 The Game

Warriors coach Steve Kerr joined 95.7 The Game’s “Damon & Ratto” Monday to discuss how they plan to defend Luka Doncic and the Mavericks in the Western Conference Finals.
SAN FRANCISCO, CA・17 HOURS AGO