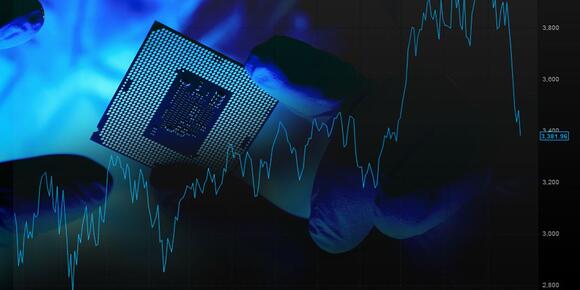 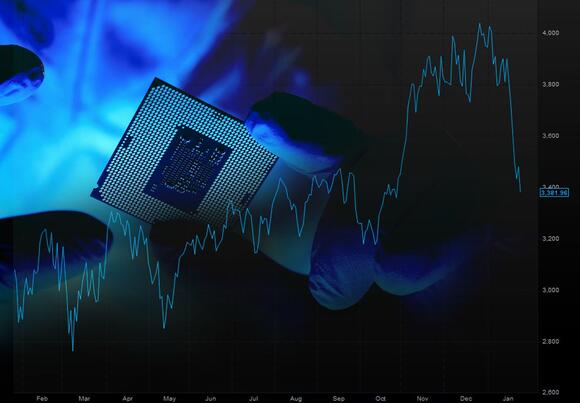 Semiconductors stocks fell further with the broader market selloff Tuesday, and have been skating dangerously close to bear-market territory this week as U.S. chip makers are set to begin reporting holiday-season earnings.

The PHLX Semiconductor Index (SOX) was down as much as 4% to an intraday low of 3335.70 Tuesday, ahead of the first big semiconductor earnings report of the season after the bell. That low marks a 17.4% drop from the index’s 4039.51 closing high on Dec. 27; on Monday, before the broader market staged an epic rebound from a big selloff, the chip index was as much as 19.4% off that high.

In one hopeful sign, Texas Instruments Inc. (TXN) on Tuesday following the close of markets, beat its own and Wall Street’s expectations and forecast a strong outlook. Shares were up more than 5% after hours.

Chip stocks have already suffered a correction, which signifies a 10% drop from recent highs, while a bear market is defined as a 20% drop from those highs. For the chip sector to slip into a bear market, the SOX index would have to drop below 3231.61.

Earnings preview: Chips may be sold out for 2022 thanks to shortage, but investors are worried about the end of the party

With the world still struggling to emerge from a chip shortage sparked by the COVID-19 pandemic , the U.S. Commerce Department reported Tuesday that inventories at manufacturers who use semiconductors are very low and could result in factory shutdowns .

In the meantime, the biggest drags on the sector are its largest names, all of which are firmly in bear territory. Intel Corp. (INTC) which is scheduled to report on Wednesday, is 25% off its April 9 closing of $68.26.

'What the wise man does in the beginning, the fool does in the end,' says Howard Marks, a pioneer of distressed debt investing and co-founder of Oaktree Capital Group.
MARKETS・9 HOURS AGO
MarketWatch

The Russian Defense Ministry is promising to open a safe corridor to allow foreign ships to leave Black Sea ports. A separate corridor will be open to allow ships to leave Mariupol by sailing from the port on the Sea of Azov port to the Black Sea. Mikhail Mizintsev, who...
INDUSTRY・23 HOURS AGO