Jon Rahm not prepared to apologise for furious on-course outburst World number one Jon Rahm stopped short of an apology as he expanded on his furious reaction to the conditions during last week’s PGA Tour event.

Rahm was overheard complaining furiously about the relatively easy test posed by the three courses used for The American Express, where his total of 14 under par was only good enough for a tie for 14th.

“Piece of s*** f****** set-up. Putting-contest week,” the fiery Spaniard could be heard saying in a video taken by a spectator as he walked off a green during the third round at PGA West.

Speaking about the video clip of the incident in a press conference ahead of the Farmers Insurance Open, Rahm said: “I mean, the video’s pretty self explanatory.

Asked if he regretted the language he used, Rahm added: “I mean, if I knew somebody was recording, I wouldn’t say it the way I did, but I was just thinking out loud and letting some frustration out because that’s what I felt, right?

“No matter where you hit it, you’re going to be able to hit it on the green and it becomes a putting contest, who can make the putts. That’s about it, there’s no premium for anything else.

“I can tell you right now with the way I struck the ball last week and the way I putted, if it was in, let’s say, major championship conditions, I probably wouldn’t have made the cut let alone finished 14th, or I shouldn’t have, I believe.

“Maybe, maybe not. But I just think it was a bit too easy for the best players in the world. That’s just my opinion.”

Fortunately for Rahm, who could be overtaken in the world rankings if Collin Morikawa wins on the DP World Tour in Dubai, the Farmers Insurance Open is staged at Torrey Pines where he won his first PGA Tour title in 2017 and a maiden major title in last year’s US Open. 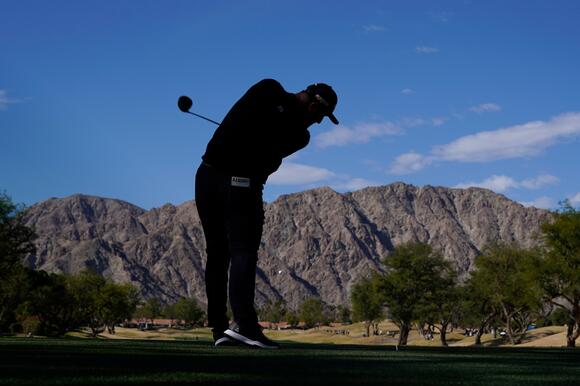 Former Open champion Francesco Molinari who has fallen from a career-high fifth in the world rankings to 181st, will look to build on his performance in The American Express where he briefly held a share of the lead late in the final round before finishing in a tie for sixth.

The tournament runs from Wednesday to Saturday to avoid a clash with the final round of NFL play-off games on Sunday.

Unbecoming of even a POS golfer, never mind a world rated #1 golfer. This junker idiot shines a bad light on even the most spoiled brat snot nose. Go sit on it Mr Rahm! So how’s everybody else’s day been; dandy, I hope. 😁 ⛳️🏌️

You obviously have to watch your mouth now days. Everybody has a camera and is looking for a chance to go viral. If you think his language is a rarity in golf at any level, 🙄

That's how to start a major, Rory! McIlroy reels off four straight birdies to kick off his US PGA Championship bid in style - as he looks to finally end his first round curse in pursuit of his fifth major title

He has been renowned for starting badly in major tournaments in recent years but Rory McIlroy surged into an early lead at the US PGA Championship at Southern Hills on Thursday, blasting four birdies in his opening six holes. Starting on the 10th, the Northern Irishman reeled off four straight...
GOLF・12 MINUTES AGO
The Independent

The PGA Championship begins on 19 May and Scottie Scheffler is the slight favourite after his stunning victory at The Masters in April. The world No 1 described the ecstasy of winning at Augusta “fleeting” and is determined to add to his major haul after a spectacular start to the year that’s already seen him win four events. Jon Rahm, Rory McIlroy, Justin Thomas and Jordan Spieth are all among the favourites and in great form heading into Southern Hills. LIVE BLOG: Follow live coverage of the PGA ChampionshipTiger Woods will continue his competitive return at the venue where he won...
GOLF・4 HOURS AGO
The Independent

Follow all the action as the PGA Championship gets underway at Southern Hills in Oklahoma this afternoon. The build-up to the tournament has been dominated by talk of players defecting to a rival Saudi-backed series and the absence of defending champion Phil Mickelson. That speculation will be forced into the background over the next four days though as the world’s best players vie for glory in the year’s second major. Scottie Scheffler enters the week as a slight favourite owing to his spectacular start to the season, with four victories including his maiden major title at Augusta in April....
GOLF・1 HOUR AGO