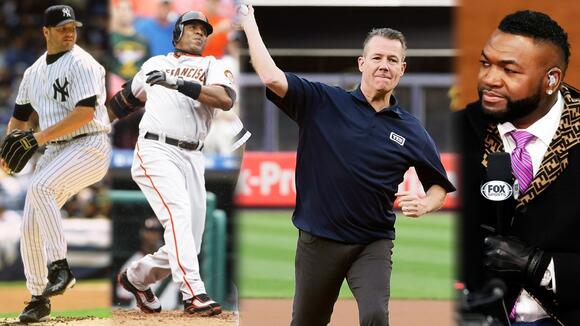 BOSTON (CBS) — It wouldn’t be Hall of Fame season if a member of the baseball media wasn’t twisting himself into a pretzel for all the world to see.

Curry revealed his ballot on Tuesday, which is the day that the Baseball Hall of Fame will announce which players — if any — will earn enshrinement this year. Curry used eight of his allowable 10 votes this year, and for the first time in their 10 years of eligibility, Barry Bonds and Roger Clemens received his vote.

The reason Curry hadn’t voted for Bonds and Clemens for the past nine years? Suspicions about PED use.

The reason Curry omitted first-year candidate David Ortiz from his ballot? Suspicions about PED use.

“I didn’t need to be reminded of how remarkable Bonds and Clemens were, but, in my conversations with the men who shared fields and clubhouses with them, I was repeatedly reminded of their elevated status in the game. Eventually, those passionate discussions and the fact that it was their final year on the ballot nudged me into a place I never expected to be: a Bonds and Clemens Hall of Fame voter,” Curry explained on the YES Network website .

Curry said he was able to reconcile with Bonds’ and Clemens’ suspected PED usage by noting that they’ll have a scarlet letter of sorts, even if they are enshrined in Cooperstown.

“In its own way,” Curry wrote, “that’s a punishment for two of the greatest players ever. That’s a fair characterization, one I agree with, and that helped lead me to voting for them. Before this ballot, neither Bonds or Clemens had received more than 62 percent of the vote. They will need a significant boost to reach the required 75 percent to enter the Hall.”

Curry didn’t rule out voting for Ortiz in the future, but determined that this year was about “grappling” with casting his vote for Bonds and Clemens.

“There are other players on the ballot who have been linked to performance enhancers like Gary Sheffield and David Ortiz and players who have been suspended over PEDs like Alex Rodriguez and Manny Ramirez, but I didn’t vote for any of them this time,” Curry wrote. “Now that I have voted for the two players who became the poster boys for the Steroid Era, I will reassess those other candidates next year. This year was about grappling with the dilemma of Bonds and Clemens. I didn’t vote for Sammy Sosa, who is also in his final year on the ballot.”

(Curry tweeted out his ballot, but only allowed those he follows to reply to him — an indication that he wasn’t eager to hear from those who had questions about his methodology.)

Omissions like Curry’s ( and Dan Shaughnessy’s ) could hurt Ortiz, who’s hoping to become a first-ballot Hall of Famer. The Baseball Hall of Fame Tracker website had Ortiz with 83.7 percent of the public ballots, as of early Tuesday afternoon. Only 50 percent of the ballots have been made public, though, and numbers typically dip from the public tallies to the final count. There’s certainly a strong chance that Ortiz’s voting total drops below 75 percent when the Hall of Fame makes the final announcement on Tuesday evening.

If it comes down to one vote making the difference, this twisted explanation for Bonds and Clemens but against Ortiz is certain to be revisited.

UPDATE: Ortiz made the Hall of Fame without Curry’s vote. Bonds and Clemens fell short of the required votes and are now off voters’ ballots.

By KEN POWTAK Associated PressBOSTON — Franchy Cordero hit a grand slam with two outs in the bottom of the 10th inning, lifting the surging Boston Red Sox to an 8-4 victory over the Seattle Mariners on Sunday.Trevor Story continued his recent power surge with his fifth homer over the Green Monster in four days and Christian Arroyo added a solo shot for Boston, which posted its season-high fifth straight victory and completed a four-game sweep over Seattle.The Red Sox trailed 4-3 when pinch-hitter Christian Vázquez singled against Andrés Muñoz (1-2) in the 10th, advancing automatic runner Bobby Dalbec. After...
BOSTON, MA・1 DAY AGO
CBS Boston

BOSTON -- With five straight victories and wins in nine of their last 12 games, the Red Sox finally have something to feel good about. They decided on Sunday to spread those good vibes with the Boston Celtics.On their way out of Fenway Park following their walk-off win to complete a four-game sweep of the Mariners, the Celtics were decked out -- in head to toe, in some cases -- in Boston Celtics gear.Franchy Cordero, who hit the walk-off grand slam with two outs in the bottom of the 10th inning, was representing Marcus Smart, as was Trevor Story. Smart took notice of both players wearing his jersey and shared his appreciation on Twitter:Tanner Houck wore the full uniform, shorts and all, to represent Jayson Tatum, a jersey which was a popular choice among Red Sox players:The Celtics will host the Miami Heat in Game 4 in Boston on Monday night, looking to even the series at two games apiece. The Red Sox will be in Chicago, but they made sure to lend their support before heading out of town.
BOSTON, MA・13 HOURS AGO
CBS Boston

BOSTON -- Rarely is a choice for an award so simple as it was for Trevor Story as the American League Player of the Week.The Red Sox' shortstop had by far his best week of the season, belting six homers in seven games played. That included a three-home run game on Thursday against the Seattle Mariners. He followed up that game with a grand slam on Friday night.Overall, Story went 9-for-25 at the plate, good for a .360 average, with a double, the six homers, and 14 RBIs. He also walked five times, posting a 1.572 OPS for the week, during which the Red Sox went 6-1.The week was sorely needed for Story, who had been hitting just .196 with one home run in his first 29 games after signing a four-year deal with the Red Sox.He raised his season batting average by 30 points in the week, while upping his OPS by 187 points.This marked the fourth time that Story has earned a Player of the Week recognition, but obviously his first as a player in the American League.
BOSTON, MA・6 HOURS AGO