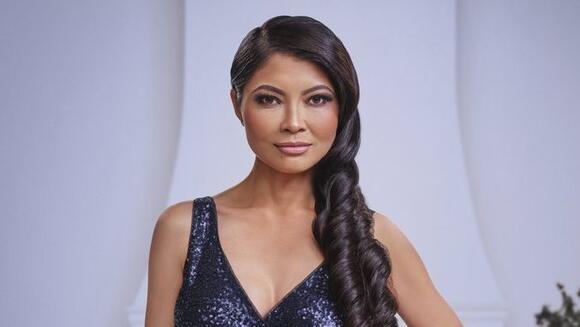 Bravo has fired Real Housewives of Salt Lake City ‘s Jennie Nguyen over multiple insensitive social media posts she shared in 2020, many of which mocked the Black Lives Matter movement.

“ Bravo has ceased filming with Jennie Nguyen and she will no longer be a cast member of The Real Housewives of Salt Lake City ,” The network said in a statement released via their official Twitter account on Tuesday.

“We recognize we failed to take appropriate action once her offensive social media posts were brought to our attention. Moving forward, we will work to improve our processes to ensure we make better informed and more thoughtful casting decisions.”

Executive producer Andy Cohen addressed the controversy briefly on his podcast, Radio Andy, on Monday. He told listeners he had seen Nguyen’s “disgusting and upsetting posts” and that “serious discussions” were happening that he couldn’t address at the time.

Last week, Nguyen shared an apology for her actions via Instagram.

“I want to acknowledge and apologize for my deleted Facebook posts from 2020 that resurfaced today,” she wrote. “At the time, I thought I was speaking out against violence, but I have since learned how offensive and hurtful my words were. It’s why I deactivated that account more than a year ago and why I continue to try to learn about perspectives different than my own. I regret those posts and am sincerely sorry for the pain they caused.”

She has not addressed her firing from the reality series publicly.

Click here to read the full article. Pete Davidson has taken to Instagram to reflect on his imminent departure from Saturday Night Live. While Davidson does not have an account on the social media platform, he posted a long and emotional message via the account of Dave Sirus, who writes for the show and also worked on his 2020 film, The King of Staten Island. His words accompany a video of him celebrating wrap of production on his first episode of SNL with fellow comic Jerrod Carmichael. “This video was taken 8 years ago. Jerrod sent it to me last night and it...
NFL・2 DAYS AGO
Deadline

Cannes 2022 Photos: Kristen Stewart, Viggo Mortensen And Sharon Stone At The ‘Crimes Of The Future’ Premiere

Click here to read the full article. The premiere of David Cronenberg’s guts-y Crimes of the Future prompted walkouts and a six-minute standing ovation in Cannes. The event also drew the film’s stars Kristen Stewart, Viggo Mortensen and Lea Seydoux as well as the likes of Sharon Stone, Maggie Gyllenhaal and Emily Ratajkowski. Click on the photo above to see a gallery of images from Crimes of the Future and many other Cannes red carpets. More from DeadlineFull List Of Cannes Palme d'or Winners Through The Years: Photo Gallery'Decision To Leave' Filmmaker Park Chan-wook Knows Somethin' About Love, Especially When It's Between A Cop & Suspect - Cannes'Crimes Of The Future's David Cronenberg Slams Conservative U.S. Politics: "In Canada...We Think Everyone In The U.S. Is Completely Insane" - CannesBest of DeadlineOscars 2023 Telecast And Nomination Dates Set2022-23 Awards Season Calendar - Dates For The 95th Oscars, Emmys, Tonys & MoreAwards Season Red Carpet Photos: Grammys, Oscars, SAG Awards & More
MOVIES・18 HOURS AGO
Deadline

‘My Next Guest Needs No Introduction’: Will Smith Tells David Letterman About Childhood “Pain” & More In Episode Taped Prior To Oscars

Click here to read the full article. Netflix yesterday unveiled an episode of its talk show My Next Guest Needs No Introduction taped prior to the 2022 Oscars, which saw disgraced actor Will Smith sit down with former late-night host David Letterman to discuss his 2021 memoir Will, his Oscar-winning King Richard role, “pain” stemming from his childhood and more. The interview saw Smith reference the first line from his memoir by admitting that he’s always thought of himself as “a coward,” given a traumatic experience at age nine. It was at this point in his life that he watched his mother...
NFL・2 DAYS AGO
Hello Magazine

Princess Eugenie has taken to her Instagram Stories to make an exciting announcement related to The Anti-Slavery Collective, which she co-founded with her best friend Julia de Boinville back in 2017. Resharing a message from the charity organisation, the mother-of-one revealed she was posting "news from my charity". WATCH: Princess...
CELEBRITIES・28 DAYS AGO
HipHopDX.com

Too $hort has worked with a score of legendary producers throughout his almost 40-year career, from Jermaine Dupri and Lil Jon to Daz Dillinger and DJ Pooh. But one big-name beatsmith he passed up the opportunity to work with was Kanye West. During a recent interview with VladTV, the Bay...
CELEBRITIES・28 DAYS AGO
Popculture

Netflix has canceled another one of its major shows, with this one getting the ax after only two seasons. Variety reports that hit sci-fi drama Raising Dion has been dropped by the streamer, following its recent season debut. The news seems to have been revealed by series star Sammi Haney, who shared the news with fans on Instagram. "Sad to say that Raising Dion is CANCELED [sic] Thank you for all of the amazing support we got from all of our wonderful fans!" Haney wrote, in part. "Season 2 was a success, equal to Season 1, even if just looking at how many people watched all of it and wanted a season 3!"
TV SERIES・27 DAYS AGO
ComicBook

After weeks of silence, Chris Rock has finally addressed his now-infamous incident with Will Smith at March's 94th Annual Academy Awards. During another sold-out show at Baltimore's Lyric Performing Arts Center on Friday, Rock directly referenced the slap, but only spent a second on it before moving on with his set.
BALTIMORE, MD・29 DAYS AGO

Last month it was revealed that Sharon Osbourne would be returning to television, partnered with Piers Morgan on a new U.K. series named The Talk. This comes nearly a year after Osbourne was suspended and eventually exited the U.S. talk show The Talk after expressing her support for Morgan in an intense discussion over race with co-host Sheryl Underwood. Now, in a new interview with the U.K.'s Sunday Times, Osbourne reveals how cancel culture impacted her as she eventually parted ways with her longtime daytime talk series amidst public backlash.
CELEBRITIES・29 DAYS AGO
The US Sun

GENERAL Hospital revealed a major character change is coming to the show this week as one of its stars battles health issues. There are often comings and goings happenings on soaps, and the latest cast switch-up involves longtime cast member Nancy Lee Grahn. Nancy, who turns 66 on Thursday, has...
CELEBRITIES・29 DAYS AGO
People

Paulina Gretzky walked down the aisle in Vera Wang!. The bride shimmered during her wedding with pro golfer Dustin Johnson on Saturday at Tennessee's Blackberry Farm. Gretzky showed off the stunning look on Instagram Monday in a photo of the newlyweds kissing. "4/23/22♥," she simply captioned the post. For...
BEAUTY & FASHION・27 DAYS AGO
musictimes.com

Andrew Woolfolk, popularly known for being Earth, Wind & Fire's longtime saxophonist, has passed away at the age of 71; what was his cause of death?. Fellow bandmate Philip Bailey took to Instagram to confirm the tragic news and recalled their early years, saying they met in High School and quickly became friends and bandmates.
BILOXI, MS・27 DAYS AGO

A woman has revealed several “red flags” that she found in the apartment of the man she’s dating, which included two books about pregnancy and a woman’s ring.In a recent video shared to TikTok, Devin, @discoveringdevin, filmed herself sitting on a bed and putting her thumb down, as the text reads: “Red flags in his apartment.”She then began by showing four Apple MacBooks, all placed on top of each other, on a desk. “Four laptops…what are you hiding?” Devin wrote in the text over the clip.Next, she documented what appeared to be a “girl’s ring” on a white shelf....
RELATIONSHIP ADVICE・28 DAYS AGO
Hello Magazine

Kate Hudson has realized one of her dreams and has taken to Instagram to share the incredible news with her 15 million followers. Sharing two pictures of her looking casual in a pair of baggy dip-dyed trousers and a white tank top, and singing into a microphone, the actress announced a surprising career change.
CELEBRITIES・28 DAYS AGO
Popculture

90 Day Fiancé stars Anna-Marie Campisi and Mursel Mistanoglu have added a little boy to their family! The couple, who tied the knot on Season 7 of the TLC reality show, announced on Instagram this week that their son, Gokhan John, had been born via a surrogate on Monday, April 11 after the couple's initial struggle with fertility.
FAMILY RELATIONSHIPS・28 DAYS AGO
Outsider.com

It seems Coi Leray is getting fed up with the drama. She and her father, Benzino, have not seen eye to eye for quite some time, and despite numerous attempts to mend their relationship, they keep ending up back at square one. Yesterday, 50 Cent, whose been feuding with Benzino...
CELEBRITIES・29 DAYS AGO
Popculture

Spring is always a big time for engagements and weddings, and two beloved internet personalities are the latest to update their relationship status. On April 18, Rachel "Seltzer" Quirico revealed she and longtime boyfriend Trevor "TorcH" Housten were tying the knot after 17 years together. Both of them are beloved figures in the esports world, with Seltzer notably starring in the Syfy reality show WCG Ultimate Gamer. She's also hosted numerous esports tournaments and events for TV/streaming outlets; she also made a recent appearance on G4 TV's Boosted.
RELATIONSHIP ADVICE・28 DAYS AGO
Reality Tea

Name a more loyal housewife than Dolores Catania. I’ll wait! The Real Housewives of New Jersey star has proven over her last 5 seasons on the show that she is ride or die for the ones she loves. She’s even besties and business partners with ex-husband, Frank Catania. And this season, she let him move […] The post Dolores Catania Reveals Wasn’t Invited To Teresa’s Giudice’s Engagement Party appeared first on Reality Tea.
CELEBRITIES・29 DAYS AGO
PopCrush

90 Day Fiancé: Before the 90 Days star Johnny Chao is showing off a new look on social media. The reality TV star rocked a fresh-faced look on the show. However, Chao debuted some new facial hair in his most recent post on Instagram. More specifically, he grew a beard and mustache.
TV & VIDEOS・27 DAYS AGO