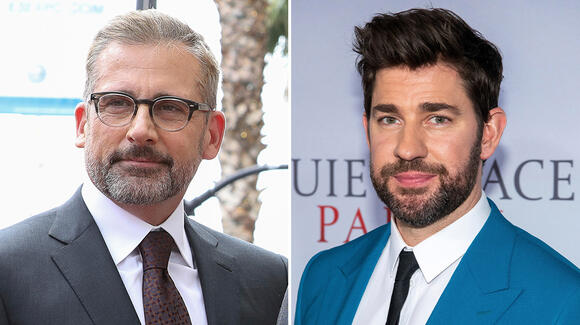 For the first time since leaving Dunder Mifflin, “The Office” co-stars Steve Carell and John Krasinski will reunite on-screen in Paramount’s new family movie “ If .”

Krasinski will write, direct and star in the film. Along with Carell, “An Officer and a Gentleman” and “Roots” star Louis Gossett Jr., “Minari” breakout Alan Kim, and “The Walking Dead” actor Cailey Fleming have also been added to the call sheet. They will join previously announced cast members Ryan Reynolds, Phoebe Waller-Bridge and Fiona Shaw.

The official logline has yet to be revealed, but the story is based on Krasinski’s original idea about a child’s journey to rediscover their imagination. It is similarly unclear who anyone will be playing in “If.”

The film is scheduled to be released on Nov. 17, 2023, just before the Thanksgiving holiday.

Krasinski shared his excitement on social media, writing  “Ah, what if one day I could assemble my dream cast? What… IF.”

As Jim Halpert and Michael Scott on “The Office,” Krasinski and Carell’s characters depicted a one-sided workplace bromance on the long-running NBC sitcom. Following “The Office,” Krasinski made a name for himself as a filmmaker, directing the box office hits “A Quiet Place” and “A Quiet Place Part II.” Carell recently starred in Netflix’s TV series “Space Force” and the Apple TV Plus workplace drama “The Morning Show.” On the film front, his latest credits include Jon Stewart’s political comedy “Irresistible,” Adam McKay’s political satire “Vice” and Universal’s upcoming apolitical animated sequel “Minions: The Rise of Gru.”

Krasinski will produce “If” through via his company, Sunday Night, with partners Allyson Seeger and Andrew Form. Reynolds will also produce via his company, Maximum Effort. George Dewey will serve as an executive producer.

Kim is best known for his celebrated role in “Minari,” the heartwarming family drama from writer-director Lee Isaac Chung. He’s gearing up to star alongside Elsie Fisher in “Latchkey Kids” and will appear next opposite Awkwafina in “Nora From Queens. The 14-year-old Fleming has appeared in “Star Wars: The Force Awakens,” the Disney Plus series “Loki” and “Peppermint” with Jennifer Garner.

Click here to read the full article. John Woo’s “Silent Night” recently wrapped principal photography in Mexico City. The film is the first U.S. action movie directed by the iconic helmer Woo in more than a decade. In “Silent Night,” Godlock (played by Joel Kinnaman) is a father on a mission to avenge his young son who was tragically caught in the crossfire of gang violence on Christmas Eve. Shot and nearly killed while in pursuit of the murderers, Godlock vows to avenge his son by any means necessary. Kinnaman is pictured above in an exclusive first look still from the actioner. The film...
MOVIES・19 HOURS AGO
Variety

Click here to read the full article. One of the leading Emmy contenders this year is Hulu’s “Only Murders in the Building,” which could be one of the most nominated comedy series in the field. In addition, the comedy series, which will drop its second season in the middle of Emmy nom voting, could make history for two of its guest actor comedy submissions — Nathan Lane and James Caverly. Lane could become the most nominated actor in the history of the guest actor comedy category (beginning in 1975), while Caverly will be the first deaf actor ever recognized. A likely frontrunner...
MOVIES・1 DAY AGO
Variety

‘The Boys’ Are Back In Action-Packed, Bloody Season 3 Trailer (TV News Roundup)

Click here to read the full article. After a two year wait, “The Boys” is amping up for a bloody return. Amazon Prime Video has released the first full trailer for the popular satirical superhero series’ upcoming season. Based on the Garth Ennis and Darick Robertson comic book of the same name, “The Boys” focuses on a world where superheroes are employees for the powerful Vought International corporation, which monetizes their exploits and uses its power to hide the fact that the majority of them are corrupt. The series follows the titular Boys, a group of vigilantes led by the gruff...
TV SERIES・1 DAY AGO
Variety

Click here to read the full article. Harrison Ford and Helen Mirren are set to star in Taylor Sheridan’s new “Yellowstone” prequel “1932” at Paramount+, Variety has learned. The show follows the Dutton family in the titular year, a time of Prohibition, the Great Depression, and westward expansion. “1932” is a followup to “1883,” the latter of which told the story of the Dutton family as they made their way to Montana to found what would become the Yellowstone Ranch in the mothership series. “1932” was ordered to series at Paramount+ back in February. The show falls under Sheridan’s expansive overall deal...
MOVIES・7 HOURS AGO

Click here to read the full article. Jeff Bridges is on the run and out for blood in the first trailer for “The Old Man,” the new FX drama series premiering June 16. Based on Thomas Perry’s 2017 thriller novel of the same name, “The Old Man” stars Bridges as Dan Chase, a former CIA operative who has spent decades living off the grid in hiding from his former agency. When an assassination attempt forces him out of hiding, Chase ends up on the run from Harold Harper (John Lithgow), the FBI’s assistant director for counterintelligence with whom he shares a...
TV SERIES・1 DAY AGO
Hello Magazine

Robin Roberts got emotional as she opened up about her relationship with partner Amber Laign, especially in the midst of a challenging health battle. The Good Morning America star made an appearance on The Ellen DeGeneres Show to promote her new book, Brighter By the Day. VIDEO: Robin Roberts enjoys...
CELEBRITIES・22 DAYS AGO
SheKnows

Click here to read the full article. It seems like everyone was rooting for Renée Zellweger and Ant Anstead to get together, including an unexpected duo: the Property Brothers. Drew and Jonathan Scott recently revealed that they were the ones that ended up getting Zellweger and Anstead to meet, and subsequently fall in love. And their hard work ended up paying off! Back on April 14, 2022, the Scott brothers sat down with ExtraTV to talk about everything from Drew’s upcoming fatherhood to Jonathan loving GF Zooey Deschanel’s Vanity Fair gown. While we loved the entire interview, we’re losing it over...
CELEBRITIES・23 DAYS AGO
The Independent

Laughter erupted in courtroom after Johnny Depp said he doesn’t watch his own movies and couldn’t recall the question he was asked. “I don’t watch them. I feel better not watching them. What was the question again?” Mr Depp said to laughter from the room. Johnny Depp trial – latest updates“Order in the court, or I will have you removed,” Judge Azcarate said. “Understood? Thank you.”The defamation trial between Mr Depp and Amber Heard began on Monday 11 April in Fairfax, Virginia following Mr Depp’s lawsuit against his ex-wife in March 2019. Mr Depp is arguing that she defamed him...
CELEBRITIES・22 DAYS AGO

Netflix has canceled another one of its major shows, with this one getting the ax after only two seasons. Variety reports that hit sci-fi drama Raising Dion has been dropped by the streamer, following its recent season debut. The news seems to have been revealed by series star Sammi Haney, who shared the news with fans on Instagram. "Sad to say that Raising Dion is CANCELED [sic] Thank you for all of the amazing support we got from all of our wonderful fans!" Haney wrote, in part. "Season 2 was a success, equal to Season 1, even if just looking at how many people watched all of it and wanted a season 3!"
TV SERIES・21 DAYS AGO
Hello Magazine

Gwyneth Paltrow is a doting mom to two teenage children, Apple and Moses, who she shares with ex-husband Chris Martin. The family are notoriously private, but over the weekend the award-winning actress gave a rare insight into their upcoming plans - and how they are changing things up this year for Mother's Day.
FAMILY RELATIONSHIPS・21 DAYS AGO
The Hollywood Reporter

Click here to read the full article. “Pirates of the Caribbean” producer Jerry Bruckheimer reminded fans in a recent interview with The Sunday Times that the future of his Disney mega-franchise does not currently include Johnny Depp. The actor appeared as Jack Sparrow in all five “Pirates of the Caribbean,” earning an Oscar nomination for “Curse of the Black Pearl.” The most recent “Pirates” movie, “Dead Men Tell No Tales,” was released in 2017. Bruckheimer said two “Pirates” scripts are currently in development, but neither include Depp’s former franchise mainstay. “Yes. We’re talking to Margot Robbie. We are developing two Pirates...
MOVIES・1 DAY AGO
Popculture

One of the stars of This Is Us is on the move to a new network in advance of the show's series finale. Deadline reported in March that Chris Sullivan, who plays Toby on the NBC series, will headline a comedy pilot for ABC. His new show is set to be titled The Son In Law.
TV SERIES・21 DAYS AGO
Variety

Click here to read the full article. As the war in Ukraine approaches a grim, three-month mile marker, and the Russian military continues its relentless onslaught, the harsh crackdown on domestic opposition by the Putin regime has left a beleaguered film industry pondering its next steps. Many Russian filmmakers fear they’ll have no choice but to toe the party line, or to flee a country that is increasingly being shut out of the international community. Two-time Oscar nominee Alexander Rodnyansky (“Leviathan,” “Loveless”), the Kyiv-born producer who has called Russia home for nearly three decades, left Moscow on March 1 after being...
WORLD・21 HOURS AGO
Popculture

Spring is always a big time for engagements and weddings, and two beloved internet personalities are the latest to update their relationship status. On April 18, Rachel "Seltzer" Quirico revealed she and longtime boyfriend Trevor "TorcH" Housten were tying the knot after 17 years together. Both of them are beloved figures in the esports world, with Seltzer notably starring in the Syfy reality show WCG Ultimate Gamer. She's also hosted numerous esports tournaments and events for TV/streaming outlets; she also made a recent appearance on G4 TV's Boosted.
RELATIONSHIP ADVICE・22 DAYS AGO
Variety

Click here to read the full article. When Nicola Coughlan announced that “Bridgerton” Season 3 will focus on Colin Bridgerton (Luke Newton) and Penelope Featherington’s love story, viewers couldn’t help but wonder why the show was straying from the Julia Quinn books it’s based on. While the first two seasons of the Netflix hit followed the books — first focusing on Daphne Bridgerton (Phoebe Dynevor) and then on Anthony Bridgerton (Jonathon Bailey), the third book is about Benedict. Jess Brownell, who stepped in as the new showrunner as Chris Van Dusen exited, exclusively shares the reasoning with Variety. “I really feel like it’s...
TV SERIES・1 DAY AGO
Variety

Click here to read the full article. Amber Heard claims that Warner Bros. “didn’t want to include me” in the upcoming “Aquaman” sequel due to the fallout of her divorce from Johnny Depp. The actor said during her defamation trial against Depp that she was “actively scheduling timing for filming” the second “Aquaman” movie until Depp’s team called her a liar regarding her abuse claims against Depp. Heard said that “communications” about the sequel “stopped at that point.” Heard stars as Mera in several comic book films from Warner Bros. and DC Entertainment. She debuted as the character in “Justice League”...
MOVIES・15 HOURS AGO