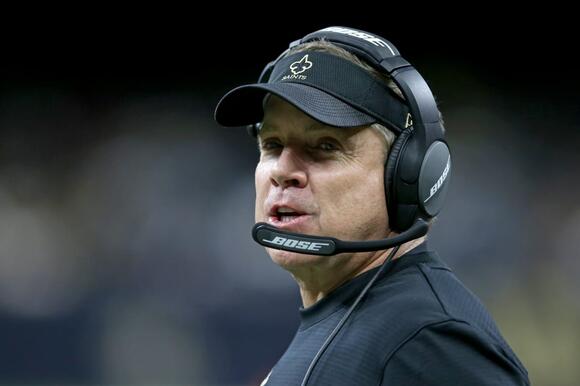 The New Orleans Saints enter the conversation for a new head coach following Tuesday's news. According to NFL Network's Ian Rapoport , Sean Payton has informed the Benson family that he will be "stepping away" from the team after 16 seasons. According to Nick Underhill of NewOrleans.Football, Payton is retiring and will not be interested in coaching as of this time.

Hired in 2006, Payton, 58, became one of the two faces to transform the Saints from one of the league's worst teams into a stable organization. Teamed with future Hall of Fame quarterback Drew Brees, the Saints became one of the NFC's best franchise, finishing with nine seasons of 10-plus wins and nine playoff appearances during that span.

This past season without Brees, the Saints finished 9-8, missing the postseason for the first time since 2016. Jameis Winston was expected to replace Brees, but a torn ACL in Week 8 cost him the remainder of the season, leading New Orleans into playing four different quarterbacks over the 17-game period.

Payton finishes his time with the Saints with a 152-89 record and a Super Bowl win in 2009. Multiple reports suggest that the Dallas Cowboys could be interested in firing Mike McCarthy in order to bring Payton over after an early Wild Card Round Loss to the San Francisco 49ers earlier this month.

JAN 24: AIKMAN, PAYTON AND TV The coaching carousel has in recent days included the name of Sean Payton.

To the Dallas Cowboys, as the head coach in place of the suddenly beleaguered Mike McCarthy?

Or to FOX Sports, in place of the desired-by-Amazon Troy Aikman?

Front Office Sports is reporting that FOX Sports is eyeing at New Orleans Saints coach Payton as the replacement for Aikman should the Hall of Fame take a job doing games for the new "Thursday Night Football'' on Amazon.

The Payton news comes on the heels of NFL Network insider Ian Rapoport reporting that the Saints' iconic and long-time boss has not committed to returning to the team. And of course mixed into the rumor mill is another Cowboys connection beyond Aikman's legendary ties to Dallas, as Cowboys owner Jerry Jones' unwillingness to announce his public support for McCarthy feeds the idea of him possibly flirting with hiring Payton, a former Cowboys assistant who maintains a good relationship with the Joneses.

JAN 23 RAMS OUST BUCS We’ve been trained to believe that Tom Brady leading his team to clutch wins is inevitable. On Sunday in Tampa Bay, his Buccaneers almost did it again.

Instead, the Los Angeles Rams endured a late comeback to kick a field goal in the final second to secure a 30-27 win.

The defending Super Bowl champions played host to the Rams in the NFC divisional round on Sunday, looking to avenge a pair of losses to the one team they've played but yet to beat since Brady joined the Bucs in 2020.

That’s right: It’s actually these Rams - which just happened for a third time - beating the 44-year-old quarterback as a Buc that is seemingly inevitable.

The Rams are now a game away from the Super Bowl, with Cooper Kupp catching a deep ball from QB Matthew Stafford in the final minute to set up the upset win.”

Said Brady before the game of the Rams: “It’s a very talented football team, one of the great teams in the NFL. ... It's going to be a very, very difficult game for us.''

The Bucs are now 29-10, including 5-1 in the playoffs, since Brady's arrival - a brilliant mark, but for one day against Stafford (who just got the first two postseason wins of his 13-year career) not good enough.

Follow along with Falcon Report for up-to-date news on the NFL firings and hirings
ATLANTA, GA・2 DAYS AGO
Falcon Report

He visited with the Falcons earlier this offseason, but Landry signs with the enemy.
ATLANTA, GA・2 DAYS AGO
Falcon Report

The Falcons won with speed last season at receiver, but the addition of Bryan Edwards changes that notion?
ATLANTA, GA・1 HOUR AGO

Follow along with Falcon Report for up-to-date news on the NFL firings and hirings
ATLANTA, GA・5 HOURS AGO
Falcon Report

These dates definitely need to be circled.
ATLANTA, GA・1 DAY AGO
Falcon Report