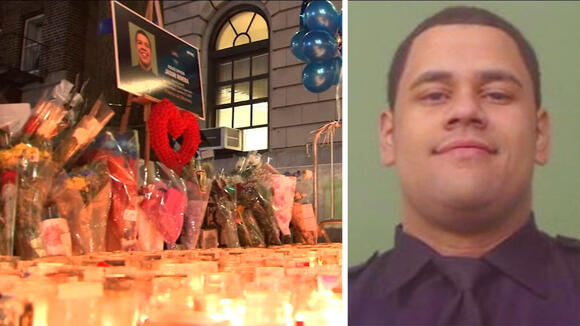 NYPD officer Wilbert Mora, who was shot and his partner killed while responding to a domestic call in Harlem, has died from his injuries, NYPD Commissioner Keechant Sewell announced Tuesday. "It's with great sadness I announce the passing of Police Officer Wilbert Mora," she said. "Wilbert is 3 times a hero. For choosing a life of service. For sacrificing his life to protect others. For giving life even in death through organ donation. Our heads are bowed & our hearts are heavy." The 27-year-old officer, a four-year veteran of the NYPD, was shot in the head Friday night in Harlem. "Wilbert Mora was a hero," Mayor Eric Adams said. "He served his city, protected his community and gave his life for our safety. Our hearts are heavy. Our city is in mourning. To his family, loved ones, and brothers and sisters in the NYPD: Your city is standing with you today and always." Mora's partner, rookie Officer Jason Rivera, 22, was also killed. "True heroes never die," PBA President Patrick Lynch said. "Our brother Police Officer Wilbert Mora has left us, but he will live on in the heart of every New York City police officer from this day forward. We are called upon to put ourselves between evil and the good people of this city. Police Officer Mora showed us what it means to carry out our mission with courage, skill and humanity. His sacrifice will guide us as we continue that mission, but we cannot succeed alone. We ask you once again to join us. Help us mourn our fallen heroes, and help us carry on in their name." WATCH | Pat Lynch: This is a 'turning point' in police-community relations

N.J. Burkett has more with PBA President Pat Lynch outside the 32 Precinct in Harlem.

Officers lined the streets outside NYU Langone Tuesday evening ahead of a procession for Mora.

Rivera was the first to encounter the shooter in a back bedroom after his mother called 911 saying he was being problematic. Funeral plans have now been finalized for Rivera, who will be laid to rest later this week. Services for Rivera will be held at St. Patrick's Cathedral with a wake on Thursday from 1-8 p.m. and a funeral on Friday at 9 a.m. As for Mora, a viewing service is scheduled to be held at St. Patrick's on Tuesday, February 1, from 1-8 p.m. followed by a funeral on Wednesday at 10 a.m. "I join all of New York today in mourning the heartbreaking death of Officer Wilbert Mora," Attorney General Letitia James said. "He was a hero until the end. Officer Mora and his partner, Officer Jason Rivera, showed courage in the face of imminent danger to protect New Yorkers. Their bravery exemplified their commitment to protecting the city they loved. Both will forever be remembered as heroes who dedicated their lives to making New York safer and stronger. I pray for strength and ease for their families and loved ones." ALSO READ | Mayor Adams says all city agencies will join fight against gun violence in NYC

In a final act of heroism, Mora fulfilled his wishes of being an organ donor. "When Officer Wilbert Mora's family was notified of his passing, his family knew their brave and dedicated son would want to continue to save lives, even in death," LiveOnNY President and CEO Leonard Achan said. "Officer Mora's final gift was the gift of life to others in need. He was transferred from Harlem Hospital to NYU Langone Health, where we have honored the family's wishes for him to be an organ donor hero, so that he may 'Live On' while saving the lives of others. We extend our deepest condolences to the families, and friends of both officers, and our thoughts and prayers remain with them at this difficult time." Those who knew him were in mourning. "He was just such a warm, gentle, giving young man," John Jay College of Criminal Justice professor Gregory Sheppard said. "It's tragic." The news was crushing for Sheppard, who taught Mora in his music theory class. "I said, 'Well why do you want to be a police officer?'" Sheppard said. "He said, 'Professor, I really want to help people. I really want to help people.'" Sheppard says Mora enjoyed the music class so much he joined the choir, and he remembers one particularly special moment that he re-watched on video when he heard Mora had been shot. "We were singing a song called 'Total Praise,' and there was a line of text that said, 'You are the source of my strength, you are the strength of my life," he said. "And while he was singing that, one of the singers from the row in front of him turned around and looked at him, and he beamed a huge smile. So I hope that peace and comfort that he found in that song is comforting him now." President Joe Biden released a statement on his death: "I'm deeply saddened by the loss of NYPD Officer Wilbert Mora as a result of last Friday's senseless shooting. Today is a sad reminder of the risks the men and women of law enforcement face to protect us, and of the work we all must do to end the scourge of gun violence." Mayor Adams has ordered all flags on all city buildings, as well as stationary flagstaffs throughout the five boroughs, to continue to be flown at half-staff as a mark of respect for fallen NYPD Officer Wilbert Mora. ALSO READ | How to help families of NYPD officers slain in line of duty

Jurors found a man guilty of all charges for murdering a woman he briefly dated. “I’m still alive,” Brandon Roberts, 29, yelled Tuesday as judicial marshals took him from that courtroom in Bridgeport, Connecticut, according to The Connecticut Post. He shot therapist Emily Todd, 25, in the back...
29 DAYS AGO
NBC News

UVALDE, Texas — The man who opened fire in a Texas elementary school on Tuesday, massacring 19 children and two adults, was a loner who kept to himself and avoided any kind of conversation, according to the boyfriend of the gunman’s mother. The shooter, identified by multiple law...
UVALDE, TX・6 HOURS AGO
CBS News

A 60-year-old man who has been charged in the January 6 insurrection at the Capitol has been identified as the son of a fames American artist. Vincent Gillespie, who has been in a legal battle against his stepmother to gain control of paintings by his father, Gregory Gillespie, was arrested in February on charges relating to the Capitol riot.
ATHOL, MA・29 DAYS AGO
The Independent

The youngest victim of a family of four stabbed to death at home in southeast London had moved in just days earlier, it has emerged as a murder suspect remains in hospital.Grandmother Dolet Hill, 64, her partner Denton Burke, 58, daughter Tanysha Ofori-Akuffo, 45, and granddaughter Samantha Drummonds, 27, were all found dead inside the terraced house in Delaford Road, Bermondsey, after officers forced entry at about 1.40am on Monday.It has since emerged Samantha, the daughter of Tanysha, reportedly told a neighbour she was returning to the family home in Bermondsey for a week while she had some work done...
PUBLIC SAFETY・29 DAYS AGO

Paul Williams fought for his life against a large black bear on the afternoon of April 21 outside of his home in Beaubassin East, a rural Canadian community in southern New Brunswick. “She got me in the face, she got me on my arm,” he said, of his wounds estimated...
NEW BRUNSWICK, NJ・29 DAYS AGO
CBS Baltimore

BALTIMORE (WJZ) — Baltimore Police released images Tuesday of seven people of interest in the fatal shooting of a Fells Point bouncer early Monday morning. Marco Nunez, the 30-year-old bouncer of Rodos Bar, was found with multiple gunshot wounds in the 1700 block of Thames Street around 1 a.m. Monday. He was pronounced dead at Johns Hopkins Hospital. Homicide detectives are looking to identify and question three men and four women pictured in a release: female 1a, BPD female 2, BPD female 3 and male 2, BPD female 4, BPD male 1, BPD male 2a, BPD male 3a, BPD Male 3b, BPD Baltimore Police urge anyone who recognizes the people to call detectives at (410) 396-2100. Governor Larry Hogan on Tuesday announced the state will match the Metro Crime Stoppers’ $8,000 reward for information in the slaying, doubling the reward to $16,000. Tips can be sent to Metro Crime Stoppers Maryland at 1-866-756-2587.
BALTIMORE, MD・29 DAYS AGO
Salon

The first time I bought my child a bulletproof shield, he was in kindergarten. A school shooting had happened. I forget which one. My child was too young for me to explain the story then, too young to worry that he might accidentally hear about the violence on the news, which I wouldn't listen to around him. Too young for social media. But not too young to be in danger at school: a place children are supposed to be safe, with carpet squares for sitting in a circle, a cubbyhole with his name on laminated paper with a smiling red apple.
MARYSVILLE, WA・6 MINUTES AGO