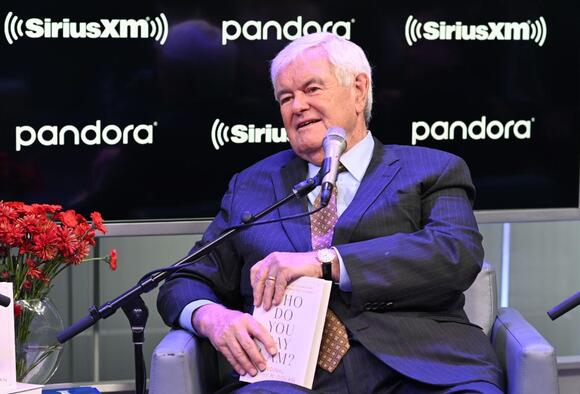 During an interview Sunday with Fox host Maria Bartiromo , former Republican Speaker of the House Newt Gingrich said he believes that members of the special committee investigating the deadly Jan. 6 Capitol riot could face jail time.

“I think when you have a Republican Congress, this is all gonna come crashing down and the wolves are going to find out that they’re all sheep and they’re the ones, in fact, I think are going face a real risk of jail for the kind of laws they are breaking,” said Gingrich, who also formerly served as a U.S. representative for Georgia.

Gingrich did not specify what laws the committee members have broken. A CNN analysis found that he may have been referring to abuse of power.

He told Bartiromo that by next January, both the House of Representatives and the Senate will be controlled by Republicans. As of this month, both houses are narrowly controlled by Democrats. This slim majority has made it difficult for the party to pass some legislation, including President Joe Biden’s proposed “ Build Back Better ” spending bill.

“I think they’ve talked themselves into a dead end,” said Gingrich of the party Sunday.

Midterm elections slated for November will decide which party controls both houses and will include races for governor seats in 36 states. According to Five Thirty Eight , Gingrich’s prediction that Republicans will control both houses after the elections does have some history to back it up, as midterms generally favor the part that isn’t in control of the White House.

Since World War II, there has been a “decent” correlation with the president’s approval rating on midterm election day and seats their party lost in the House. Results of CAPS/Harris poll released this month show that Biden’s approval rating is at 39 percent.

Other indicators of the midterm elections include: generic-ballot polls, which Republicans were leading by an average of 0.5 points as of Jan. 5; special elections, which Democrats have recently over-performed in, and individual elections polls closer to the election date.

Garland and committee members are “people who’ve run amok,” Gingrich said. He added that he views them as “basically a lynch mob and unfortunately the attorney general of the United States has joined that lynch mob and is totally misusing the FBI.”

More than 700 people have been arrested for participating in the deadly riot, which was fueled by supporters for former President Donald Trump, who lost the 2020 presidential election to Biden. Rioters were attempting to prevent Congress from ratifying votes for Biden.

The special committee investigating the incident has also requested information from Republican members of Congress, including House Minority Leader Kevin McCarthy, and people close to Trump, such as his daughter Ivanka.

“All these people who have been so tough and so mean and so nasty are going to be delivered subpoenas for every document, every conversation, every tweet, every email because I think its clear that this these are people who are literally just running over the law, perusing innocent people, forcing them to spend thousands of dollars in legal fees, for no justification,” said Gingrich.

He expanded on his criticism of the Jan. 6 committee in an op-ed , where he proposed a new “Select Committee on Congressional Dishonesty and Abuse of Power.”

Since Gingrich made the comments, members of the committee have responded.

“That is just bizarre, I think Newt has really lost it,” said Democrat committee member Rep. Zoe Lofgren of California .

“A former Speaker of the House is threatening jail time for members of Congress who are investigating the violent January 6 attack on our Capitol and our Constitution,” said Republican committee member Liz Cheney of Wyoming in a tweet . “This is what it looks like when the rule of law unravels.”

Greene testified on Friday that she didn't recall whether she asked Trump to invoke military rule, despite telling Meadows to relay the idea to Trump.
ATLANTA, GA・21 DAYS AGO
The US Sun

ANOTHER batch of stimulus checks worth up to $1,200 is set to go out to thousands of Americans this month. Under California’s Golden State I (GSS 1) and Golden State Stimulus II (GSS II) programs launched in 2021, eligible residents are getting up to $1,100 and $1,200 respectively. In...
CALIFORNIA STATE・28 DAYS AGO
The Independent

A legal effort to ban Marjorie Taylor Greene from standing for re-election has been given the go-ahead by a federal judge, who denied the far-right Georgia congresswoman’s attempt to have the case against her thrown out – paving the way for further proceedings by the end of this week.The news led Ms Taylor Greene to complain that “I have to go to court on Friday and actually be questioned about something I’ve never been charged with and something I was completely against.”Ms Greene, a hardline pro-Trump Republican who has long circulated false conspiracy theories, is accused by campaigners of...
CONGRESS & COURTS・27 DAYS AGO
NBC News

MEXICO CITY — Mexican President Andrés Manuel López Obrador on Monday urged U.S. Latinos not to vote in November’s midterm elections for politicians who have “mistreated” them, in response to a comment by former U.S. President Donald Trump. Trump boasted at a rally in...
PRESIDENTIAL ELECTION・20 DAYS AGO

When President Joe Biden named Kamala Harris as his running mate, he promised his former campaign rival would be one of the most influential voices in the White House.
PRESIDENTIAL ELECTION・21 DAYS AGO
Business Insider

EXCLUSIVE: A group of Republican senators is introducing legislation to block the Biden administration from sending personnel and funding from the Department of Veterans Affairs (VA) to alleviate the crisis at the southern border. The senators are alarmed by the Biden administration's announced termination of Title 42 on May 23,...
CONGRESS & COURTS・20 DAYS AGO

Rep. Marjorie Taylor Greene (R-GA) speaks to supporters of former U.S. President Donald Trump at the Banks County Dragway on March 26, 2022 in Commerce, Georgia. This event is a part of Trump's Save America Tour around the United States. (Megan Varner/Getty Images) On Monday, CNN's Andrew Kaczynski and Em...
COMMERCE, GA・20 DAYS AGO
americanmilitarynews.com

The intelligence the U.S. shared with Ukraine helped it continue to resist Russian invading forces and even shoot down a transport plane carrying hundreds of Russian troops, a new report revealed. According to current and former U.S. officials who spoke with NBC News on Tuesday, the U.S. provided critical intelligence...
MILITARY・20 DAYS AGO
Business Insider

Harvard polled Americans under 30 who are likely to vote in the midterms and found 85% of them want some government action on student loan debt.
PRESIDENTIAL ELECTION・21 DAYS AGO
Newsweek

A federal judge cleared the legal path for Georgia voters to stop Greene from being able to run for re-election. The Georgia rep was stripped of her committee assignments over racist comments she made online.
GEORGIA STATE・26 DAYS AGO
Business Insider

The Kremlin has continuously insisted that Putin is in good health.
HEALTH・3 DAYS AGO
Business Insider

From a first-person perspective, the videos show an anti-tank missile system being fired at Russia armored vehicles seen across a field.
MILITARY・20 DAYS AGO

Recent "denazification" comments posted by Oleg Morozov, a member of the Russian parliament, could further strain tensions between Russia and Europe.
POLITICS・3 DAYS AGO
Newsweek

Individual judges may not like the policy choices of the Biden administration, but it is not their job to weigh in on that policy debate.
TEXAS STATE・21 DAYS AGO
The Atlantic

Last Monday, Malcolm Nance, an MSNBC talking head and former sailor in the United States Navy, showed up on the channel by satellite from Ukraine, dressed to kill. He wielded an assault rifle and wore full-camo military dress, including a ballistic helmet, and U.S. and Ukrainian flag patches. About a month ago, he said, he decided he was “done talking.” He then talked about how he had joined Ukraine’s international legion to help the country “fight [against Russia’s] war of extermination—an existential war.” Others have traced a similar journey. Andy Milburn, a journalist and ex-Marine who stopped writing and began training Ukrainians for combat, wrote an article about how he, too, was finished writing articles about Ukraine. “It just started to seem so frivolous,” he wrote, solemnly. “I didn’t want to be an observer.”
MILITARY・21 DAYS AGO