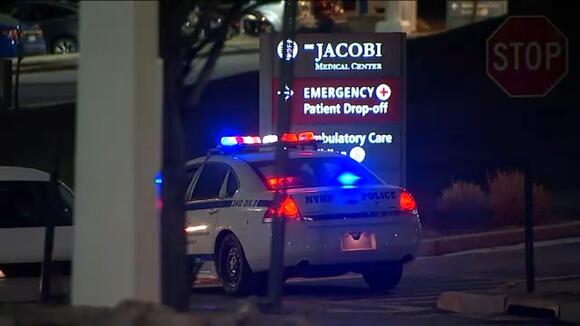 One person was shot in the waiting room of a busy trauma center at a Bronx hospital Tuesday. It happened around 12:30 p.m. near the entryway to Jacobi Hospital and near the emergency room, where the 35-year-old man was shot in the arm. Police say the victim was waiting to see a medical professional for a previous injury, and the gunman, wearing all black, was also waiting to see a medical professional for a separate, previous reason. Police believe the gunman and a second suspect went to the hospital searching for a patient, but somehow got into an argument with the victim, whom they did not know. ALSO READ | Mayor Adams unveils New York City's 'Blueprint for Safety' to combat violence

Authorities say looks were exchanged, and words possibly followed, before the gunman fired four times at the victim. In surveillance video obtained by Eyewitness News, the gunman police are looking for can be seen firing shots inside the hospital.

The victim was struck once in the left forearm and was rushed into surgery. The suspect and his friend fled the scene. The nature of their dispute is unknown. "Earlier this afternoon, an individual walked into the NYC Health + Hospital/Jacobi emergency department and shot another individual who was in the waiting room," the hospital said in a statement. "This was a cowardly act in a space where New Yorkers come for healing and care. Our health care heroes swiftly took care of the shooting victim and took actions to protect the other patients in the waiting room. Our immediate focus is on caring for the patient and ensuring the safety of our staff. We are working closely with the NYPD as they conduct their investigation." No arrests have been made, and the investigation is active and ongoing. Anyone with information in regard to this incident is asked to call the NYPD's Crime Stoppers Hotline at 1-800-577-TIPS (8477) or for Spanish, 1-888-57-PISTA (74782). ALSO READ | MTA officials address alarming rise in crime, promise more uniformed officers on platforms

I would say this is sad.. but it's in the Bronx... and I mean, the victim was already there waiting for another reason. The sad part is, I'm sure he never got seen for his original issue

Bring back Stop and Frisk and get rid of Bail Reform!

people have lost their mind, what is this world coming too

Buffalo supermarket mass shooting: What we know about the alleged gunman

Authorities say the suspect who fatally shot 10 people and injured three others at a Buffalo supermarket Saturday traveled from another New York county hours away, and that the attack may have been planned months beforehand.
BUFFALO, NY・4 DAYS AGO
ABCNY

Authorities say the suspect who fatally shot 10 people and injured three others at a Buffalo supermarket Saturday traveled from another New York county hours away, and that the attack may have been planned months beforehand.
BUFFALO, NY・3 DAYS AGO
ABCNY

A fight had broken out on Laurel Glen Drive and Shelton Police responded to the scene at around 11:55 p.m. on Saturday.
SHELTON, CT・3 DAYS AGO

The armed robbers struck at least four times throughout the month of April in Williamsburg, Brooklyn. Police are hoping surveillance videos will lead to their arrests.
BROOKLYN, NY・2 DAYS AGO
NBC News

Lawyers for a Florida man say he continues to fight for his life after he was “cooked alive” earlier this year, when a sheriff’s deputy is alleged to have shot him with a stun gun while the man was covered in gasoline from having fueled his dirt bike.
OSCEOLA COUNTY, FL・1 DAY AGO
CBS News

Police in Alabama say a South Carolina truck driver has confessed to killing a woman who disappeared 21 years ago and to hiding her body in a suitcase. Police in Bessemer, Alabama told news outlets that South Carolina native Brian Jones traveled back to Alabama last month and admitted to killing 41-year-old Janet Luxford in 2001. He then led investigators to a green suitcase with bones inside, police said.
BESSEMER, AL・24 DAYS AGO
Fox News

A sheriff in Florida arrested his own daughter on drug charges as his department continues its war on addictive substances. Franklin County Sheriff A.J. Smith gave a statement on April 19 confirming that his daughter, Kristen Kent, had been arrested under suspicion of meth trafficking two days prior. "Methamphetamine does...
FLORIDA STATE・23 DAYS AGO

Bodycam footage captured the snake slithering around the room as an officer attempted to capture it.
BOYNTON BEACH, FL・23 DAYS AGO
The Independent

A woman who lost both arms in a savage pit bull attack keeps asking her mum to hold her hand during recovery.While Kyleen Waltman, 38, is conscious and in "good spirits", she doesn’t fully comprehend the extent of her injuries, according to sister Amy Wynn."At times we don’t think she has gripped the fact she has lost her arms because she will ask our mama to hold her hand and mama says ‘I am’, and Kyleen will say, ‘OK’," Ms Wynn said in a GoFundMe update, which has raised more than $212,000 for medical expenses."It’s sad to see her like...
ACCIDENTS・23 DAYS AGO
Law & Crime

Jurors found a man guilty of all charges for murdering a woman he briefly dated. “I’m still alive,” Brandon Roberts, 29, yelled Tuesday as judicial marshals took him from that courtroom in Bridgeport, Connecticut, according to The Connecticut Post. He shot therapist Emily Todd, 25, in the back...
23 DAYS AGO

How was a man in a Louisiana prison who was supposed to be on suicide watch allowed to smoke insecticide, leading to his death?. That's the question Jennifer Bartie wants answered. The man was her son, 37-year-old Javon Kennerson, who died in December 2020 several weeks after falling into a sudden and severe mental health emergency.
PUBLIC SAFETY・24 DAYS AGO
Washington Examiner

Foster mother Cristal Starling faced a lose-lose proposition after officers raided her Rochester, New York, apartment in October 2020 and took all the cash they could find. Starling’s choices were simple: She could pay more than half of the seized amount to an attorney to help her fight back, or she could settle out of court and split her money 50-50 with law enforcement.
ROCHESTER, NY・24 DAYS AGO
Newsweek

The counterfeit bills will "look authentic, and may even feel authentic," warned Newton County Sheriff's Office in Georgia. Previous incidents have been linked to auto thefts.
24 DAYS AGO
The Independent

A first-class passenger on an Arizona-bound Delta Airlines plane was arrested for allegedly using homophobic slurs against a flight attendant and physically assaulting the crew member for not serving him a drink.Christopher Alexander Morgan allegedly threw a glass of ice and an onboard telephone at the flight attendant for refusing to continue serving alcohol to him.Mr Morgan was arrested when flight 2908 touched down at the Phoenix Sky Harbor International Airport on 22 April and is facing charges of interference with flight crew members, which can be punishable with up to 20 years in prison.The passenger called the flight...
PUBLIC SAFETY・24 DAYS AGO

The Santa Fe Sheriff doesn't believe Alec Baldwin is out of the woods just yet in regards to the ongoing investigation into Halyna Hutchins' death on the Rust film set. The late 42-year-old cinematographer was killed while on set of the Western film in October 2021 after the actor, 63, fired a prop gun that contained live rounds. While multiple individuals involved in the production of the film — including Baldwin, the film's assistant director David Halls, armorer Hannah Gutierrez-Reed and more — have been questioned about their apparent roles in the fatal mishap, the Santa Fe Sheriff's Department doesn't...
SANTA FE, NM・23 DAYS AGO
ABCNY

The shockwaves from the tragedy in Buffalo are being felt in New Jersey after the shooter's writings mentioned three towns by name, including two in Ocean County and one in Hudson County.
TOMS RIVER, NJ・2 DAYS AGO
CBS Baltimore

BALTIMORE (WJZ) — Baltimore Police released images Tuesday of seven people of interest in the fatal shooting of a Fells Point bouncer early Monday morning. Marco Nunez, the 30-year-old bouncer of Rodos Bar, was found with multiple gunshot wounds in the 1700 block of Thames Street around 1 a.m. Monday. He was pronounced dead at Johns Hopkins Hospital. Homicide detectives are looking to identify and question three men and four women pictured in a release: female 1a, BPD female 2, BPD female 3 and male 2, BPD female 4, BPD male 1, BPD male 2a, BPD male 3a, BPD Male 3b, BPD Baltimore Police urge anyone who recognizes the people to call detectives at (410) 396-2100. Governor Larry Hogan on Tuesday announced the state will match the Metro Crime Stoppers’ $8,000 reward for information in the slaying, doubling the reward to $16,000. Tips can be sent to Metro Crime Stoppers Maryland at 1-866-756-2587.
23 DAYS AGO
101.1. The Wiz