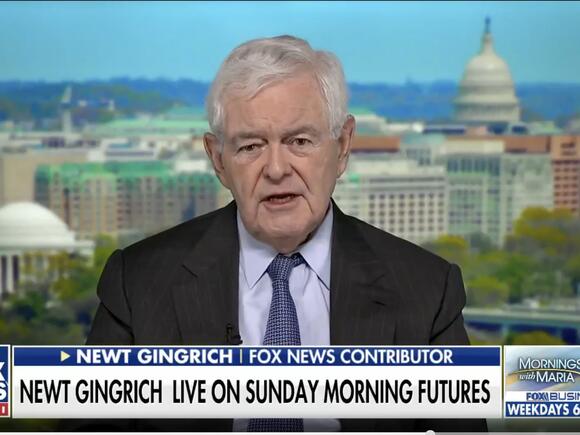 Former House Speaker Newt Gingrich's controversial weekend comment that the House January 6 Committee investigators could face jail time themselves if Republicans take over Congress came about two weeks after the panel subpoenaed his longtime former aide who also co-authored a book with him.

The select House committee investigating the US Capitol riot wants to speak with Ross Worthington, who worked in the Trump White House as an advisor for policy, strategy, and speechwriting.

In a January 10 letter to Worthington, the committee said that it believes he helped draft the January 6 speech Trump gave at the rally on the Ellipse in Washington before the lame duck president's supporters stormed the Capitol. The letter from Chairman Bennie Thompson, a Democrat from Mississippi, came with a subpoena that carries the force of law requiring Worthington's compliance.

Worthington served as a research director and lead writer for the media and communications firm Gingrich Productions before joining Trump's transition team that helped him prep for the White House in late 2016 and early 2017.

He also served as deputy communications director for Gingrich's unsuccessful 2012 presidential campaign and a year later they co-authored the book, " Breakout: Pioneers of the Future, Prison Guards of the Past, and the Epic Battle That Will Decide America's Fate ."

"This might be hitting a little close to home for Gingrich and he is upset that his colleague has to deal with the January 6th commission," one former Republican leadership staffer told Insider in an email when asked about the connection between Gingrich and the Worthington subpoena.

On Fox News, Gingrich unleashed on Sunday on the committee and Attorney General Merrick Garland for acting like a "lynch mob" in their pursuit of "innocent people." He also warned that when Republicans win majorities in Congress the January 6 investigators are "going to I think face a real risk of jail for the kind of laws they're breaking."

Rep. Liz Cheney, a Republican from Wyoming who serves on the House's January 6 committee, swung back at Gingrich. "This is what it looks like when the rule of law unravels," she wrote on Twitter.

The House committee issued Worthington a subpoena compelling him to provide documents by January 24 and to appear for a deposition on February 2. Committee staff said they had no updates on the status of his response.

A federal grand jury has already indicted Trump's former senior aide Stephen Bannon on contempt charges for refusing to provide information to the committee. He has pleaded not guilty and faces a July trial in Washington.

Warren Rojas and Kimberly Leonard contributed to this report.

well these republican politicians who were involve in 01/01 will be brought to justice by the DOJ regardless if they win back majority. It has been proven that there is a reason beyond doubt that there was crimes committed leading up to 01/06. So good luck with your majority GOP

Newt has very low knowledge, the congress and senate have no power to put 1/6 committees in jail if republicans gain power in 2022 only DOJ does and DOJ is assigned by Biden….Trump and allies will be in jail soon

A Political Scientist responded that there is always a logical explanation, for the Batxxxx things Newt Gingrich states.

"It would concern me," Gates told CBS News in an interview regarding former President Trump pursuing the White House again. "That's where I am."
PRESIDENTIAL ELECTION・2 DAYS AGO

When President Joe Biden named Kamala Harris as his running mate, he promised his former campaign rival would be one of the most influential voices in the White House.
PRESIDENTIAL ELECTION・29 DAYS AGO
ohmymag.co.uk

Vladimir Putin’s girlfriend, Alina Kabaeva, has made a rare appearance for her annual 'Alina Festival' on Saturday at Moscow’s VTB Arena, putting rumours that she was hiding in a Swiss chalet or a Siberian bunker to rest. A rhythmic gymnastics festival. Her presence at the patriotic rhythmic gymnastics...
EUROPE・29 DAYS AGO
Business Insider

The poll also found that 44% of Republic voters want congressional candidates to focus on the 2020 presidential election.
PRESIDENTIAL ELECTION・21 HOURS AGO

"This should never have been allowed to occur to my colleague," Representative Matt Gaetz said about the legal challenge seeking to disqualify Greene.
GEORGIA STATE・29 DAYS AGO
Fox News

In the latest set of text messages between the Fox News host and Trump's former chief of staff, Meadows told Hannity to "Stress every vote matters."
PRESIDENTIAL ELECTION・29 DAYS AGO

The Utah senator also said the West could confront Russian-allied nations with an ultimatum: "You are either with us, or you are with Russia."
CONGRESS & COURTS・3 DAYS AGO
Business Insider

Raffensperger, who Trump unsuccessfully pressured to "find" him 11,780 votes in the 2020 election, secured the nomination for another term.
GEORGIA STATE・1 HOUR AGO
Business Insider

Viktor Yushchenko says Putin has become a "completely isolated and brutal despot who cannot stand any opposition."
POLITICS・29 DAYS AGO