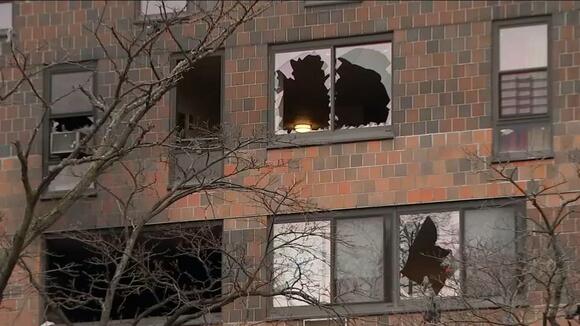 On the heels of horrific Bronx fire that killed 17 people, including eight children, Senator Charles Schumer and Congressman Ritchie Torres on Tuesday unveiled a "4-point federal fire safety package" that includes addressing sprinklers, self-closing doors, heaters and federal investigation powers. Schumer and Torres said they intend to advance and pass the plan through both chambers of Congress, and that more can -- and must be done to make vulnerable buildings across city, state and nation safer for all. Each priority covered in the bill is critical to making sure residents are protected, the said, adding that while their offices work with impacted families, systemic reforms are needed to a variety of dwellings stuck in the past, or ones that simply lack a culture of safety made worse by neglect. RELATED | Rapper Fat Joe holds fundraiser for families of Bronx fire victims

Fat Joe hosted a fundraiser on Hot 97 and sister station WBLS 107.5 for families of the 17 victims who died in the Bronx apartment fire January 9.

Lawmakers backing the plan say the measure is needed in order to address fire safety issues that have been heightened due to neglect. Schumer and Torres said the federal government can, and should, lead the way here in preventing these tragedies and doing the hard work of changing the law. In the fire's wake, Torres formed the "Bronx Task Force on Fire Safety" that a few weeks ago announced the first legislative and policy recommendations to address the conditions that led to the deadly fire at Twin Parks North West. Torres said he would focus the first policies on space heaters and self closing doors, including introducing legislation to mandate shutoff feathers on space heaters and requiring self-closing apartment doors in all housing developments that receive federal funding. Torres is also examining local compliance with the recently passed city law mandating self-closing doors in residential buildings. "Something as simple as a self-closing door can prevent mass causalities in a fire," Torres said. "And so we are going to propose legislation that would require every federally funded housing development, such as Twin Parks North West, to have self-closing doors. And we will require that landlords periodically inspect those self-closing doors and certify under oath, under the penalty of perjury that the self-closing doors are in fact closing properly." He also says heat sensors could be installed in housing developments to ensure that temperatures are not so cold that residents are forced to use space heaters. Those and other proposals will "reflect the lessons learned" from the fire. ALSO READ | How you can help families affected by Bronx fire

Chantee Lans reports on how to help the victims of the Bronx fire.

COVID isn't over. One example is the fact that some 20 New York City judges are now COVID positive after they attended a retreat in Montauk last weekend, according to published reports.
NEW YORK CITY, NY・56 MINUTES AGO
ABCNY

In the wake of the horrific grocery store shooting in Buffalo, Governor Kathy Hochul outlined new proposals in an effort to stop dangerous individuals from getting deadly weapons.
1 DAY AGO
ABCNY

Happy the elephant has lived at the Bronx Zoo for 45 years, but the New York State Court of Appeals will now decide if she is a person.
NEW YORK CITY, NY・10 HOURS AGO

While still not at pre-pandemic levels, subway ridership continues to set new high watermarks in the push to return to normalcy.
NEW YORK CITY, NY・3 HOURS AGO
ABCNY

This week's MTA heroes are the workers who are responsible for helping us all navigate the city's transit system.
NEW YORK CITY, NY・1 DAY AGO
ABCNY

President Joe Biden is helping baby formula manufacturers and major retailers with logistic support to get formula into the country, according to a White House official, and also attempting to identify areas where communities may be at "critically low supply."
SUFFOLK COUNTY, NY・1 DAY AGO
ABCNY

Transport Workers Union Local 100 officials said bus operators are tired of being treated like punching bags, and they detailed the changes they want during the event outside the Kingsbridge Bus Depot in Inwood.
NEW YORK CITY, NY・1 DAY AGO
ABCNY

The arrests were part of Operation Long Island Wave, and those arrested were wanted for offenses including homicide, attempted murder, narcotics, weapons offenses, robbery and assault.
LAW ENFORCEMENT・1 HOUR AGO

New York City is preparing to honor the late rapper Christopher Wallace, better known as Biggie Smalls and the Notorious B.I.G., who would have turned 50 on May 21.
BROOKLYN, NY・10 HOURS AGO
ABCNY

A 20-year-old was shot in face and killed after meeting with alleged motorcycle sellers under the Deegan Expressway.
BRONX, NY・19 HOURS AGO
ABCNY

The Supreme Court is set to rule on a case that could transform the landscape of what guns are legally allowed to be carried in New York.
NEW YORK CITY, NY・2 DAYS AGO
ABCNY

For the second time this year, a Rockland County community has had to take action after a racist incident during a school sporting event.
PEARL RIVER, NY・4 HOURS AGO

Gas in New York is quickly approaching an average of $5 per gallon, increasing again Thursday to $4.91.
NEW YORK CITY, NY・24 MINUTES AGO
ABCNY

Two people were found dead in a burning car in the Bronx were both fatally shot, and a double murder investigation is now underway.
BRONX, NY・12 HOURS AGO
ABCNY

Mayor Eric Adams and other faith leaders held a vigil at Bethel Gospel Assembly Church in Harlem Monday evening honoring the victims of the attack.
2 DAYS AGO
ABCNY

Fire ripped through the same buildings back on October 8, 2021. One firefighter sustained minor injuries battling this morning's inferno.
BRONX, NY・1 DAY AGO