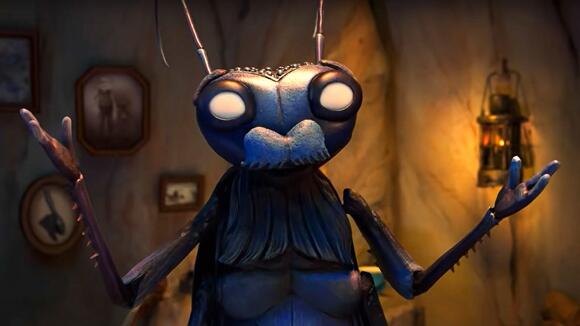 A new teaser for "Guillermo del Toro's Pinocchio," a stop-motion animated version of Carlo Collodi's children's tale, has been released.

Gregory Mann voices the titular wooden marionette who gets his magic wish to become a flesh-and-blood boy in the film from the visionary Oscar winner.

Guiding him along the way is Ewan McGregor's Sebastian J. Cricket.

MORE: One on one with 'Shape of Water' director

"It's a story you think you know, but you don't. Not really," Cricket chuckles.

MORE: Oscar nominee Richard Jenkins on 'The Shape of Water' and working with Sally Hawkins

The film debuts exclusively on Netflix in December of 2022.

Review: 'Operation Mincemeat' will jolt you with surprises you don't see coming

Sometimes a shamelessly retro wartime romance is all the escape you need.
MOVIES・9 DAYS AGO
GMA

Watch 1st trailer for 'She-Hulk: Attorney at Law' on Disney+

Review: Drop everything and see 'Everything Everywhere All at Once'

"Everything Everywhere All at Once" is an indie movie that has become a box office hit.
MOVIES・2 DAYS AGO
GMA

Zac Efron revealed if he would have any interest in a "High School Musical" reboot.
CELEBRITIES・9 DAYS AGO

Leah Jeffries received support from Alexandra Daddario and Rick Riordan after her casting in the upcoming "Percy Jackson" series on Disney+ sparked backlash from fans.
CELEBRITIES・9 DAYS AGO
GMA

Jon M. Chu reflects on his path to making films on his cultural identity

Jon M. Chu discussed directing films that centered on his own experiences.
MOVIES・9 DAYS AGO
GMA

Ariana Grande talks preparation for 'Wicked': 'I am spending all my time with Glinda'

Ariana Grande recently shared that she won't be releasing new music any time soon because she is prioritizing preparation for "Wicked."
CELEBRITIES・5 DAYS AGO
GMA

Hulu drops 'Only Murders in the Building' season 2 trailer

The season 2 trailer for Hulu's "Only Murders in the Building," starring Selena Gomez, Steve Martin and Martin Short, is finally here.
TV SERIES・3 DAYS AGO

Reba McEntire is set to appear on the third season of the ABC series "Big Sky."
TV & VIDEOS・4 DAYS AGO
The Guardian

The week in theatre: The House of Shades; My Fair Lady; The Breach

Anne-Marie Duff’s aspiring singer transfixes in a didactic family saga; My Fair Lady feels strangely vacant. Plus, a stifling tale of dysfunctional siblings. Intensity is too pale a word for Anne-Marie Duff. It implies something more deliberate than her full-on flaring, and something more solemn than the caustic crackle of her voice. In The House of Shades, Duff snakes into a turquoise cocktail dress to sing I’m Always Chasing Rainbows (and made me long to hear her as Little Voice), slinks into impressions of Bette Davis, snarls – “mardy mustard” as she says of someone else – into disappointment. She does and says monstrous things; she is always magnetic. From time to time she clicks her fingers in the air as if to summon up the next phase of her life.
ENTERTAINMENT・1 HOUR AGO
GMA

Lizzo expresses desire to star in a Broadway musical: Watch the video

Lizzo shared a TikTok video of her singing a song from "Moulin Rouge! The Musical" and expressed her desire to star on Broadway.
BEHIND VIRAL VIDEOS・4 DAYS AGO
GMA

Vin Diesel shared a video of him and Jason Momoa goofing off on the set of "Fast X."
MOVIES・2 DAYS AGO

New Elton John documentary coming to Disney+: All the details

A new documentary, "Goodbye Yellow Brick Road: The Final Elton John Performances And The Years That Made His Legend," is heading to Disney+.
MOVIES・2 DAYS AGO