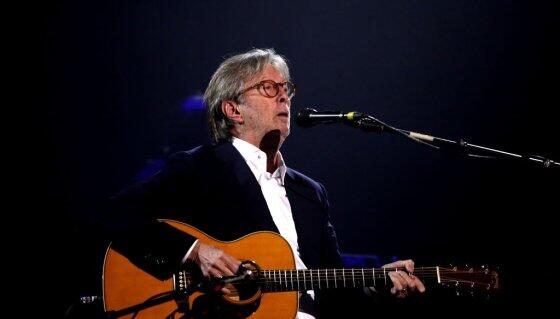 Eric Clapton might have a number of awards and honors that signify a successful musical career, but he’s transformed himself into somewhat of an anti-vaxxer crusader in recent times. The famed guitarist essentially stated during a recent interview that COVID-19 vaccine recipients are under a form of mass hypnosis.

Clapton, 76, was a guest on The Real Music Observer YouTube show with host Dave “Harmless Dave” Spuria last week, and the pair went through some talking points that directly linked to Clapton’s history of railing against COVID-19 shutdowns and the subsequent lockdowns along with bringing up his usual stance. When the talk began, Clapton shared that he’d become sick with what he referred to as “the thing” which could be assumed to be COVID-19. From there, the discussion stayed centrally focused on his views before leading into the hypnosis portion.

Van Morrison and Clapton released a pair of songs sharing their opposition to COVID-10 restrictions titled “Stand and Deliver” and “This Has Gotta Stop,” tracks that were applauded by the anti-vaxxer community but, according to Clapton, derailed his career in some respects. From there, the discussion stayed centrally focused on his views before leading into the hypnosis portion.

“I started to realize there was really a memo, and a guy, Mattias Desmet, talked about it,” Clapton said, this after explaining that he was tricked into getting a vaccine due to mass advertising for the vaccine. “And it’s great. The theory of mass formation hypnosis. And I could see it then. Once I kind of started to look for it, I saw it everywhere.”

Mattias Desmet, a professor of clinical psychology at Ghent University in Belgium, is said to have coined the theory of mass formation hypnosis, which many conspiracy theorists against vaccines allege as being true, according to the New York Post .

Even talented people can be delusional, in fact they’re the ones more likely to be!!!

I think the other way around. The folks that are anti vaccines, are the ones under hypnosis 🤷🏽‍♀️🤣

RAY Liotta, the brilliant actor who made his name in Martin Scorsese's crime classic Goodfellas, has passed away. The star died in his sleep in the Dominican Republic, where he was filming Dangerous Waters, according to Deadline. There were no signs of foul play or anything suspicious about the death,...
CELEBRITIES・22 HOURS AGO
Hello Magazine

Kevin Bacon's City on a Hill co-star Marnie Schulenburg has tragically passed away from cancer at the age of 37. The Hollywood star worked alongside Marnie in the Showtime program, with her death being announced last week. The actress left behind her husband Zack Robidas and the couple's two-year-old daughter...
CELEBRITIES・3 DAYS AGO
HipHopWired

Fat Joe is now a much wiser Fat Joe. The Don has admitted he was wrong by beefing with Jay-Z and the Roc-A-Fella Records crew. As per Hype Beast you can always count on the South Bronx native for a great interview. In his latest Q&A he sat down with Math Hoffa and crew on the My […]
CELEBRITIES・20 HOURS AGO
HipHopWired

The cause of the untimely death of YSL rapper Lil Keed still hasn’t been determined, but details are coming to light surrounding his health. The Atlanta rapper was reportedly suffering from stomach pain severe enough that it sent him to the hospital before his untimely passing. As previously reported, Keed died late last week, with […] The post YSL Rapper Lil Keed Suffered From Severe Stomach Pain Before Death appeared first on The Latest Hip-Hop News, Music and Media | Hip-Hop Wired.
ATLANTA, GA・10 DAYS AGO

For a while now Swizz Beatz has been keeping himself busy setting up Verzuz battles for the culture (dropped the ball on that last one though), so if any artist is lucky enough to get some music from the Hip-Hop legend you know he gonna deliver. Blessing $kinny with some new work, Swizz Beatz and […] The post $kinny, Swizz Beatz & French Montana “Salam,” Beanie Man “Blessings Pon Blessings” & More | Daily Visuals 5.17.22 appeared first on The Latest Hip-Hop News, Music and Media | Hip-Hop Wired.
MUSIC・9 DAYS AGO
HipHopWired

MF DOOM Biography In The Works From Veteran Music Journalist

The late Daniel Dumile was something of an enigma, and a new biography hopes to partially lift the veil of the "Supervillain."
CELEBRITIES・7 DAYS AGO
HipHopWired

The enigmatic, extended and elusive path toward the release of Kanye West’s 11th album, DONDA 2, continues. The announcement of a new soundtrack tied to the documentary on late rapper XXXTentacion includes a song that features Kanye West and is scheduled to be on the “proper” release of the aforementioned, mythical album.   YE & […]
CELEBRITIES・3 DAYS AGO
HipHopWired

Cardi B Shares How To Change Diapers With Long Nails, Even Non-Parents Are Intrigued

Cardi B continues to hold the culture in the palm of her hands. Kash Doll was curious to know how she changes diapers with her signature nails and she was happy to oblige. As per Buzz Feed the South Bronx bombshell is the talk of Twitter once again. Earlier this week her peer Kash Doll asked […]
CELEBRITIES・7 DAYS AGO
HipHopWired

Fans of Rapper P can now rejoice after it was announced that Prodigy's solo catalog will make a return to streaming services.
ENTERTAINMENT・6 DAYS AGO
HipHopWired

On Saturday (May 15), the iconic clique reconnected for the Lovers & Friends music festival in Las Vegas, where Lauryn Hill was headlining, but it was backstage that went viral after Wyclef, Lauryn Hill, Pras, Rah Digga, Young Zee, Pace Won, and Forté was filmed
LAS VEGAS, NV・7 DAYS AGO
HipHopWired

The film had previously been seen by fans at the 2021 American Black Film Festival where it won the Narrative Feature Fan Favorite Award.
NEW YORK CITY, NY・19 HOURS AGO

Bad Bunny is to Reggaeton what Jay-Z was to Hip-Hop in the early 00’s and now everyone outside the Latin community is taking notice of that as Variety is reporting that the current King of Reggaeton (sorry J. Balvin) is out here making history with his latest album. According to the report, Bad Bunny’s fourth […]
MUSIC・4 DAYS AGO
HipHopWired

We feel like many women would love it if they could keep Idris Elba in a bottle all to themselves but imagine the man was able to grant you three wishes as well. Women would go crazy. That seems to be the premise for George Miller’s latest film, Three Thousand Years Of Longing starring Tilda […]
MOVIES・3 DAYS AGO