Until further notice, Moritz Seider is the NHL's Rookie of the Year 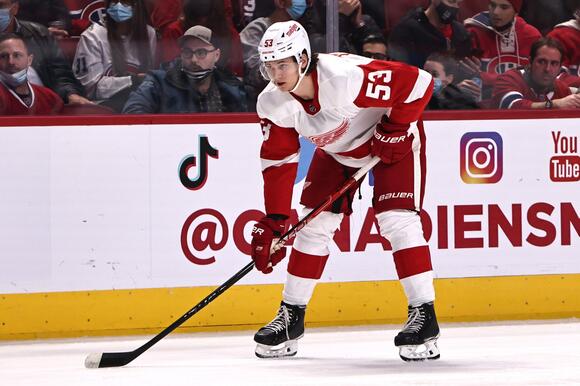 It's true, Trevor Zegras has dazzled the NHL in his (second) rookie season with the Ducks. Also true: he continues to trail Moritz Seider and Lucas Raymond in the race for Rookie of the Year. The race is far from over, but Detroit's dynamic duo is positioned 1-2 at the halfway mark.

Or at least it should be.

According to a panel of 16 voters from NHL.com , Zegras has already taken the lead. He garnered 67 voting points in a poll released Monday, compared to 62 for Seider and 59 for Raymond. (Zegras and Seider were tied with seven first-place votes apiece.)

A reminder that Zegras is the rookie leader in exactly zero offensive categories.

Raymond ranks first in goals and points; Zegras is second in both. Seider ranks first in assists; Zegras is third. And not to diminish a young star, but a reminder, for whatever it's still worth, that Zegras is minus-11. A reminder that he was two games shy of exhausting his rookie eligibility last season. Seider and Raymond, on the other hand, have learned to swim in the deep end.

It's true, Zegras provided one of the highlights of the season with his alley-oop assist to Sony Milano. The over-the-net lob pass has become its own art form. And it's true, he's closed the gap on Seider and Raymond with 16 points in his last 17 games. He and Raymond are now tied for first among rookies in points per game.

Also true: Raymond has a hat trick and a four-point game to his name. Zegras has neither. And have we forgotten Raymond's assist on a cross-ice lob pass to Dylan Larkin? How about his other assist to Larkin, the no-look, between-the-legs backhand that also split the legs of a defender? If we're awarding style points to Zegras -- and I'm all for it -- Raymond has earned some, too.

All that said, this is Seider's award to lose. The jump to the NHL is generally hardest on defensemen. Seider has played north of 22 minutes a night against the opposition's top players and made it look easy. He's excelling in a role where his peers would be exposed. It's almost boring to compare Seider to other rookies. In more than a few games this season, the 20-year-old has been the best player on the ice.

Seider's poise continually belies his age. He does not back down. He does not panic. He doesn't even seem to tire. He's a smooth skater with long, easy strides and a bulldozer with his 6'4 frame. He's a smart passer. Seider isn't just first among rookies with 23 assists. He's 11th among all defensemen, tied with a Norris Trophy favorite by the name of Cale Makar. Style points? How bout a game-winning OT snipe ? How bout two ?

Nicklas Lidstrom, the Hall of Famer with seven Norris Trophies, said earlier this season that Seider is better than he was at the same age. I'll take Lidstrom at his word, and Seider hasn't given us any reason to doubt him. He patrols the blueline like a vet. He's standing up to the NHL's best players like he's been staring them down for years. And he's on pace to tie Quinn Hughes for the most assists by a rookie defenseman since, yep, Lidstrom in 1991-92.

Lidstrom put up 60 points that season but finished second for Rookie of the Year to the dazzling Pavel Bure. Seider, in a far more challenging offensive era, is on pace for 50 points. Raymond and Zegras have dazzled, no doubt. But Seider has defended, dazing some of the best players on the planet while also dishing out assists. Unless that changes, he deserves the award that eluded Lidstrom.