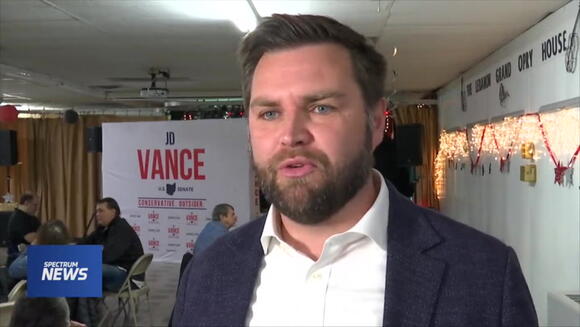 Hillbilly Ellegy author and US Senate candidate JD Vance was asked in an interview this weekend about his tweet calling for Donald Trump ’s Twitter account to be reinstated after actor Alec Baldwin was involved in a fatal shooting.

Mr Baldwin was involved in an incident last year during the filming of the movie Rust in which a gun in his hand fired and a round struck the film’s director of photography, Halyna Hutchins , killing her. The film’s director was also hit, but not fatally, and the incident is now under investigation.

The former president was banned from both Twitter and Facebook earlier in 2021 after making numerous false claims and sharing outright conspiracies about the 2020 election; his supporters then attacked the US Capitol on 6 January in an attempt to thwart the US Senate’s certification of Joe Biden’s victory.

Mr Vance defended his remarks as a lighthearted reference to what Mr Trump, whose Twitter presence was infamous long before the 2020 election, would have said about the incident involving Mr Baldwin, one of his top political rivals in Hollywood.

“Look, people may not always agree with my rhetoric, but I think unfortunately, our country’s kind of a joke. And we should be able to tell jokes about it. Right?” he told Spectrum News.

“Every single person that I knew was joking about what would Donald Trump say if he was on Twitter. Right?” Mr Vance added. “So I think the idea that we can’t have somewhat offensive humor sometimes from our politicians is basically just asking us to have fake politicians all the time. That’s not what I’m going to be.”

The GOP hopeful’s remarks came on Sunday, a day before he received the endorsement of Rep Marjorie Taylor Greene in the Ohio Senate race. Ms Greene is one of the furthest-right members of the House and a frequent espouser of false claims about the 2020 election as well as Covid-19 and vaccines.

"JD Vance is the conservative warrior that the entire America First movement needs fighting for us in the US Senate, and that’s why I’m proud to endorse him,” she told Fox News on Monday.

Mr Vance is currently trailing Josh Mandel, the race’s frontrunner, and several other candidates according to some polling of the race but all eyes remain on the impending endorsement of former President Donald Trump, who has been eyeing the key Senate race for months and waiting to exercise his power as GOP kingmaker over the field.

The Ohio Senate race is one of the most important in the US for both parties in 2020 as they battle for control of the currently 50-50 Senate, which remains under Democratic control thanks to the tiebreaking vote of Vice President Kamala Harris. The state voted twice for Donald Trump in 2016 and 2020, but has one Democratic senator and the retirement of Mr Portman means that the party has a real shot at picking up the second seat.

Greene testified on Friday that she didn't recall whether she asked Trump to invoke military rule, despite telling Meadows to relay the idea to Trump.
ATLANTA, GA・24 DAYS AGO
Salon

Rep. Marjorie Taylor Greene (R-GA) speaks to supporters of former U.S. President Donald Trump at the Banks County Dragway on March 26, 2022 in Commerce, Georgia. This event is a part of Trump's Save America Tour around the United States. (Megan Varner/Getty Images) On Monday, CNN's Andrew Kaczynski and Em...
COMMERCE, GA・23 DAYS AGO
The Independent

Patricia Arquette has angrily confronted Elon Musk after he revealed his plans to vote Republican.Writing on Twitter earlier today (18 May), Musk explained that he has switched allegiance from Democrat as they have become a party of “division and hate”.He wrote: “In the past I voted Democrat, because they were (mostly) the kindness party. But they have become the party of division & hate, so I can no longer support them and will vote Republican. Now, watch their dirty tricks campaign against me unfold.”To this statement actor Arquette responded: “You say this with a straight face as Republicans roll...
CELEBRITIES・1 DAY AGO

In the latest set of text messages between the Fox News host and Trump's former chief of staff, Meadows told Hannity to "Stress every vote matters."
PRESIDENTIAL ELECTION・24 DAYS AGO
Fox News

Defeated Pennsylvania Senate candidate Kathy Barnette has placed blame for her third-place finish in Tuesday’s Republican primary squarely on the shoulders of Fox News host Sean Hannity. In a video posted to her Twitter account early on Wednesday morning, Ms Barnette thanked her supporters, but pivoted to attacking the Fox commentator.“I do want to say: never forget what Sean Hannity did in this race. Almost single-handedly, Sean Hannity sowed seeds of disinformation, flat-out lies every night for the past five days. And that was just extremely hard to overcome, apparently”.Ms Barnette’s grievance with Hannity stems from his decision to...
PENNSYLVANIA STATE・1 DAY AGO

The former president referenced scoring well on a cognitive test in 2018, which is designed to detect whether a person has early stages of dementia.
DELAWARE COUNTY, OH・25 DAYS AGO
HuffPost

In a surprise to no one, Kimmel devoted much of his opening monologue on Monday’s “Jimmy Kimmel Live!” to roasting Marjorie Taylor Greene after the far-right congresswoman testified last week in a Georgia court about her role in the Jan. 6 Capitol riot. Kimmel — who was...
WASHINGTON, DC・23 DAYS AGO
USA TODAY

Piers Morgan’s new show Uncensored aired on for the first time on TalkTV today (25 April), with a special introduction from comedian Ricky Gervais. In the surprise cameo ahead of the British broadcaster’s highly publicised Donald Trump interview, Gervais appeared briefly to wish Morgan “good luck” with his new series, which Morgan promises will “cancel cancel culture”.In the video Gervais said: “The producers of Piers Morgan’s new show contacted me and asked me if I’d like to be a guest. I said, ‘Definitely not.’”He added: “They said would you mind doing a quick video wishing him luck? I said,...
CELEBRITIES・24 DAYS AGO
The Independent

An abortion care provider pushed back on questions from a Republican congressman when she was asked about whether she would ever abort a foetus that was halfway through the birth canal.The questioning took place during a House Judiciary Committee hearing focusing on how abortion rights are at risk. The hearing came after Politico reported a leaked Supreme Court draft opinion overturning Roe v Wade, the 1973 Supreme Court ruling that enshrined the right of women to seek an abortion.Representative Mike Johnson of Louisiana asked Dr Yashica Robinson, an obstetrician-gynecologist based in Huntsville, Alabama, whether she supports the right of...
HUNTSVILLE, AL・1 DAY AGO
Fox News

Co-host of “Outnumbered” and former White House Press Secretary Kayleigh McEnany joins Fox Across America With Jimmy Failla to share her thoughts on the hysteria by some Democrats and members of the mainstream media over Tesla CEO Elon Musk acquiring Twitter. “They don’t they don’t fear Twitter becoming...
INTERNET・23 DAYS AGO
The Independent

Nancy Pelosi sharply rebuked her Republican rivals on Thursday at her weekly press conference and challenged Republicans to a national debate over the issue of providing funding to address a critical shortage of baby formula.Speaking to reporters, she questioned why Republicans opposed a funding bill passed by the House this week that would provide $28m to address the shortage and give the Food and Drug Administration (FDA) resources to try and prevent future issues in the market.“What's the objection? That we don't want to spend money on babies who are crying for food? Ok, let's have that debate,” she...
CONGRESS & COURTS・3 HOURS AGO
The Independent

On Tuesday evening I was asked, firmly but politely, by the Hendersonville police department to leave the premises of a small auto detailer and tire shop.But this was no ordinary auto detailer and tire shop: It was the home of the final (?) flameout of freshman Rep. Madison Cawthorn, who had just lost his primary in a stunning night, that didn’t even extend — as some analysts might have expected — to a June runoff election. Thanks to a resounding showing by Cawthorn’s main rival, state Sen. Chuck Edwards, it was all over for Cawthorn. It wasn’t explicitly mentioned, but...
HENDERSONVILLE, NC・54 MINUTES AGO
The Independent

Despite outcry from their elected officials in recent days, nearly half of Republican voters believe that the United States should provide baby formula to non-citizens at the country’s southern border. Republican lawmakers and right wing pundits have lashed out at President Joe Biden this week for continuing to provide formula to babies coming to the country with their families amid a nationwide shortage, with several conservative leaders referencing the alleged prioritization of “illegal babies” and “illegal mothers.” GOP voters, however, are not exactly rallying around the nativist attacks on migrant mothers and their babies. A new poll from YouGov conducted...
U.S. POLITICS・2 HOURS AGO
The Independent

The House select committee investigating the 6 January 2021 attack on the Capitol appears to have obtained evidence showing at least one Republican member gave an unauthorised tour on the day before a mob of former president Donald Trump’s supporters stormed the building.In a letter to Georgia Representative Barry Loudermilk, select committee chairman Bennie Thompson and vice-chair Liz Cheney informed Mr Loudermilk, a Georgia Republican, said that the nine-member panel has obtained information regarding a tour he allegedly led on the eve of the worst attack on the Capitol since Major General Robert Ross ordered British troops to set it...
GEORGIA STATE・1 HOUR AGO
The Independent

Alexandria Ocasio-Cortez has confirmed reports that she is engaged to her partner Riley Roberts.On Thursday, it was reported on Twitter that the congresswoman had gotten engaged to her longtime boyfriend, with reporter Pablo Manríquez tweeting: “BREAKING: @AOC got engaged!!”Ms Ocasio-Cortez confirmed the news in a tweet, with the New York Democrat retweeting a report about the engagement and writing: “It’s true! Thank you all for the well wishes.” The couple first met when they were students at Boston University. While they maintain a mostly private relationship, Ms Ocasio-Cortez previously described the web developer as an “easy-going redhead” in a 2018...
RELATIONSHIPS・2 HOURS AGO