Frozen vegetables are just as good as fresh. Why do we still stick our noses up at it? 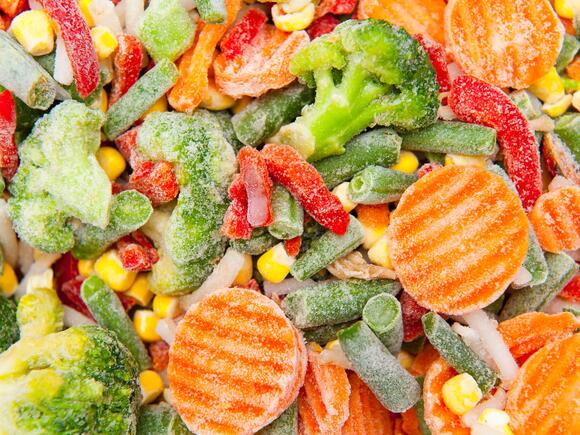 Britain has a strange relationship with frozen food . Despite evidence showing that plenty of frozen fruit and vegetables retain their nutritional value – sometimes even better than fresh produce – there seems to be a prevailing attitude that frozen food is just not as good as fresh.

Home cooks such as Delia Smith , Nigella Lawson, and Jack Monroe have long hailed the practicality and usefulness of frozen vegetables at hand. However, Smith’s 2008 cookbook, titled How To Cheat At Cooking , drew intense backlash because she recommended ingredients like frozen potatoes and tinned mince.

Chefs such as Raymond Blanc criticised the TV cook for her audacity in suggesting the public use produce that had been packaged and preserved for longevity. At the time, he told The Daily Express : “Suddenly the great lady who helped us all to connect with our food has published a book which undermines her credibility.”

But the Michelin-starred Blanc appears to have now changed his tune. In an interview with the Radio Times , the French chef praised Smith for being the first TV chef to “really simplify food”.

Take the frozen pea. First, it’s delicious – all the nutrients are trapped in

Blanc said: “[Smith] was heavily criticised for using tinned and frozen food in her recipes, but she was absolutely right.

“Take the frozen pea. First, it’s delicious – all the nutrients are trapped in. Not quite as good as fresh, but nobody wants to pick and pod peas. If it takes two hours, you’re not going to want to eat it.”

Anna Mapson, a nutritional therapist and founder of Goodness Me Nutrition , tells The Independent that in general, frozen food is just as good as fresh food, and at times, can have an even higher nutritional value.

She points out that a lot of fresh produce is flown into the UK from all around the world, and then stored for weeks at a time before it even reaches the supermarket shelves.

“A lot of fruit and vegetables we see in supermarkets are not really as fresh as we think,” Mapson says. “But when frozen, vegetables do retain a lot of goodness because they are frozen in time.”

However, the majority of Britons still idealise fresh produce. A 2020 YouGov survey found that the majority (64 per cent) of Britons “definitely” or “tend to agree” with the statement “fresh food is better than frozen”, while only three per cent said they “definitely disagree”.

The survey found that among those who prefer frozen foods, 68 per cent said it offers better value for money compared to fresh food. This reflects the significant difference in pricing between the two categories – for example, Which? found that in 2020, consumers spent around £1.57 per kilo of fresh broccoli compared to just 86p for frozen.

But despite the cost-efficacy and high nutritional value of frozen food, it’s still considered less good compared to fresh food – and this prevailing attitude boils down to wealth inequality.

When you are on a budget, frozen food can be really beneficial

Because fresh food is significantly more expensive than frozen, it is mainly purchased by higher income households. A study by the University of Cambridge that tracked the price of 94 key food and beverage products between 2002 and 2012 found that fresh fruit, meat and vegetables, which were considered “healthy foods”, were three times more expensive per calorie than less healthy products.

The researchers found that a quarter (25 per cent) of people said they felt that healthy and nutritious food was unaffordable in the UK. This figure rises among individuals with incomes lower than £20,000 and £10,000 to 27 per cent and 44 per cent respectively.

This means that frozen foods, largely purchased by lower income households looking to stock their freezers with food that is less likely to go bad before they get a chance to use it, have been relegated to the “unhealthy” foods camp.

Mapson says: “When you are on a budget, frozen food can be really beneficial, but the attitude of looking down on frozen foods may come from the other types of frozen food you can get.

“Plain fruit and vegetables with no additives are just as nutritious as fresh, but there are a lot of processed frozen foods like pizza or oven chips that people associate with being unhealthy.”

There is also a pervasive wellness culture that heralds perfect-looking fresh food as being better than anything else that feeds the view that frozen food is not as good.

That culture of everything being perfect, almost putting food on a pedestal, is actually quite unhealthy

Mapson says: “That culture of everything being perfect, almost putting food on a pedestal, is actually quite unhealthy.

“It’s all over social media and is about everything being clean, eat everything fresh – which of course would be great, but it’s not manageable for a lot of people. In the grand scheme of things, making sure you’re hitting your five a day and getting enough fibre can be met through frozen food.”

But things are changing, and not necessarily because Britons are starting to realise that many frozen foods are just as good as fresh. A combination of the Covid-19 crisis, inflation at its highest level for more than a decade and rising gas prices has pushed hundreds of thousands of people into poverty , while an increasing number of people are struggling with higher prices.

So as the nation grapples with stagnant wages and rising living costs, some Britons might just have to cast their snobbery aside and welcome more frozen food into their freezers – and, hopefully, develop more empathy for those who have relied on frozen food all along.

We here at PopCulture.com have a fairly constant finger on the pulse when it comes to food recalls. Whether on their own volition or by government order, companies regularly pull items for serious risks such as failure to disclose allergens, foreign matter contamination or salmonella risks. However, this just-issued hot dog recall has reasoning one we rarely see.
FOOD SAFETY・3 DAYS AGO
The Independent

Heinz launches ‘houmouz’ - hummus made from beans instead of chickpeas

Heinz has launched a Heinz Beanz hummus, made from the brand’s haricot beans instead of chickpeas.The appropriately named Houmouz is available in three different flavours; roasted butternut squash, chipotle chilli and original.The dip is already on sale at Ocado, and is priced at £2 a pot.The humouz is made from haricot beans which have been blended with roasted tomatoes, sesami tahini and olive oil, before it is seasoned with lemon juice, garlic, cumin and more tomato.The chipotle chilli version sees haricot beans blended with roasted sweet peppers and cayenne pepper. The butternut squash flavour also adds roasted butternut squash, rosemary...
FOOD & DRINKS・1 HOUR AGO
The Independent

Platinum Jubilee: All the food and drink deals over the bank holiday weekend

As Britons prepare to spend the four-day platinum jubilee weekend marking the Queen’s 70th year on the throne, restaurants, supermarket and food delivery services have launched special deals and discounts to help the nation celebrate.Queen Elizabeth II is the first British monarch to reach such a historic milestone, seven decades after she ascended the throne on 6 February 1952.The extended bank holiday weekend, which starts on Thursday 2 June to Sunday 5 June, will see all four UK nations holding a series of big events to commemorate the occasion, from Trooping the Colour to a Platinum Party at the Palace...
FOOD & DRINKS・1 HOUR AGO
The Guardian

The exponential increase in saltwater crocodile populations in the Northern Territory in recent decades may be partly a result of them preying on feral pigs, new research suggests. Scientists who have analysed the diets of saltwater crocodiles in the Territory believe the reptiles have shifted from marine prey to predominantly...
ANIMALS・28 DAYS AGO

Walking at a brisk pace for just 75 minutes every week could cut your risk of depression, a new study finds. The World Health Organization recommends everyone should exercise for at least two-and-a-half hours every seven days. But researchers at Cambridge University, England, found adults who got half as much...
FITNESS・29 DAYS AGO
SheKnows

Click here to read the full article. Khloé Kardashian’s perfectly curated kitchen pantry (read: grocery store) is a slice of organized, structured Heaven that puts even the best kitchen storage solutions to shame. And if you’ve ever caught a glimpse of her color-coordinated fridge (and her urge to keep everything super neat and tidy inside it), the immaculate state of her pantry really should come as no surprise. Luckily for us, we can recreate some of the organizational magic with Aldi’s new glass storage containers. View this post on Instagram A post shared by Aldi Connoisseur 🌈 (@aldi.is.my.jam) Aldi fan account,...
CELEBRITIES・28 DAYS AGO
Newsweek

"This is very concerning," wrote one commenter. "It's so much bigger than mac and cheese."
INTERNET・28 DAYS AGO
The Independent

Asma Khan: ‘As an immigrant, I want everyone to know you cannot eat my food if you don’t also take me’

Asma Khan almost didn’t make it to her talk at the Santa Fe Literary Festival. The decorated chef and cookbook author set up a café in a Yazidi refugee camp in Iraq in 2019, offering training to girls who had been sold into slavery by Isis. It was an audacious thing to attempt, unusual for a chef who had only recently starred in the Netflix series Chef’s Table and set up her own restaurant in central London. “I asked for volunteers for chefs and the only girl who put her hand up was a girl who stammered a lot,” Khan...
IMMIGRATION・2 DAYS AGO

Booze-fuelled partying into the early hours, wine time Friday, an altercation between staff, and a karaoke machine at the ready.These were among the shocking details of behaviour outlined in Sue Gray’s much-anticipated report giving an insight into what went on in Number 10 and the Cabinet Office during the Covid-19 lockdown.The 37-page report delves into 12 events, starting with a gathering in the Number 10 garden on May 15 2020 when Boris Johnson brought wine and cheese from his own flat, and ending with two get-togethers behind the famous black door on April 16 2021, which was the eve of...
DRINKS・1 HOUR AGO