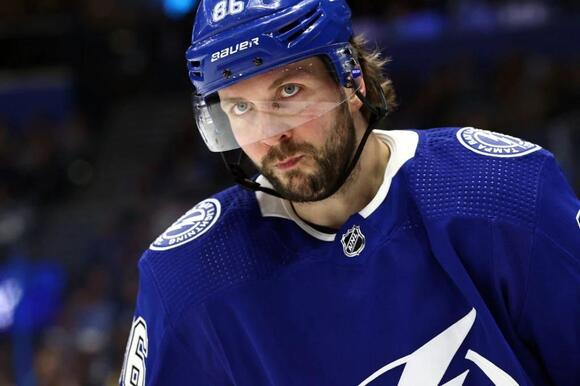 Kucherov has recorded 17 points (five goals, 12 assists) in 11 games this season for the Lightning (28-10-5, 61 points), who return to action on Thursday against the visiting New Jersey Devils.

The former Hart Trophy recipient returned earlier this month after missing 32 games with a lower-body injury.

Kucherov, 28, missed the 2020-21 regular season after hip surgery but returned with a flourish in the playoffs, recording 32 points (eight goals, 24 assists) in 23 games to help the Lightning repeat as Stanley Cup champions.

Kucherov won the Hart Memorial Trophy, Art Ross Trophy and Ted Lindsay Award in 2018-19 after scoring a career-high 41 goals and leading the league in assists (87) and points (128).

Nothing gets the people going quite like the Stanley Cup Playoffs. Find out how to live stream every NHL Playoff game here.
NHL・19 HOURS AGO
Sportsnaut

Gerard Gallant of the New York Rangers, Andrew Brunette of the Florida Panthers and Darryl Sutter of the Calgary Flames
NEW YORK CITY, NY・19 HOURS AGO