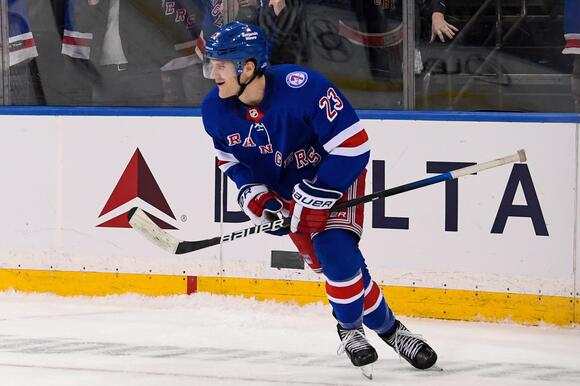 The Rangers missed an opportunity to make a statement against the Hurricanes last week, falling 6-3 to their top competition in the Metropolitan Division. But New York has rebounded with two straight wins since, including a 3-2 shootout victory over the Kings on Monday night.

The win for the Blueshirts put the team at 60 points on the season, the first team in their division to reach that mark, now three points ahead of Carolina for the division lead.

For the Rangers, the comeback victory on Monday wasn’t another attempted statement that they belong in the discussion of top tier teams in the NHL. Adam Fox says they’re leaving that for others to discuss.

“That’s kind of for media and outsiders to question,” Fox said after the sealing the win with a shootout goal “We have confidence in each other and know what team we are and what we can be, and the ultimate goal for us.

“We're just gonna come in and keep winning games and eventually people start not questioning every time we beat a team or win a game, but I think we just come in and try and take care of business and not let those outside factors really affect how we're going to play.”

Fox was called on for the shootout after it reached the sixth round, and beat Kings goalie Jonathan Quick with a top shelf backhand goal to erupt Madison Square Garden and give New York more of a cushion atop the division.

“Kind of had it in my head,” Fox said of his shootout goal. “I was debating between two, stuck with that one and glad I chose it.”

Fox didn’t bring much shootout experience to the ice on Monday night, but he pulled out a beauty when the Rangers needed it most, and even got some Twitter love from Johnny Manziel after being the hero in Monday’s victory.

“Haven’t been in a shootout since maybe my Juniors days,” Fox said. “I don’t expect to go too often.”

Giants head coach Brian Daboll has been all in on the Rangers’ playoff run, and says he almost broke his TV when they lost in overtime Wednesday night.
NEW YORK CITY, NY・1 DAY AGO
WFAN Sports Radio

Subban is a finalist for the third straight year, and fourth time overall, for the NHL’s award given to “the player who best exemplifies leadership qualities on and off the ice and has made a noteworthy humanitarian contribution in his community.”
NEWARK, NJ・10 HOURS AGO
WFAN Sports Radio

Pete Alonso and 'tough, gritty' Mets walk it off after deflating Scherzer update

After the Mets announced Max Scherzer would miss up to two months with an oblique strain, Pete Alonso turned frowns upside down with a walk-off home run.
NEW YORK CITY, NY・1 DAY AGO

Mets outfielder Brandon Nimmo describes how he’s feeling after fouling a ball off his knee and quad on Tuesday night, forcing him to leave the game.
MLB・2 DAYS AGO
Inside The Warriors

Stephen Curry is known for his crowd-hyping celebrations and Friday night he debuted yet another classic.
SAN FRANCISCO, CA・33 MINUTES AGO
WFAN Sports Radio

A scary scene for the Yankees, as pitching prospect Luis Gil asked to be taken out of his Triple-A start while quickly pointing to his elbow.
NEW YORK CITY, NY・1 DAY AGO
The Guardian

Luka Dončić had been dominating for most of the night, yelling in celebration and flexing his arms in Stephen Curry’s house. Then Curry and the Golden State Warriors delivered one of those signature third-quarter flurries that have defined so many of their postseason runs – with this one sparked by Kevon Looney.
DALLAS, TX・2 HOURS AGO

Francisco Lindor on continued Mets struggles: 'The pitchers have nice cars too'

Francisco Lindor is still confident that he will figure things out as he continues to struggle at the plate in year two with the Mets: ‘The pitchers have nice cars too.’
NEW YORK CITY, NY・2 DAYS AGO
WFAN Sports Radio

According to SNY’s Ian Begley, the Knicks internally discussed ‘significant’ trade packages for Damian Lillard last offseason, though it is unlikely he will be moved now.
NEW YORK CITY, NY・12 HOURS AGO
WFAN Sports Radio

Soccer in the City: Blue Wave rolling and Tinnerholm's future

On the latest Soccer in the City, the gang discusses NYCFC’s recent run and reviewd the commentary of Anton Tinnerholm on the New York City FC Network - where he gave a timetable on his return from injury and talked about his future with the club.
NEW YORK CITY, NY・14 HOURS AGO
WFAN Sports Radio

Buck Showalter: Mets will 'keep ducking and dodging and see if we can get to the endgame' after Scherzer injury

The Mets rotation was dealt another huge blow with the loss of Max Scherzer, and Buck Showalter says the team can only continue to weather the storm.
NEW YORK CITY, NY・15 HOURS AGO

Gio isn’t as bummed about the Max Scherzer injury news as he normally would be, because he has full trust in Buck Showalter to keep the team afloat.
NEW YORK CITY, NY・14 HOURS AGO
WFAN Sports Radio

Friday night’s series opener between the Mets and Rockies has been postponed due to inclement weather, and a split doubleheader will be played Saturday.
NEW YORK CITY, NY・12 HOURS AGO
WFAN Sports Radio

Friday's Yankees-White Sox game postponed, to be made up in doubleheader Sunday

Gates at Yankee Stadium will open at 2 p.m. Sunday for a single-admission doubleheader. Game 1 will begin at 3:05 p.m. and Game 2 will begin at 7:05 p.m. or approximately 30 minutes after the conclusion of Game 1, whichever is later.
NEW YORK CITY, NY・10 HOURS AGO