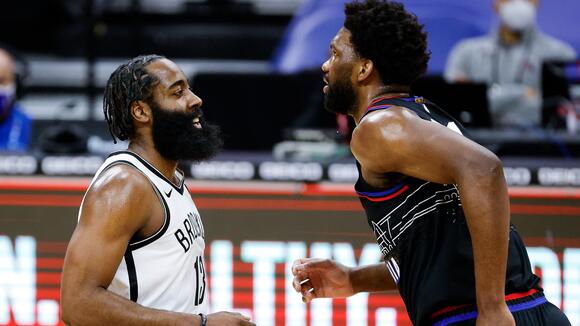 It's rather obvious, that if James Harden wants to leave Brooklyn, his best chance at winning an NBA Championship is by joining Joel Embiid and the Philadelphia 76ers.

Piggybacking off of Shams Charania's report on Monday that Philadelphia would rather wait for a potential sign-and-trade in the offseason for a superstar player like Harden than to trade Ben Simmons now for a suboptimal package, Bleacher Report's Jake Fischer reports that Harden intends to become an unrestricted free-agent this offseason for the first time in his career with the plan to "explore other opportunities."

The 32-year-old nine-time All-Star, six-time All-NBA first-teamer, and future Hall Of Famer reportedly sees the allure of pairing himself with Embiid as his career comes to an end. Combine that with his relationship with Sixers' president Daryl Morey and minority owner Michael Rubin, and a potential sign-and-trade bringing harden to Philly this offseason is certainly a viable option.

For the Nets, they could add Simmons—one of the game's best defensive players and pure athletes, who is also limited on offense in the half court—to Kyrie Irving and Kevin Durant, two of the game's greatest individual scorers and playmakers.

Morey was the GM of the Houston Rockets from 2007-2020 before becoming the 76ers' president of basketball operations and famously acquired Harden from the Oklahoma City Thunder in a blockbuster bringing him to Houston and revitalizing the franchise.

Even last season before Simmons requested a trade, when Harden was still a member of the Rockets, there was widespread speculation that the Sixers were heavily trying to trade Simmons for Harden, but ultimately the Brooklyn Nets landed the superstar guard.

Simmons, 25, has not played a game for the Sixers this season, as he continues to seek a trade. Simmons is a three-time NBA All-Star and two-time All-NBA first team defender. He signed a five-year contract worth $170 million in 2019. He has already made approximate $90 million and he is due around another $114 million over the next three seasons, according to spotrac.com .

Click here to read the full article. Contract incentives are common in professional sports. Most are small relative to the size of the overall salary: Catch 45 passes in an NFL season, earn an extra couple hundred grand, for instance.  By making the 2021-22 All-NBA third team, however, Atlanta Hawks guard Trae Young secured an extra $35 million over the next five seasons. The extension he signed last summer was worth a minimum of 25% of the salary cap ($172.5 million) with the potential to increase to 30% ($207 million) based on his performance this year.  Young can thank the “Derrick Rose...
NBA・1 HOUR AGO
Hoops Rumors

The 2021-22 All-NBA teams have officially been announced by the NBA. For the fourth straight season, Bucks All-Star forward Giannis Antetokounmpo was unanimously selected to the All-NBA First Team by a voter panel of 100 media members. Antetokounmpo, 27, is making his sixth All-NBA team overall. Antetokounmpo, reigning MVP Nuggets...
NBA・1 HOUR AGO