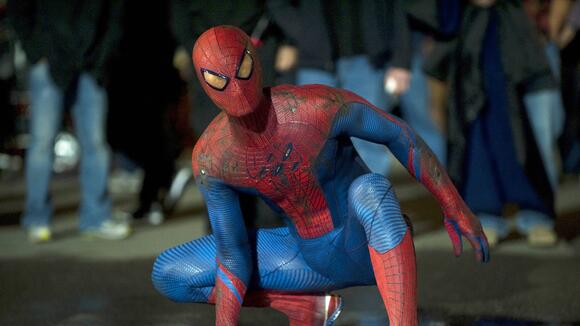 Andrew Garfield confirmed on the “Happy Sad Confused” podcast that he wore the same Spider-Man suit in “ Spider-Man: No Way Home ” that he did in his original “The Amazing-Spider Man” movies. When asked about putting on his original suit again, Garfield responded, “Yeah. I still fit, bruh.”

Garfield played Spider-Man in two comic book tentpoles directed by Marc Webb, “The Amazing-Spider Man” and “The Amazing Spider-Man 2.” While rumors circulated for well over a year that Garfield would be reprising the web-slinger role in “No Way Home” opposite iterations of Spider-Man played by Tom Holland and Tobey Maguire, the actor kept his involvement a secret from nearly everyone in his life for two years. There were three exceptions, however. Garfield told Ellen Degeneres this week that he told the truth to his father, mother and brother.

“It was fun to keep it secret, because you know when you’re planning a surprise birthday party for someone and they’re like, ‘I hate surprises. Tell me, is the party happening? No seriously, don’t mess around because you know I actually hate surprises,'” Garfield said. “So it felt like I was part of organizing a surprise birthday party for a bunch of people who would appreciate it.”

Garfield revealed earlier this month that he even lied about starring in “Spider-Man: No Way Home” to Emma Stone, who starred opposite him as Gwen Stacy in both of “The Amazing Spider-Man” movies.

“Emma [Stone] kept on texting and she was like, ‘Are you in this new ‘Spider-Man’ film?’” Garfield answered when asked if he had told either Stone or Webb about his “No Way Home” return. “And I was like, ‘I don’t know what you’re talking about.’ She was like, ‘Shut up. Just tell me.’ And I’m like, ‘I honestly don’t know.’ I kept it going even with her. It’s hilarious.”

Garfield added, “And then she saw it. She was like, ‘You’re a jerk.’ I didn’t want to tell anyone. I took it super seriously. I told no one.”

“Spider-Man: No Way Home” is now playing in theaters nationwide.

‘Chip ‘n Dale: Rescue Rangers’ Review: The Fuzzy Adventurers Are Back — But Different — In a Very Meta Disney Reboot

Click here to read the full article. If only Andy Warhol had lived to see “Chip ‘n Dale: Rescue Rangers,” the cinematic culmination of the Campbell’s soup can painter’s meta-commentary on the blurring of art and commerce. This frenetic and funny crossbreeding of live action and cartoon is both a reboot and an anti-reboot, a corporate-funded raspberry at corporate IP, and a giddily dumb smart aleck committed to mocking its joke — and making it, too. Director Akiva Schaffer, a producer and occasional helmer, has already helped to invert the meathead action flick (“MacGruber”), the rock biopic (“Pop Star: Never Stop...
MOVIES・1 DAY AGO
Variety

Click here to read the full article. “Pirates of the Caribbean” producer Jerry Bruckheimer reminded fans in a recent interview with The Sunday Times that the future of his Disney mega-franchise does not currently include Johnny Depp. The actor appeared as Jack Sparrow in all five “Pirates of the Caribbean,” earning an Oscar nomination for “Curse of the Black Pearl.” The most recent “Pirates” movie, “Dead Men Tell No Tales,” was released in 2017. Bruckheimer said two “Pirates” scripts are currently in development, but neither include Depp’s former franchise mainstay. “Yes. We’re talking to Margot Robbie. We are developing two Pirates...
MOVIES・2 DAYS AGO
Variety

Click here to read the full article. Chris Rock weighed in on the Johnny Depp-Amber Heard trial during a recent comedy show in London (via Vanity Fair) in which he cracked the following joke: “Believe all women, believe all women except Amber Heard.” The comedian grilled Heard for allegedly defecating on Depp’s bed pillows. “What the fuck is she on?” Rock said about Heard (via Daily Mail). “She shit in his bed! She’s fine, but she’s not shitting fine. She shit in his bed! Once you shit in someone’s bed, you just guilty of everything. What the fuck is going on...
CELEBRITIES・2 DAYS AGO
Hello Magazine

Robin Roberts got emotional as she opened up about her relationship with partner Amber Laign, especially in the midst of a challenging health battle. The Good Morning America star made an appearance on The Ellen DeGeneres Show to promote her new book, Brighter By the Day. VIDEO: Robin Roberts enjoys...
CELEBRITIES・23 DAYS AGO

Princess Eugenie has taken to her Instagram Stories to make an exciting announcement related to The Anti-Slavery Collective, which she co-founded with her best friend Julia de Boinville back in 2017. Resharing a message from the charity organisation, the mother-of-one revealed she was posting "news from my charity". WATCH: Princess...
CELEBRITIES・23 DAYS AGO
SheKnows

Click here to read the full article. It seems like everyone was rooting for Renée Zellweger and Ant Anstead to get together, including an unexpected duo: the Property Brothers. Drew and Jonathan Scott recently revealed that they were the ones that ended up getting Zellweger and Anstead to meet, and subsequently fall in love. And their hard work ended up paying off! Back on April 14, 2022, the Scott brothers sat down with ExtraTV to talk about everything from Drew’s upcoming fatherhood to Jonathan loving GF Zooey Deschanel’s Vanity Fair gown. While we loved the entire interview, we’re losing it over...
CELEBRITIES・24 DAYS AGO
Hello Magazine

Gwyneth Paltrow is a doting mom to two teenage children, Apple and Moses, who she shares with ex-husband Chris Martin. The family are notoriously private, but over the weekend the award-winning actress gave a rare insight into their upcoming plans - and how they are changing things up this year for Mother's Day.
FAMILY RELATIONSHIPS・23 DAYS AGO
The Hollywood Reporter

Paulina Gretzky walked down the aisle in Vera Wang!. The bride shimmered during her wedding with pro golfer Dustin Johnson on Saturday at Tennessee's Blackberry Farm. Gretzky showed off the stunning look on Instagram Monday in a photo of the newlyweds kissing. "4/23/22♥," she simply captioned the post. For...
BEAUTY & FASHION・22 DAYS AGO
Us Weekly

The show — and the vacation — must go on. Jada Pinkett Smith determined that the family trip to India wasn't going to be canceled due to Will Smith's Oscars slap. "Will and Jada have taken the family on [a] vacation that was already planned," a source exclusively tells Us Weekly. The Concussion star, 53, […]
CELEBRITIES・24 DAYS AGO
Hello Magazine

Kate Hudson has realized one of her dreams and has taken to Instagram to share the incredible news with her 15 million followers. Sharing two pictures of her looking casual in a pair of baggy dip-dyed trousers and a white tank top, and singing into a microphone, the actress announced a surprising career change.
CELEBRITIES・23 DAYS AGO
Daily Mail

Katy Perry reacted quite hilariously to a Top 11 contestant on American Idol during a unique song challenge on Monday night's episode. Each of the remaining contestants were given a song to perform by each judge - Perry, Lionel Richie and Luke Bryan - with the singer selecting one and then tasked with guessing which judge picked that song for him or her.
MUSIC・23 DAYS AGO

Click here to read the full article. Amber Heard claims that Warner Bros. “didn’t want to include me” in the upcoming “Aquaman” sequel due to the fallout of her divorce from Johnny Depp. The actor said during her defamation trial against Depp that she was “actively scheduling timing for filming” the second “Aquaman” movie until Depp’s team called her a liar regarding her abuse claims against Depp. Heard said that “communications” about the sequel “stopped at that point.” Heard stars as Mera in several comic book films from Warner Bros. and DC Entertainment. She debuted as the character in “Justice League”...
MOVIES・2 DAYS AGO
hotnewhiphop.com

Kim Kardashian's ex-husband, Damon Thomas, continues to "wish her the best," despite any false narratives about their past relationship. The 51-year-old sat down with DJ Vlad, looking back at his marriage with now-billionaire businesswoman Kim Kardashian in the early 2000s. He believes he's played a "part in their journey," however, he doesn't want to be known as "Kim Kardashian's husband" and wants to "get in control of [his] narrative," as many people fail to recognize he has won Grammys and even made it to the Oscars.
RELATIONSHIPS・22 DAYS AGO
Outsider.com

Geroge Wendt, who played Norm on the classic TV show Cheers, decided to be like Jack when he was in public. We mean Jack Nicholson here. The famed movie actor seemingly did not mind being noticed when out among the non-Hollywood crowd. Nicholson’s attitude about this did ring a bell for Wendt during his show’s incredible run on NBC and in reruns today.
CELEBRITIES・23 DAYS AGO
PopCrush

Spring is always a big time for engagements and weddings, and two beloved internet personalities are the latest to update their relationship status. On April 18, Rachel "Seltzer" Quirico revealed she and longtime boyfriend Trevor "TorcH" Housten were tying the knot after 17 years together. Both of them are beloved figures in the esports world, with Seltzer notably starring in the Syfy reality show WCG Ultimate Gamer. She's also hosted numerous esports tournaments and events for TV/streaming outlets; she also made a recent appearance on G4 TV's Boosted.
RELATIONSHIP ADVICE・23 DAYS AGO
Variety

Click here to read the full article. The “Yellowstone” spinoff series “6666” is joining the mothership show on Paramount Network. It was previously reported that the new show would air exclusively on Paramount+. It will now run on the linear network first before episodes are made available to stream on demand. A premiere date has not been set. “6666” was originally announced in February 2021 as one of several new shows on the development slate of “Yellowstone” co-creator Taylor Sheridan. The show takes place at the real 6666 ranch in Texas. It was featured in Season 4 of “Yellowstone,” with Jimmy (Jefferson...
TV SERIES・20 HOURS AGO
Variety

Click here to read the full article. As the war in Ukraine approaches a grim, three-month mile marker, and the Russian military continues its relentless onslaught, the harsh crackdown on domestic opposition by the Putin regime has left a beleaguered film industry pondering its next steps. Many Russian filmmakers fear they’ll have no choice but to toe the party line, or to flee a country that is increasingly being shut out of the international community. Two-time Oscar nominee Alexander Rodnyansky (“Leviathan,” “Loveless”), the Kyiv-born producer who has called Russia home for nearly three decades, left Moscow on March 1 after being...
WORLD・2 DAYS AGO
Variety

Click here to read the full article. When Nicola Coughlan announced that “Bridgerton” Season 3 will focus on Colin Bridgerton (Luke Newton) and Penelope Featherington’s love story, viewers couldn’t help but wonder why the show was straying from the Julia Quinn books it’s based on. While the first two seasons of the Netflix hit followed the books — first focusing on Daphne Bridgerton (Phoebe Dynevor) and then on Anthony Bridgerton (Jonathon Bailey), the third book is about Benedict. Jess Brownell, who stepped in as the new showrunner as Chris Van Dusen exited, exclusively shares the reasoning with Variety. “I really feel like it’s...
TV SERIES・2 DAYS AGO