ABCNY
2022-01-25
Authorities are asking for the public's help after a 39-year-old mother and her two young children went missing in New Jersey. Cheng Hsiao and her two children, 3-year-old Ethan and 2-year-old Ian, live in Towaco section of Montville Township and were reported missing on Sunday. Officials say there is concern for their well being. They were last known to be at their family home on Old Lane on Saturday, and it is believed that they left their residence between 6:30 a.m. and 4 p.m. that day. 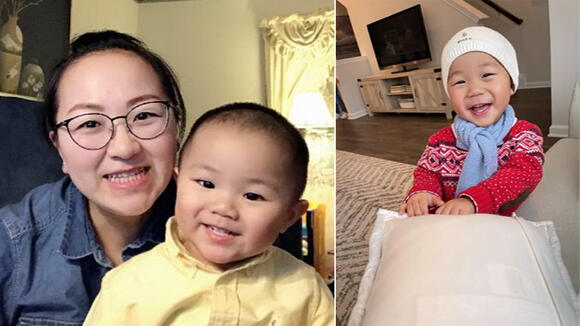 Cheng Hsiao has black hair and brown eyes. She is 5-foot-2 and weighs approximately 121 pounds. Both Ethan Hsiao and Ian Hsiao have black hair and brown eyes. Anyone with information regarding their whereabouts or this investigation is encouraged to make contact with Montville Township Police Department Detective Bureau at 973-257-4300 or the Morris County Prosecutor's Office Missing Persons Unit On-Call Detective through the Morris County Communications Center at 973-285-2900. Callers seeking to remain anonymous can contact Morris County Crimestoppers at 1-800-743-7433. ALSO READ | Mayor Adams unveils New York City's 'Blueprint for Safety' to combat violence

Dear Lord, please help them get back home safely and uninjured. 🙏🏽

Animal Control recued 16 German shepherds and three Dobermans from what officials called the dilapidated basement of a once shining mansion in New Jersey Tuesday.
PATERSON, NJ・2 HOURS AGO
ABCNY

Police are investigating two fatal hit-and-run crashes on Long Island that happened not far from each other. Both happened in Suffolk County late Monday night.
SUFFOLK COUNTY, NY・9 HOURS AGO
ABCNY

Authorities say 25-year-old Andrew Abdullah, who has about 20 prior arrests, was the man seen pacing around the subway car before shooting 48-year-old Daniel Enriquez in the chest, killing him.
NEW YORK CITY, NY・19 HOURS AGO
ABCNY

Police released the first photos of the man suspected of fatally shooting a man in an unprovoked attack on a Manhattan-bound subway train.
MANHATTAN, NY・1 DAY AGO
ABCNY

Three females were killed in a crash near a catering hall on Long Island, as they left a Sweet 16 birthday party.
ACCIDENTS・2 DAYS AGO
ABCNY

Mayor Eric Adams along with the NYPD and Schools Chancellor David Banks held a briefing on public safety in the wake of the massacre at an elementary school in Texas.
NEW YORK CITY, NY・38 MINUTES AGO

One single mom from New Jersey has had a rough two months, with a devastating death in the family followed by more misery when her apartment complex caught fire.
CITY OF ORANGE, NJ・57 MINUTES AGO
ABCNY

A search was launched after 15-year-old Naz'ier Randolph, of Paterson, disappeared on Saturday afternoon while swimming with friends.
PATERSON, NJ・2 DAYS AGO
ABCNY

Omar Bojang, the 18-year-old who was allegedly driving the scooter from which a gunman killed 11-year-old Kyahara Tay, surrendered Monday.
BRONX, NY・1 DAY AGO

A 20-year-old was shot in face and killed after meeting with alleged motorcycle sellers under the Deegan Expressway.
BRONX, NY・2 DAYS AGO
ABCNY

A 19-year-old man is in the hospital after being attacked by another man with a hatchet.
MANHATTAN, NY・1 DAY AGO
ABCNY

Charges were filed against nearly three dozen alleged gang members who police say rapped about their crimes and beat a pigeon to death with a cane.
BRONX, NY・1 DAY AGO
ABCNY

'What are we doing?': Murphy plea highlights local reaction to Texas shooting

Senator Murphy's plea echoed the sentiments of many across the Tri-State area, who reacted to the horrific shooting with despair, anger, frustration and a feeling of helplessness.
TEXAS STATE・1 HOUR AGO
ABCNY

The man was shot near the BP gas station at Communipaw Avenue and West Side Avenue just before midnight on Tuesday.
JERSEY CITY, NJ・5 HOURS AGO
ABCNY

CONNECT will be launched at nine clinic sites in high-need areas throughout The Bronx, Manhattan, and Brooklyn. They are currently accepting referrals.
NEW YORK CITY, NY・6 HOURS AGO
ABCNY

Nassau County is increasing waterway patrols ahead of the busy Memorial Day holiday weekend and urging boaters to refrain from drinking and driving.
NASSAU COUNTY, NY・2 HOURS AGO