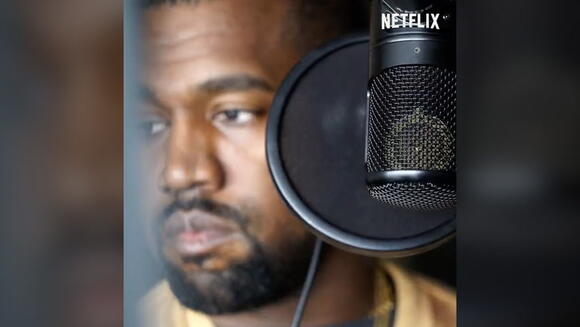 A brand new Kanye West documentary shows footage of his mother warning him off becoming “too arrogant”.

The controversial rapper’s career is profiled in a three-part series titled Jeen-Yuhs , which will be released on Netflix in February.

Filled with footage of his rise from producer to successful rapper, and filmed in Chicago and New York, the documentary also focuses on West’s relationship with his mother, Donda.

In a moment from 2001, West is visiting his mother in her Chicago home when he’s discussing his success after producing the Jay-Z song "Izzo (HOVA)".

“I was thinking about something I was going to say to you, Kanye, that I thought was important,” Donda tells him, adding: “How you were down to earth and everything, but you know, you got a lot of confidence [and] come off a little arrogant even though you're humble and everything.”

She continues: “But it be important to remember that the giant looks in the mirror and sees nothing.”

At this, Kanye smiles and lowers his head. “You know what I mean?” she asks him, to which West responds: “You think I come off too arrogant?”

Donda replies: “No. [You] come off just right ‘cause it's what's inside. You can’t be a star and not be a star; you've gotta have some oomph about you. I’m not saying you come off like that. I think the way you handle yourself is really just perfect. 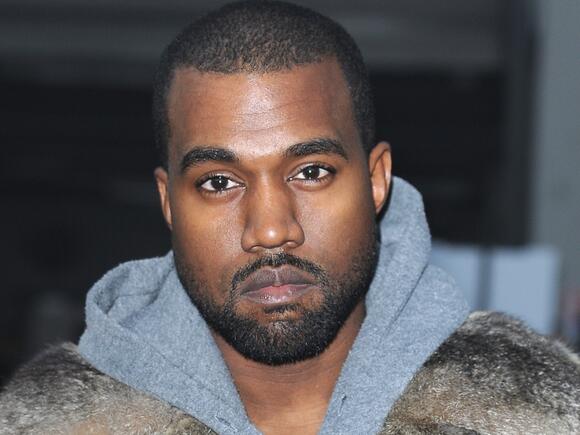 West named his 10th album after his mother, who died in November 2007. Jeen-Yuhs will be released on Netflix on 16 February.

He is not the bad guy because he wants to be with his kids. Kardashians don't decide whether or not he can be a dad. Let him be one!

His mother was right he is very arrogant! He thinks he is some type of all knowing godlike person.

Too $hort has worked with a score of legendary producers throughout his almost 40-year career, from Jermaine Dupri and Lil Jon to Daz Dillinger and DJ Pooh. But one big-name beatsmith he passed up the opportunity to work with was Kanye West. During a recent interview with VladTV, the Bay...
CELEBRITIES・28 DAYS AGO
Hello Magazine

According to Tina Brown's new book, "The Palace Papers," Prince William was aware of his status as future king from a young age.
CELEBRITIES・28 DAYS AGO
The Independent

Princess Eugenie has taken to her Instagram Stories to make an exciting announcement related to The Anti-Slavery Collective, which she co-founded with her best friend Julia de Boinville back in 2017. Resharing a message from the charity organisation, the mother-of-one revealed she was posting "news from my charity". WATCH: Princess...
CELEBRITIES・28 DAYS AGO
The Independent

The Kardashian-Jenner clan were in Italy this weekend to attend the nuptials of Kourtney Kardashian and Travis Barker, where the famous family rotated through a number of extravagant designer looks.However, it appears the dresses weren’t always easy to navigate Italy in, as Kylie Jenner at one point captured the moment her sister Kendall Jenner struggled to walk in the dress she wore for the wedding ceremony.In a clip shared to Kylie’s Instagram Stories on Sunday, Kendall, 26, who was wearing a Dolce & Gabbana champagne-coloured dress with a low back and floral detailing, could be seen wearing slide sandals...
CELEBRITIES・1 DAY AGO
OK! Magazine

Donald Trump didn't hold back when asked his opinions on the royal family during a sit down for Piers Morgan Uncensored. While chatting with the titular host for an interview that airs on Monday, April 25, the former president took aim at Meghan Markle, insisting he hasn't been "a fan" of hers "from the beginning" because of how she treats Prince Harry."Poor Harry is being led around by his nose," he told Piers Morgan. "And I think he’s an embarrassment." Trump also believes that the parents-of-two's dynamic will eventually lead to irreparable marital strife. "I want to know what’s going...
RELATIONSHIPS・29 DAYS AGO
TheStreet

Once again, Disney (DIS) - Get Walt Disney Company Report is finding itself embroiled in a political quagmire owing to its support of the LGBTQ community, after Florida Gov. Ron DeSantis punished Disney for denouncing his “Don’t Say Gay Bill,” by seeking to revoke Disney World’s designation as a special tax district (which as we pointed out, is ultimately a meaningless gesture).
FLORIDA STATE・28 DAYS AGO

The Today Show stars, including Hoda Kotb, Savannah Guthrie, and Craig Melvin, are reeling from the death of a beloved fellow Today host, one whose hiring onto the show made history at NBC studios. The co-hosts took a moment out of Monday morning's show to honor the legacy of Jim...
CELEBRITIES・29 DAYS AGO
Popculture

Netflix has canceled another one of its major shows, with this one getting the ax after only two seasons. Variety reports that hit sci-fi drama Raising Dion has been dropped by the streamer, following its recent season debut. The news seems to have been revealed by series star Sammi Haney, who shared the news with fans on Instagram. "Sad to say that Raising Dion is CANCELED [sic] Thank you for all of the amazing support we got from all of our wonderful fans!" Haney wrote, in part. "Season 2 was a success, equal to Season 1, even if just looking at how many people watched all of it and wanted a season 3!"
TV SERIES・28 DAYS AGO
People

Megan Fox wants her kids to express themselves however they please. In a wide-ranging interview with Glamour U.K. for their April cover story, the 35-year-old actress opens up about how she teaches her children, Journey River, 5, Bodhi Ransom, 8, and Noah Shannon, 9, about gender identity and encourages them to be confident in who they are.
FAMILY RELATIONSHIPS・28 DAYS AGO
The US Sun

GENERAL Hospital revealed a major character change is coming to the show this week as one of its stars battles health issues. There are often comings and goings happenings on soaps, and the latest cast switch-up involves longtime cast member Nancy Lee Grahn. Nancy, who turns 66 on Thursday, has...
CELEBRITIES・29 DAYS AGO

Gene Simmons of Kiss and several other musicians are beginning to react to the news of Elon Musk’s purchase of Twitter for $44 billion, questioning Musk’s desire for more “free speech” and how it may impact the spread of more hate and misinformation. “Fantastic news, at...
BUSINESS・28 DAYS AGO
Hello Magazine

Kate Hudson has realized one of her dreams and has taken to Instagram to share the incredible news with her 15 million followers. Sharing two pictures of her looking casual in a pair of baggy dip-dyed trousers and a white tank top, and singing into a microphone, the actress announced a surprising career change.
CELEBRITIES・28 DAYS AGO
The Independent

Johnny Depp was asked about a text in which he told Amber Heard to take “no meetings” and “no movies”.The actor took the stand again on Monday (25 April) as part of the defamation case opposing he and Ms Heard in Fairfax, Virginia. He has testified every day since Tuesday (19 April), except when court broke on Friday (22 April) and on the weekend. Mr Depp was first questioned by his own lawyer and has since been cross-examined by Ms Heard’s legal team.Ms Heard’s attorney first read a text from her to Depp, which read: “I’m at a coffee...
CELEBRITIES・29 DAYS AGO
musictimes.com

Andrew Woolfolk, popularly known for being Earth, Wind & Fire's longtime saxophonist, has passed away at the age of 71; what was his cause of death?. Fellow bandmate Philip Bailey took to Instagram to confirm the tragic news and recalled their early years, saying they met in High School and quickly became friends and bandmates.
BILOXI, MS・28 DAYS AGO

A woman has revealed several “red flags” that she found in the apartment of the man she’s dating, which included two books about pregnancy and a woman’s ring.In a recent video shared to TikTok, Devin, @discoveringdevin, filmed herself sitting on a bed and putting her thumb down, as the text reads: “Red flags in his apartment.”She then began by showing four Apple MacBooks, all placed on top of each other, on a desk. “Four laptops…what are you hiding?” Devin wrote in the text over the clip.Next, she documented what appeared to be a “girl’s ring” on a white shelf....
RELATIONSHIP ADVICE・29 DAYS AGO
hotnewhiphop.com

50 Cent cast doubt on Megan Thee Stallion's recent comments about not having been in an “intimate relationship” with Tory Lanez, prior to the infamous shooting in July 2020 which left her with gunshot wounds. Megan's comment came during a recent interview with Gayle King, during which she...
CELEBRITIES・28 DAYS AGO
The Independent

A spectator was reportedly removed from the Amber Heard v Johnny Depp defamation trial, after shouting at the Pirates actor. The ongoing trial resumed today (23 May), with the Pirates of the Caribbean star expected to be questioned again in court.According to a live report from Law & Crime, this morning before the judge was on the bench, a woman with a baby yelled out to Depp that they were soul mates and claimed: “This baby is yours!”She was promptly removed from the gallery. This isn’t the first time spectators have interrupted the proceedings. A few days ago, a...
CELEBRITIES・1 DAY AGO
PopCrush

90 Day Fiancé: Before the 90 Days star Johnny Chao is showing off a new look on social media. The reality TV star rocked a fresh-faced look on the show. However, Chao debuted some new facial hair in his most recent post on Instagram. More specifically, he grew a beard and mustache.
TV & VIDEOS・28 DAYS AGO