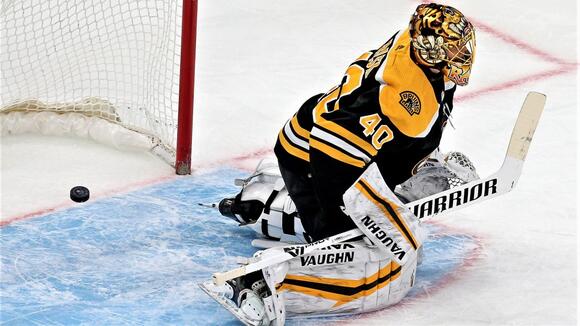 BOSTON (CBS) — It’s early in the Tuukka Rask 2.0 Era for the Boston Bruins, but the results have been discouraging thus far.

Rask fell to 2-2 in his four starts since rejoining the Bruins this month with a 5-3 loss to the Ducks on Monday night. Rask allowed five goals on just 27 shots faced, sinking Boston’s chances in what ended up as just the Bruins’ third loss of the month.

Never one to shy away from a bad performance, Rask spoke with the media after the game and matter-of-factly explained his level of play.

Monday’s performance dropped his save percentage to a grisly .844, with his goals-against average climbing to 4.29. He’s allowed five goals in two of his starts — one of which lasted just one period, as he gave up five goals on 12 shots in a blowout loss to Carolina — and two goals apiece in his other two starts.

Linus Ullmark hasn’t been much better than Rask, posting an .882 save percentage in three appearances since Rask returned to the ice. Jeremy Swayman, who got bumped down to Providence to make room for Rask, is 2-1-0 with a .920 save percentage and 2.02 GAA in three AHL starts.

Rask was of course unable to get his AHL warmup action in due to COVID cancellations, and the Bruins surely expected some rust in the short term. Still, Rask’s performances thus far have likely fallen short of even those tempered expectations.

“Well he’s not where he needs to be. I mean, that’s evident,” head coach Bruce Cassidy said. “We weren’t sure he would be this early, either. I think you need seven or eight probably starts. … Certainly needed a few more saves if we were gonna win tonight, but again, he’ll need more starts and then we have to evaluate it.”

Any goaltender will obviously allow pucks to get past him, but the Ducks’ second goal — which came off a shorthanded net drive that didn’t even generate a real shot on net — certainly stood out as one that neither Rask nor the Bruins can accept.

On that goal, which put the Bruins behind 2-0, Rask said he let his stick get out of position.

As for specific areas where Rask knows he needs to improve, he said his depth in the crease has been off and that his puck tracking is “not as sharp as it should be.” He said the schedule doesn’t provide too much opportunity to simulate game situations in practice, and he also said he understands that the team doesn’t “have the luxury of throwing games away” while he gets up to speed.

But the veteran of 668 NHL games expressed confidence that he’ll get where he needs to be.

“It’s gonna come. I gotta work on it,” Rask said. “The only way you can do it is by playing. … I need to be sharp every time I go out there, and that’s my job to find it. It’s not easy. I’ve just gotta work on it, and game in, game out, find that consistency. I’m trying to help the team get some wins.”

BOSTON -- Marcus Smart made a little NBA history on Monday. The Celtics guard won the 2021-22 NBA Hustle Award, becoming the first two-time winner of the honor.Smart previous won the Hustle Award in 2018-19. The award was first introduced for the 2016-17 NBA season.The award is given to the player that does all the little things that don't show up in the usual box score. Celtics fans best know those as "winning plays," and Smart makes his fair share of them.The NBA's hustle stats include deflections, loose balls, loose balls recovered, charges drawn, screen assists, contested shots and box-outs. This season, Smart ranked fifth in the NBA in loose balls recovered with 74, 10th in charges drawn with 16, and 11th in deflections with 205.Smart is really racking up the awards this season. Last month, he was named the NBA's Defensive Player of the Year, and last week, Smart was named to the NBA's All-Defensive First Team.
BOSTON, MA・5 HOURS AGO
CBS Boston

BOSTON -- With five straight victories and wins in nine of their last 12 games, the Red Sox finally have something to feel good about. They decided on Sunday to spread those good vibes with the Boston Celtics.On their way out of Fenway Park following their walk-off win to complete a four-game sweep of the Mariners, the Celtics were decked out -- in head to toe, in some cases -- in Boston Celtics gear.Franchy Cordero, who hit the walk-off grand slam with two outs in the bottom of the 10th inning, was representing Marcus Smart, as was Trevor Story. Smart took notice of both players wearing his jersey and shared his appreciation on Twitter:Tanner Houck wore the full uniform, shorts and all, to represent Jayson Tatum, a jersey which was a popular choice among Red Sox players:The Celtics will host the Miami Heat in Game 4 in Boston on Monday night, looking to even the series at two games apiece. The Red Sox will be in Chicago, but they made sure to lend their support before heading out of town.
BOSTON, MA・12 HOURS AGO
CBS Boston

Marcus Smart out, but Robert Williams returning to Celtics lineup for Game 4

BOSTON -- The Celtics got some good news and some bad news on the injury front for Game 4 of the Eastern Conference Finals. Robert Williams will return to the Boston lineup on Monday night, but Marcus Smart will miss the game with a right ankle sprain.Smart tried to test the ankle ahead of Monday's game, but Celtics head coach Ime Udoka described his starting point guard as "quite swollen" during his pre-game press conference. Losing Smart isn't the best news for the Celtics, as they look to even the series against the Miami Heat with a win on Monday. Smart...
BOSTON, MA・2 HOURS AGO
CBS Boston

BOSTON -- Not a lot went right for the Celtics in Game 3 of the Eastern Conference Finals, and most of it was their own doing. A slow start and turnovers doomed Boston on Saturday night, and now momentum is back with the Miami Heat in the Eastern Conference Finals. Boston turned the ball over 24 times -- at home -- leading to 33 Miami points, and the Heat won Game 3, 109-103. Miami led the contest from start to finish and led by 26 at one point. The Celtics made it a one-point game late in the fourth quarter, but...
MIAMI, FL・1 DAY AGO

BOSTON -- If you've been able to follow along with every injury update during the Eastern Conference finals, then congratulations are in order. The series has had more twists and turns than an M. Night Shyamalan screenplay ... and they've only played three games. It's no surprise, then, that as the Boston Celtics prepare to host the Miami Heat for Game 4, the injury report for both teams looks like a beautiful, chaotic mess. As of Monday morning, the Celtics' injury report looks like this: Sam Hauser (shoulder) - OUT Marcus Smart (ankle) - QUESTIONABLE Jayson Tatum (nerve impingement) -...
13 HOURS AGO