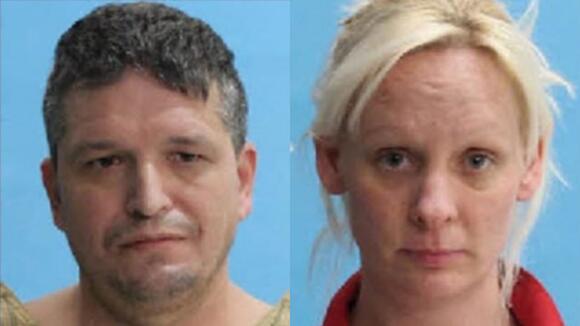 A father and his live-in girlfriend are facing felony charges after locking the man's 14-year-old autistic son in a shed.

Officers responded to Shoemaker's home and met with an investigator from the Department of Children and Families who showed officers the shed that the teen was locked in.

An officer unlocked the shed and spoke with the teen who said he had been locked inside for a few hours.

The teen told authorities that his father and Hines would lock him in the shed regularly.

Lt. Troy Carrillo told NBC 2 News “when talking to the victim, he explained to us, he was like ‘hey did you see that bottle of water that was in there?’ We were like yeah, we [saw] it. He was like, ‘I was saving that for the weekend because I knew that was the only thing I was going to drink that entire time. And we asked him, ‘hey where do you use the restroom at? so on and so forth?’ He said if I have to urinate, my dad makes me go in the yard. If I have to do something else, he makes me walk to the closest store to use the restroom.”

Inside the shed, police found a bed, trash, tools and a bucket containing human waste.

The shed could only be locked from the outside, had no electricity or plumbing, and was hot because there was no means of climate control.

Officers say the shed had one window and a vent.

The 14-year-old told investigators he was often locked inside the shed and slept in it nightly.

The victim said Hines had the idea to lock him in the shed for extended periods of time, and eventually, his father agreed to do so.

Authorities say Shoemaker blamed his son for being locked in the shed, telling NBC 2 News “when we talked to the dad he tried to justify what he was doing as far as it was his son’s fault because it was his behaviors and stuff that made him put him in the shed.”

DCF realized the boy was being kept in the shed when they made a regular visit to the home, following a complaint by the boy’s grandmother.

The victim is now in his grandmother’s care in New York.

Shoemaker and Hines are facing felony charges of cruelty toward a child and aggravated battery on a child.

They should never walk free again! How could anyone do that to a child let alone your very own😡

devastatingly sad . Poor kid . I can never NEVER understand why theres so much evil in this world . But God sees everything and they will be judged harshly when theyre dead and gone .

He had a girlfriend! He didn't have time for his child! Sterilize them BOTH!

A 14-year-old Black teen with autism was attacked by New York police officers while he was waiting for his siblings to finish checking out at a Target store on April 18. Video shows the Black teenage boy being tackled to the ground by deputies. His sister can be heard in the background yelling “Get off of my brother! What are you doing?”
LAW ENFORCEMENT・28 DAYS AGO
Newsweek

Bodycam footage captured the snake slithering around the room as an officer attempted to capture it.
BOYNTON BEACH, FL・28 DAYS AGO
NBC News

A Florida woman has been arrested after allegedly making a bomb threat to her son’s high school, enraged that her son wasn't being fed enough at the cafeteria. Anaya Metoya Smith, 41, was arrested Wednesday in connection with a threatening voicemail she left at Cocoa High School on Feb. 3 around 5:30 p.m., saying she’d "blow ... up" the school, according to the probable cause affidavit. The city of Cocoa is about 45 miles east of Orlando.
ORLANDO, FL・29 DAYS AGO
Newsweek

One man has been arrested after the bear was trapped under the wheel of a tractor and tied to an earth mover.
PUBLIC SAFETY・28 DAYS AGO

A new trend in treasure hunting called magnet fishing has blown up over the past two years, evidenced by an explosion of YouTube channels covering the hobby. Magnet fishing is a pretty simple activity. Hobbyists attach high-powered magnets to strong ropes, drop them into waterways and see what they attract.
HOBBIES・29 DAYS AGO
Daily Mail

A 60-year-old man who has been charged in the January 6 insurrection at the Capitol has been identified as the son of a fames American artist. Vincent Gillespie, who has been in a legal battle against his stepmother to gain control of paintings by his father, Gregory Gillespie, was arrested in February on charges relating to the Capitol riot.
ATHOL, MA・28 DAYS AGO
Fox News

A sheriff in Florida arrested his own daughter on drug charges as his department continues its war on addictive substances. Franklin County Sheriff A.J. Smith gave a statement on April 19 confirming that his daughter, Kristen Kent, had been arrested under suspicion of meth trafficking two days prior. "Methamphetamine does...
FLORIDA STATE・28 DAYS AGO

A juvenile has been arrested in connection with the death of Lily Peters, the 10-year-old girl whose body was found Monday morning in a wooded area in Chippewa Falls, Wisconsin, police said in a press conference on Tuesday evening. "Earlier this evening we arrested a juvenile suspect in this case,"...
CHIPPEWA FALLS, WI・28 DAYS AGO
Reason.com

How was a man in a Louisiana prison who was supposed to be on suicide watch allowed to smoke insecticide, leading to his death?. That's the question Jennifer Bartie wants answered. The man was her son, 37-year-old Javon Kennerson, who died in December 2020 several weeks after falling into a sudden and severe mental health emergency.
PUBLIC SAFETY・29 DAYS AGO
Outdoor Life

Paul Williams fought for his life against a large black bear on the afternoon of April 21 outside of his home in Beaubassin East, a rural Canadian community in southern New Brunswick. “She got me in the face, she got me on my arm,” he said, of his wounds estimated...
NEW BRUNSWICK, NJ・28 DAYS AGO

A first-class passenger on an Arizona-bound Delta Airlines plane was arrested for allegedly using homophobic slurs against a flight attendant and physically assaulting the crew member for not serving him a drink.Christopher Alexander Morgan allegedly threw a glass of ice and an onboard telephone at the flight attendant for refusing to continue serving alcohol to him.Mr Morgan was arrested when flight 2908 touched down at the Phoenix Sky Harbor International Airport on 22 April and is facing charges of interference with flight crew members, which can be punishable with up to 20 years in prison.The passenger called the flight...
PUBLIC SAFETY・28 DAYS AGO
Newsweek

"Not only was that so disgusting but she was also starving your child," one user commented.
FAMILY RELATIONSHIPS・28 DAYS AGO
Newsweek

The counterfeit bills will "look authentic, and may even feel authentic," warned Newton County Sheriff's Office in Georgia. Previous incidents have been linked to auto thefts.
COVINGTON, GA・28 DAYS AGO
Black Enterprise

Officials charged a Wisconsin man with a federal hate crime in the series of intimidation and threats that targeted at least one Puerto Rican neighbor and eight Black residents in his apartment complex. According to CNN, Milwaukee County resident William McDonald faces a federal charge of “willfully injuring, intimidating, or...
MILWAUKEE COUNTY, WI・28 DAYS AGO
markerzone.com

A 37-year-old man has been charged with murder after a 23-year-old hockey player was stabbed and killed over the weekend in Moscow. According to reports, the man will be kept in custody until at least June 24th, when he is expected to face trial. Newer details from Sport24.ru state Roman...
PUBLIC SAFETY・29 DAYS AGO
Newsweek

The Santa Fe Sheriff doesn't believe Alec Baldwin is out of the woods just yet in regards to the ongoing investigation into Halyna Hutchins' death on the Rust film set. The late 42-year-old cinematographer was killed while on set of the Western film in October 2021 after the actor, 63, fired a prop gun that contained live rounds. While multiple individuals involved in the production of the film — including Baldwin, the film's assistant director David Halls, armorer Hannah Gutierrez-Reed and more — have been questioned about their apparent roles in the fatal mishap, the Santa Fe Sheriff's Department doesn't...
SANTA FE, NM・28 DAYS AGO