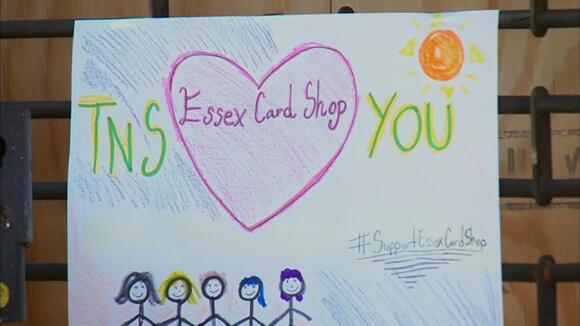 A 13-year-old boy was charged with arson, reckless endangerment and criminal mischief for allegedly setting the fire that burned through an East Village card shop earlier this month. The boy, being hustled out of the Essex Card Shop by an older woman, was the last customer the manager saw before the flames erupted. The suspect is not being identified due to his age, and further details have not been released. ALSO READ | MTA officials address alarming rise in crime, promise more uniformed officers on platforms

It all comes as the community bands together in an effort to save the family-owned small business that is now unrecognizable . "Having your dreams burn down right in front of your eyes....it's hard," owner Saba Aslam said. The Aslam family poured their hearts and souls into making their business different for decades, and that kind of New York City shop where you could find just about anything. But from the ashes came something beautiful. Loyal customers posted, calling it a beloved institution and the heart and soul of the neighborhood. So far, a GoFundMe has raised nearly $70,000, money they will use to rebuild. RELATED | Bronx DA Darcel Clark to man who shot baby girl: 'You're not going to get away with it'

The mugger stole about $4,200 from the victim's pocket before fleeing.
QUEENS, NY・4 DAYS AGO
ABCNY

A police car remained outside an apartment building in Brooklyn on Sunday night after a young girl was found dead in her fourth-floor apartment.
BROOKLYN, NY・3 DAYS AGO
ABCNY

The NYPD said they are stepping up patrols outside Black houses of worship in response to the mass shooting in Buffalo.
BUFFALO, NY・3 DAYS AGO

A white 18-year-old wearing military gear and livestreaming with a helmet camera opened fire with a rifle at a supermarket in Buffalo, killing 10 people and wounding three others Saturday in what authorities described as "racially motivated violent extremism."
BUFFALO, NY・3 DAYS AGO
Daily Mail

A young father who was caught driving while unlicensed has claimed he was rushing his baby son to the hospital after a health scare. Slade James Watson, 25, from Deception Bay north of Brisbane was pulled over by police about 1.45pm on November 10 last year. He made the decision...
PUBLIC SAFETY・23 DAYS AGO
CBS News

Police in Alabama say a South Carolina truck driver has confessed to killing a woman who disappeared 21 years ago and to hiding her body in a suitcase. Police in Bessemer, Alabama told news outlets that South Carolina native Brian Jones traveled back to Alabama last month and admitted to killing 41-year-old Janet Luxford in 2001. He then led investigators to a green suitcase with bones inside, police said.
BESSEMER, AL・23 DAYS AGO
Fox News

A sheriff in Florida arrested his own daughter on drug charges as his department continues its war on addictive substances. Franklin County Sheriff A.J. Smith gave a statement on April 19 confirming that his daughter, Kristen Kent, had been arrested under suspicion of meth trafficking two days prior. "Methamphetamine does...
FLORIDA STATE・23 DAYS AGO

Lawyers for a Florida man say he continues to fight for his life after he was “cooked alive” earlier this year, when a sheriff’s deputy is alleged to have shot him with a stun gun while the man was covered in gasoline from having fueled his dirt bike.
OSCEOLA COUNTY, FL・23 HOURS AGO
The Guardian

A woman who lost both arms in a savage pit bull attack keeps asking her mum to hold her hand during recovery.While Kyleen Waltman, 38, is conscious and in "good spirits", she doesn’t fully comprehend the extent of her injuries, according to sister Amy Wynn."At times we don’t think she has gripped the fact she has lost her arms because she will ask our mama to hold her hand and mama says ‘I am’, and Kyleen will say, ‘OK’," Ms Wynn said in a GoFundMe update, which has raised more than $212,000 for medical expenses."It’s sad to see her like...
ACCIDENTS・23 DAYS AGO
Newsweek

The counterfeit bills will "look authentic, and may even feel authentic," warned Newton County Sheriff's Office in Georgia. Previous incidents have been linked to auto thefts.
COVINGTON, GA・23 DAYS AGO

Foster mother Cristal Starling faced a lose-lose proposition after officers raided her Rochester, New York, apartment in October 2020 and took all the cash they could find. Starling’s choices were simple: She could pay more than half of the seized amount to an attorney to help her fight back, or she could settle out of court and split her money 50-50 with law enforcement.
ROCHESTER, NY・23 DAYS AGO
Tracey Folly

*This is a work of nonfiction based on actual events as told to me by a family member who experienced them firsthand; used with permission. When my mother worked at Walmart, she had a coworker who hated spending time with his wife. For the most part, he and his wife worked opposite shifts. When she was off from work, he was busy at his job. When he had the day off, his wife was out of the house at work. It was just the way he liked it.
1 DAY AGO
Newsweek

Bodycam footage captured the snake slithering around the room as an officer attempted to capture it.
BOYNTON BEACH, FL・23 DAYS AGO
insideedition.com

An assistant manager who hid behind a counter during the massacre at a Buffalo grocery store says a 911 operator hung up on her because she was whispering. Latisha Rogers, 33, ducked behind a customer desk and called for help as the gunman stalked the aisles at Tops supermarket. Rogers...
BUFFALO, NY・23 HOURS AGO
NBC News

A Florida woman has been arrested after allegedly making a bomb threat to her son’s high school, enraged that her son wasn't being fed enough at the cafeteria. Anaya Metoya Smith, 41, was arrested Wednesday in connection with a threatening voicemail she left at Cocoa High School on Feb. 3 around 5:30 p.m., saying she’d "blow ... up" the school, according to the probable cause affidavit. The city of Cocoa is about 45 miles east of Orlando.
ORLANDO, FL・24 DAYS AGO
Outdoor Life

Paul Williams fought for his life against a large black bear on the afternoon of April 21 outside of his home in Beaubassin East, a rural Canadian community in southern New Brunswick. “She got me in the face, she got me on my arm,” he said, of his wounds estimated...
NEW BRUNSWICK, NJ・23 DAYS AGO
BBC

A man has been jailed for life for the murder of a mother-of-four whose body was found in undergrowth by a roadside. The body of Helen Anderson, 41, from Finsbury Park in north London, was found beside a slip-road of the A3 near Guildford, Surrey, on 23 August. Dane Messam,...
PUBLIC SAFETY・23 DAYS AGO
markerzone.com

A 37-year-old man has been charged with murder after a 23-year-old hockey player was stabbed and killed over the weekend in Moscow. According to reports, the man will be kept in custody until at least June 24th, when he is expected to face trial. Newer details from Sport24.ru state Roman...
PUBLIC SAFETY・24 DAYS AGO