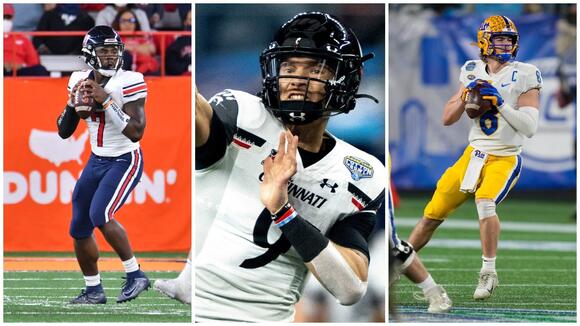 Often times when the Eagles quarterback position is discussed, there are two options that are consistently brought up.

One option is to give Jalen Hurts a second year, see if he develops and use the draft picks to build up the roster. The other option is to go all-in on an elite veteran, trading away draft capital to get a difference-making quarterback right now.

The goals of both are the same. The Eagles need to find their quarterback. They need to do whatever it takes to find that quarterback.

But while it isn’t brought up often, there is a very real, very possible third option for the Eagles as they attempt to find their franchise quarterback — drafting a quarterback.

The Eagles have been doing their homework on the quarterbacks in this year’s draft to try to be that team. In fact, Howie Roseman traveled to see some of the top quarterbacks in person this year, a rare move for the general manager, but perhaps it shouldn’t be surprising.

Whether the Eagles draft a quarterback comes down to their own evaluation of the position both this year and next year. How they view the 2023 quarterback class could impact what they do in 2022. Their (wrong) evaluation about the 2017 NFL Draft class gave them more incentive to move up in 2016 for Carson Wentz. So this is a two-class evaluation, not just the 2022 class.

The question the Eagles have to ask themselves is whether a quarterback in this draft class has a higher ceiling than Hurts does. Can Pittsburgh’s Kenny Pickett, Cincinnati’s Desmond Ridder or Liberty’s Malik Willis be better than Hurts? It isn’t who gives them a better chance to win in 2022. It is who gives them the best chance at getting elite quarterback play for the next 5-plus seasons.

If they believe one of the rookies in this year’s class can, than they will seriously consider drafting one — because there are some real benefits to going with a rookie over Hurts in 2022:

** Resets the rookie pay timeline: Something that isn’t discussed enough when debating whether to commit to Jalen Hurts is his contract status. Hurts is entering the third year of a four-year rookie contract. He is eligible for a new contract following the 2022 season. There are really only two outcomes. The best one for the Eagles if Hurts starts in 2022 is that he improves and is better than he was in 2021. That is also the most expensive. If Hurts is the starter all of next season he will not play the fourth year on his rookie deal. He, wisely, will do everything he can to get a new, lucrative contract instead of playing out the final year at a base salary of just $1.3 million. If Hurts doesn’t play well, then the Eagles don’t have to pay him, but they will be looking for a new contract anyway.

** Only uses 1 first-round pick: The issue with trying to go with a veteran quarterback? The draft capital it will take. Almost any scenario where the Eagles acquire either Aaron Rodgers, Russell Wilson or Deshaun Watson will require them to trade all three (or at least two plus other picks) of their first-round picks. For that level of quarterback play, it might be worth it. An advantage of drafting a rookie, however, is the Eagles get to take a chance on a quarterback they (presumably) feel has a higher ceiling than Hurts while only using one of their three first-round picks. The Eagles might not have to move up from No. 15 to get a quarterback, but even if they do, it likely won’t cost much to do so. Drafting a quarterback gives the Eagles two more first-round picks to work with, striking a nice balance between (potentially) upgrading the most important position on the field while also being able to address other needs on the roster with the other two first-round picks.

** Small step back for a (potentially) big step forward: One issue many have with a rookie quarterback is that it, in theory, sets the timeline for winning back. The Eagles were a playoff team this year. Ideally, with Hurts under center again, you would like to see them take a step forward. Expecting a rookie to make the playoffs in his rookie season wouldn’t be fair to that rookie.

The reality, as has been repeated and debated for weeks in Philadelphia, is that the Eagles made the playoffs this year despite not being an elite team. They took advantage of a bad schedule, won the games they were supposed to and got in. Things change quickly in the NFL, but as of now the schedule doesn’t look much more difficult next season. There are plenty of winnable games outside of the division, and in the division, the Giants and Washington remain dumpster fires.

The expectations for the Eagles might change slightly if they go with a rookie, but they might not realistically change by much — but if they find a legit, franchise quarterback in the draft, the team could view it as a small step back for a big step forward.